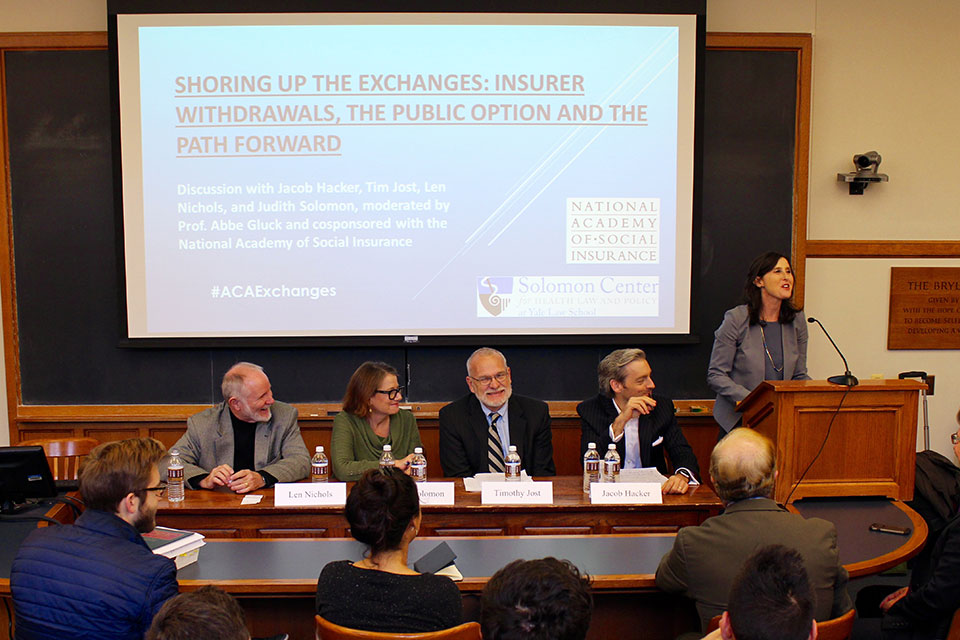 On October 28, 2016, the Solomon Center for Health Law and Policy at Yale Law School and the National Academy of Social Insurance co-hosted a panel discussion on the future of the Affordable Care Act (ACA) and its insurance marketplaces, commonly known as “exchanges.”

The panel, entitled “Shoring Up the Exchanges: Insurer Withdrawals, the Public Option, and the Path Forward," featured four ACA experts. The panelists were Tim Jost, Emeritus Professor at the Washington and Lee University School of Law; Judith Solomon, Vice President for Health Policy at the Center on Budget and Policy Priorities; Len Nichols, Director of the Center for Health Policy Research and Ethics (CHPRE) and Professor of Health Policy at George Mason University; and Jacob Hacker, Director of the Institution for Social and Policy Studies and Stanley B. Resor Professor of Political Science at Yale University. William Arnone, Chief Executive Officer of the National Academy of Social Insurance, gave introductory remarks. The panel was moderated by Professor Abbe Gluck ’00, Faculty Director of the Solomon Center.

The panelists began the event by giving statements that framed issues with the ACA’s exchanges, including why consumers are facing fewer choices and higher premiums on the exchanges. The panelists also focused on the complexity of the ACA’s implementation and the reasons sicker, more expensive patients are enrolling through the exchanges. Solutions offered included increasing subsidies for low-income consumers and a public option that would allow people to buy into a public health insurance plan similar to Medicare.

As a group, the panel discussed what the next president’s highest legislative and administrative priorities should be in order to stabilize the ACA’s exchanges. The panel also answered questions from the audience about concerns such as drug pricing and insurance premiums outside the exchanges.