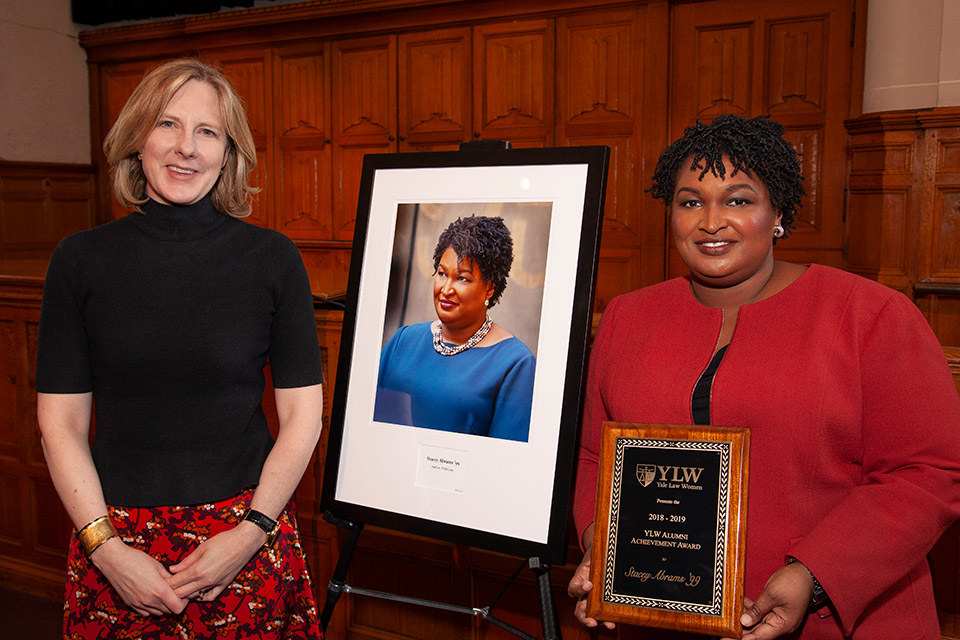 On April 17, 2019 the Yale Law Women (YLW) presented its Alumni Achievement Award to Stacey Abrams ’99. Abrams is the first woman to lead either party in the Georgia General Assembly and the first African American to lead in the Georgia House of Representatives. She is also the first Black woman in the United States to be a major party nominee for governor and the first Black woman to give the response to the State of the Union address.

Funtelar began by discussing the significance of the event. “These walls are hung with portraits of white men, but today we get to add a picture of an incredible, inspirational woman of color,” she said.

As a woman of color herself, Funtelar said that “it is a great privilege to be able to honor and recognize an Alumni who is paving a path for [her]self, and many others, to see themselves reflected in the law.” Funtelar stated that YLW “wanted to honor [Abrams’s] courage, and conviction, her principles, and her fight for justice.”

Clark then introduced Abrams and discussed Abrams’s accomplishments and the impact that her success has had on women, especially Black women. “Stacey Abrams has staunchly protected the rights and interests of women and people of color throughout her career.” Clark remarked that Abrams’s success in the political sphere was “the first time that many Black women, especially Black women from Georgia” like herself, “have felt seen and taken seriously on the political stage. In [Abrams] we saw a reflection of ourselves, our community, and our future as major players in the political process.”

READ: PDFs of the complete remarks by Funtelar and Clark.