Studying Criminal Justice from the Inside Out 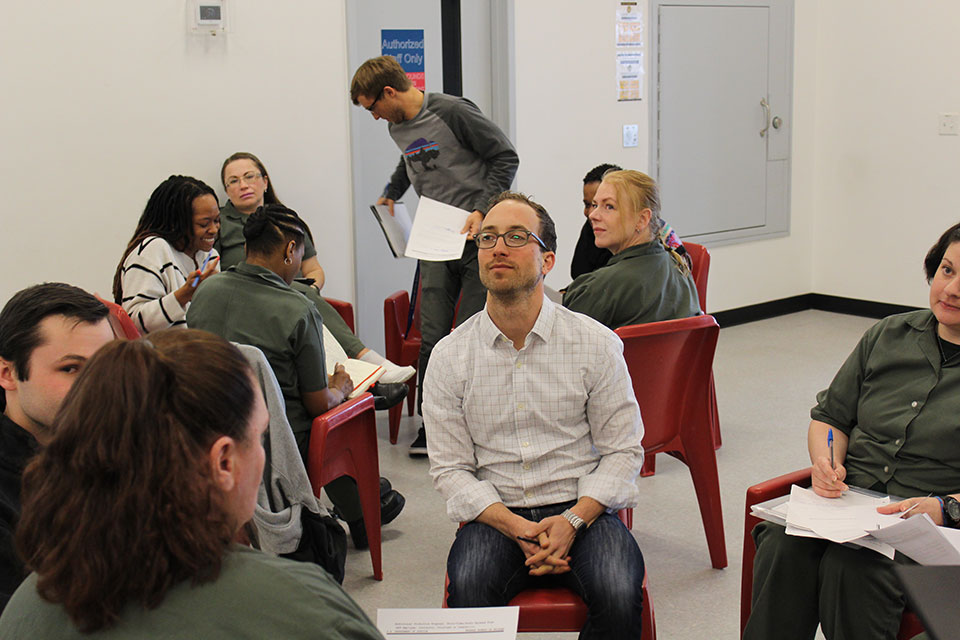 Professor James Forman Jr. has taught many classes that he is passionate about throughout his time in academia. But there is one class that clearly stands out. It doesn’t take place at Yale Law School. In fact, it doesn’t even meet on a college campus.

This class meets inside a prison.

After receiving training through the international Inside-Out Prison Exchange Program at Temple University, Forman began teaching this criminal justice course in 2017, alternating between the Federal Corrections Institution in Danbury and the Carl Robinson Correctional Institution in Enfield.

“I had been thinking for a long time about how I could make more of a direct contribution to improving the quality of education that people who are incarcerated get because we have never had good education programming in prisons,” said Forman, who has always had an interest in education. In 1997, Forman founded the Maya Angelou Public Charter School in Washington, D.C., an alternative school for school dropouts and youth who have previously been arrested.

“I knew that I wanted to do something to respond to that, and I also knew that it would have tremendous benefits to law students to be able to study criminal justice alongside people who have had direct experiences with the system itself.”

Forman’s class consists of 10 “outside” students from Yale Law School and 10 “inside” students from the prison who meet weekly for engaging, interactive discussions with one another. The class alternates between a men’s and women’s prison each semester and inside students span a range of ages and backgrounds.

“Inside students and outside students is the language we use and that is to avoid labeling people as prisoners or inmates,” explained Forman.

Lori Pompa, Founder and Executive Director of the Inside-Out Prison Exchange Program at Temple University, said Forman is one of only a handful of other professors teaching a law class in prison as part of their program.

“This started with people teaching courses about criminal justice, but it now spans the social sciences and humanities and indeed to law courses,” said Pompa. “We want to expand the law school piece further and have Inside-Out courses in law schools around the country.”

Pompa started the program more than 20 years ago, inspired by visits with her own students to a prison in Pennsylvania. Seeing the power of the conversations that took place, Pompa formalized the program over time, developed specific methodology and trainings, and watched as it grew quickly and organically across the country and even to other countries.

“Literally as we speak right now, there are Inside-Out classes happening all over the country and the world,” said Pompa. The program has trained nearly 1,000 people to teach courses at more than 150 correctional institutions, reaching as many as 40,000 students.

“Because this class is very much engaged learning and dialogue-based, the conversation goes to some very deep places,” explained Pompa. “I can’t quite explain it, but people bring their whole selves to this learning experience.”

That is what Forman has experienced too with each of the classes he has held over the past two years.

During his classes, he often breaks up the group of 20 into smaller groups of five to have individualized conversations on a topic that they bring back to the group. The syllabus explores why people commit crime, victims and victimization, prosecutors and public defenders, how the prison system works, restorative justice, and overcoming adversity. Students also write weekly reflection papers. 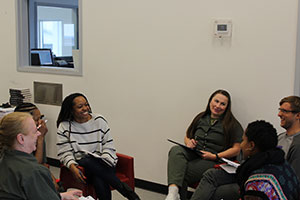 The core goal of the course is to broaden and deepen students’ understanding of how the criminal justice system was created and what can be done to reform and improve it. It also seeks to develop bonds and break down barriers that society has set up which separates people who are incarcerated from people who are not.

“You can study all of those things in the classroom, and we do,” said Forman. “But there is something deeper here with an opportunity to study these issues alongside people who have actually seen it in their day-to-day operation. Those are precisely the things that can get lost when studying legal text.”

Warden William Murphy, who works at the Enfield prison, said the benefits are considerable for the “inside” students too.

“The Inside-Out program offered at the Carl Robinson Correctional Institution quickly generated interest amongst the offender population,” said Murphy. “The research has shown us that educational opportunities reduce recidivism. When we have the ability to partner with Yale University, offer college level courses, work toward our goal of reducing recidivism, and witness a significant level of interest and excitement, we call this a win-win scenario.”

Michael Linden ’19 said the Inside-Out class appealed to him because it presented the opportunity to engage directly with those who have been impacted by the criminal justice system.

“The class was one of the most rewarding in my law school career,” said Linden. “Getting insight into academic issues from students who are living the curriculum is an unparalleled learning experience. I feel incredibly lucky to have been given this unusual opportunity, and to have met such resourceful, motivated students.”

Isabella Uría ’19 said the unique course taught her a great number of lessons about our criminal justice system and the many injustices that are endemic to it.

“The topics we covered were fascinating but most impactful was the discussion and debate engendered by our readings within the classroom,” said Uría. “We sat within the library of Carl Robinson Correctional Facility, always seated in a circle around the room, next to our inside classmates, who challenged us to think critically and compassionately in a way that would not necessarily occur in a removed Yale Law classroom. When examining the law, it is imperative that we not remove ourselves from those upon whom the law is imposed.”

Perhaps the biggest lessons from the course, however, did not come from the syllabus, but instead from unscripted moments created with students sharing a “thing of beauty” at the start of each class — a tradition Forman learned from Professor Jean Koh Peters. Whether it’s a photo, poem, story, or inspirational quote, sharing this sentiment enables students to get a glimpse into each other’s lives and backgrounds.

“One of the things that I find so amazing about the class is each week you see the students get more personal and intense in what they share,” said Forman.

“A Yale student will share a story of overcoming adversity the likes of which the inside students never thought about,” Forman said. “They never knew that a Yale student could have lost a family member to violence or have been arrested or incarcerated or suffered from depression.”

And the Yale students are often stunned by the intellectual depth of many of the inside students as they speak profoundly about the adversity they have faced and reflect on their experiences in the prison system, Forman noted.

“By the end of the class, there are a lot of tears,” Forman said.

These enlightening and often emotional lessons about the true toll of the criminal justice system are what stick with the students long after the class ends.

“I learned resiliency, and the power of community and trust in a place where those features are often lacking,” said Linden. “It was amazing to see how the classroom vibe developed over time, as students became more comfortable with one another and began to share their life stories. I learned that it’s impossible to capture the lived experience of incarcerated people with words…while it’s easy to see incarcerated people as a monolith, they aren’t. We do a disservice to their experience by assuming otherwise.”

“The shared things of beauty provided insight into each of our individual worlds, our values, our joys, and our pain,” added Uría. “These pockets of beauty and humanity were revealed in a stark, gray, and at times oppressive institution of a prison. There is no way, in my mind, that one could experience this course without being fundamentally changed and without a sense of urgency that profound reform is needed.”