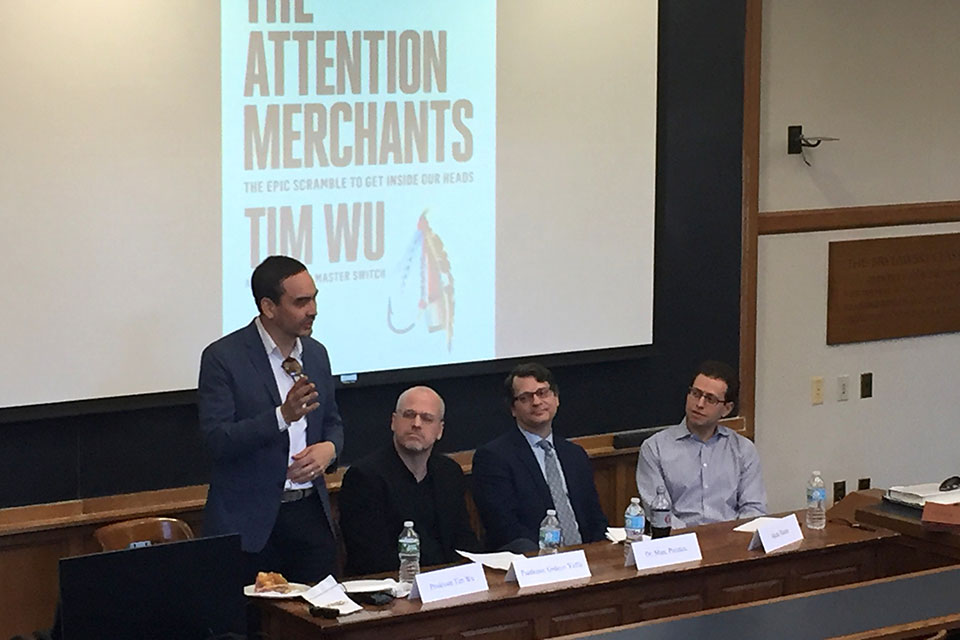 On Tuesday, April 18, the Solomon Center for Health Law and Policy, in collaboration with the Yale Health Law and Policy Society, Asian Pacific American Law Students’ Association, and Information Society Project, welcomed Professor Tim Wu of Columbia Law School for a discussion of his book, The Attention Merchants: The Epic Scramble to Get Inside Our Heads. Wu was joined by Professor Gideon Yaffe (Professor of Law, Philosophy & Psychology, Yale University), Professor Marc Potenza (Professor of Psychiatry, Yale School of Medicine), and Mark Hanin ’17 for a panel discussion.

The Attention Merchants takes a historical approach to understanding how the marketing industry has so successfully captured human attention. Wu discussed three key turning points in advertising history: the emergence of penny press newspapers funded by advertisers in 1830s New York, the advent of full-on advertising campaigns in World War I-era Britain, and now the overwhelming use of internet algorithms, such as Google AdWords, that tailor internet advertising to users’ history and interests. These historical moments, Wu argues, track the increasing commodification of human attention.

Following Wu’s presentation, the three discussants shared the implications of his research in a variety of fields. Yaffe explored the dangers of “attention stealing” for human perception, arguing that the prevalence of advertising is dangerous, in part, because it affects human understanding of which information is most valuable. Potenza discussed how, from a psychiatry and child development perspective, individual differences in attention can have a large impact on an individual’s life trajectory and health status. Finally, Hanin considered potential opportunities for government intervention and suggested that tech companies and advertisers be called upon to justify how they elevate certain types of messages through advertising.

Professor Wu is currently the Isidor and Seville Sulzbacher Professor of Law at Columbia Law School and has served in DOJ’s Office of Legal Counsel, the FTC, and the New York Attorney General’s Office. He graduated from McGill University and Harvard Law School, later clerking for Judge Richard Posner and Justice Stephen Breyer.