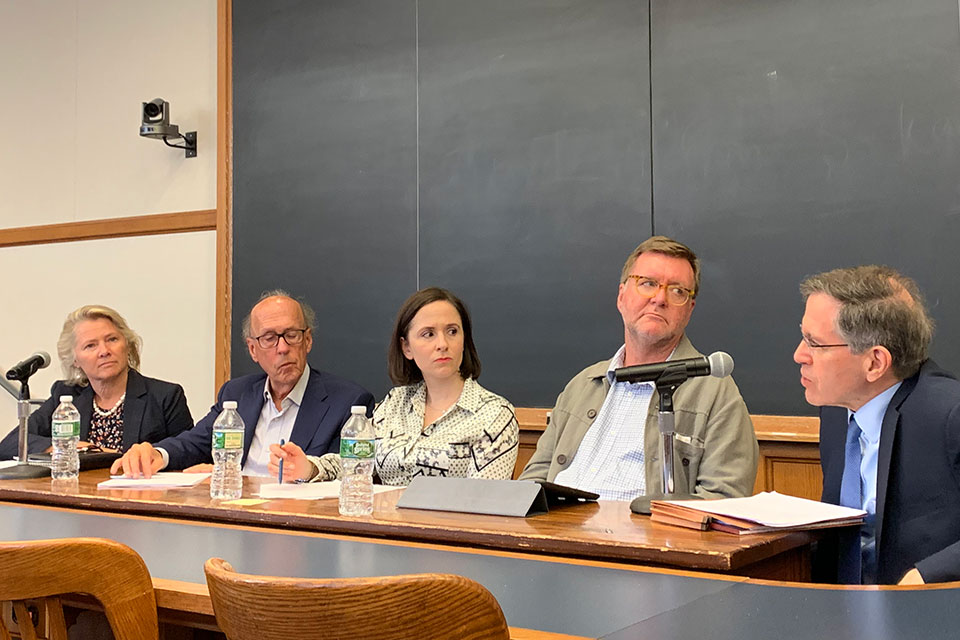 The panel addressed the contours of U.S.-China competition, how trade disputes are bleeding into security issues, and how U.S.-China relations may shape the world in the decades to come.

In his opening remarks, Professor Gewirtz remarked that U.S.-China relations have been on a “downward spiral on virtually every front,” and both sides need to endeavor for a constructive relationship in their own interests.

Westad disputed the notion that the two countries are embarking on a new "Cold War." “We can learn from the Cold War,” he said, “but it is not a useful descriptor.” He noted that China is competing vigorously with the United States but not looking to usurp its position in the global order, and that China’s own domestic politics had deteriorated and become much more authoritarian in the past five to six years. “When they are going out of their way to criticize ‘Reform and Opening’ that took a bankrupt and totalitarian country and created the new China, then something is going very wrong with the politics in China,” he said.

Speaking from a foreign policy perspective, Mira Rapp-Hopper described the current state of U.S.-China relations as “competition with undefined parameters.” She said that China is not going to either completely accept or reject the existing system and the U.S. needs to set the rules before Beijing’s norms take hold. “The stake of this moment is the international order,” she said, adding that “envisioning the future is an exercise in imagination of epic proportions.”

Roach focused on the economic picture and emphasized his view that the current administration, which is locked in trade disputes with more than 100 countries, will not find a bilateral solution to a multilateral problem. Structural interdependence between the two countries and China’s unwillingness to give ground on what it views as issues of principle make economic conflicts intractable.

Speaking from nearly three decades of experience in U.S.-China diplomacy, Susan Thornton stressed that the key questions is what American interests are and what kind of China policy can best serve them.

In his concluding remarks, Gewirtz encouraged the students to be active in current U.S.-China relations: “This is your future and you are going to be living with these issues no matter where you come from,” he said.