Before the pre-motion conference began, immigrant New Yorkers, elected officials, and allies rallied outside of Brooklyn Borough Hall to show support for Mr. Batalla Vidal’s case and applaud his courage in coming forward to stand up for his community. 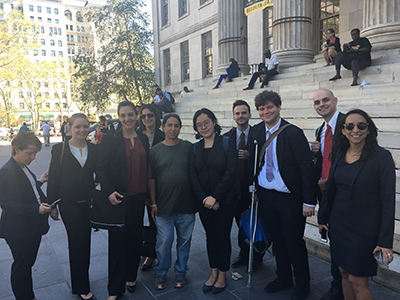 Mr. Batalla Vidal, a 26 year old New York City resident who initially obtained a three-year work permit under Obama administration’s 2014 immigration relief initiatives, later had his permit limited by one year when a federal judge in Texas, Andrew Hanen, issued a sweeping, nationwide preliminary injunction in United States v. Texas. Batalla Vidal’s case argues that the Texas injunction should not apply in states like New York, as it was not party to the suit blocking the immigration initiatives, known as Deferred Action for Parents of Americans and Lawful Permanent Residents (DAPA) and expanded Deferred Action for Childhood Arrivals (DACA). New York, along with 15 other states and the District of Columbia, filed a joint brief in Texas v. U.S. which argued against the injunction and emphasized the benefits that DAPA and expanded DACA would have for their states.

Immigrant New Yorkers, Brooklyn Borough President Eric Adams, and New York City Councilmembers Carlos Menchaca and Antonio Reynoso rallied together outside Brooklyn’s Borough Hall before the hearing Thursday to show solidarity with Batalla Vidal and to express support for this case, which would create a path for the implementation of DAPA and expanded DACA for millions of immigrants in New York and across the nation.

“We stand proudly with Martín as he proceeds with this case, which is a light in the darkness for millions of immigrants like me,” said Magdalena Brito, a Make the Road New York member with two US-citizen children, who would benefit from DAPA. “We hope the judge will rule correctly and permit expanded DACA and DAPA to move forward, which will help keep my family, and millions of families like mine, together and bring economic improvement to New York and dozens of other states.”

In 2015, the federal government relied on Judge Hanen’s injunction to revoke or limit three-year work permits from thousands of expanded-DACA recipients across the country, including Batalla Vidal. This case challenges the scope of Judge Hanen’s injunction, arguing that it should not apply to states like New York, who had not filed suit against the programs in the first place.

“Judge Hanen denied security and stability to thousands of New Yorkers without even hearing from them,” said Amit Jain ’18, a law student intern in the Worker and Immigrant Rights Advocacy Clinic at Yale Law School. “Martín is standing up to ensure that his voice is heard. We are thrilled to stand with him today.”

Announced in 2012, DACA allows some young undocumented immigrants, such as Batalla Vidal, who came to the U.S. as children, to live and work in the country temporarily if they meet certain eligibility requirements. In November 2014, the Obama Administration sought to build on the success of that initiative by expanding eligibility requirements to additional immigrant youth and by creating the DAPA program, which would similarly allow some undocumented parents of U.S. citizen and lawful-permanent-resident children to live and work in the country temporarily. At the same time, the Department of Homeland Security announced that new and renewing DACA applicants would be approved for three-year, rather than two-year, periods. U.S. Citizenship and Immigration Services began issuing three-year work permits that same month.

In December 2014, Texas and 25 other states sued to stop the implementation of DAPA and expanded DACA. In February 2015, Judge Hanen issued a nationwide injunction blocking both programs. The case made its way to the U.S. Supreme Court, which in June of 2016 deadlocked 4-4, with no decision issued.

“An overly broad injunction has unjustly denied millions of immigrant families an opportunity to leave fear and uncertainty behind and move on with their lives,” said Karen Tumlin, legal director at the National Immigration Law Center. “Thanks to our inspiring plaintiff, Martín, there’s now a chance that at least some of them will be able to get relief. We are grateful for his willingness to speak out for himself and others.” Batalla Vidal’s home state of New York, and many others, have attested to the benefits of DACA and DAPA, including before the U.S. Supreme Court. Approximately 60 percent of individuals eligible for DAPA and expanded DACA live outside of states involved in the Texas case.