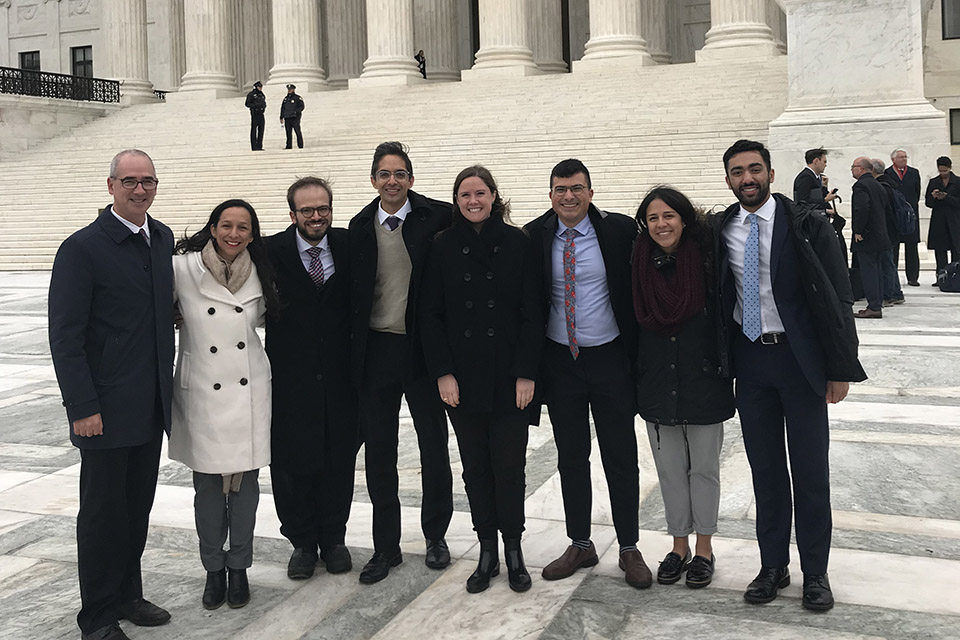 Today, the U.S. Supreme Court heard arguments in a case brought by the Worker and Immigrant Rights Advocacy Clinic (WIRAC) and co-counsel, along with other related cases, challenging the Trump Administration’s recission of the Deferred Action for Childhood Arrivals (DACA) program. The case, which could affect over 700,000 individuals enrolled in the DACA program, alleges that the government failed to abide by basic principles of federal administrative law when it terminated the program.

“By terminating DACA, President Trump has deliberately upended the lives of hundreds of thousands of young people. That is a violation of this country’s administrative law and cannot stand." — Camila Bustos ’21

“It is high time that the Supreme Court considered the enormous cost that the rescission of DACA would inflict upon individuals with DACA, their families, their workplaces, and their communities,” said Ramis Wadood, ’21, law student intern in WIRAC at Yale Law School. “The government has consistently sought to evade accountability for its arbitrary and capricious decision to terminate DACA. We hope that the Court will hold this administration to account.”

Batalla Vidal v. McAleenan, the first lawsuit that sought to challenge the termination of DACA, was brought by six New York DACA recipients and the advocacy organization Make the Road New York. In June, the Supreme Court granted certiorari in Batalla Vidal and other related cases, and consolidated them. At issue in the case is whether the government’s justification for terminating DACA rested on an erroneous legal conclusion or, if not, otherwise complied with the Administrative Procedure Act.

“By terminating DACA, President Trump has deliberately upended the lives of hundreds of thousands of young people. His administration chooses to hide behind a poorly reasoned, inadequately explained legal determination. That is a violation of this country’s administrative law and cannot stand,” said Camila Bustos, ’21, law student intern in WIRAC at Yale Law School.

The Supreme Court need not issue a decision before its term ends in June 2020. For now, injunctions from three U.S. district courts keep DACA in place for current recipients, allowing them to renew their protections under the program. The Batalla Vidal plaintiffs are represented by WIRAC, the National Immigration Law Center, and Make the Road New York.