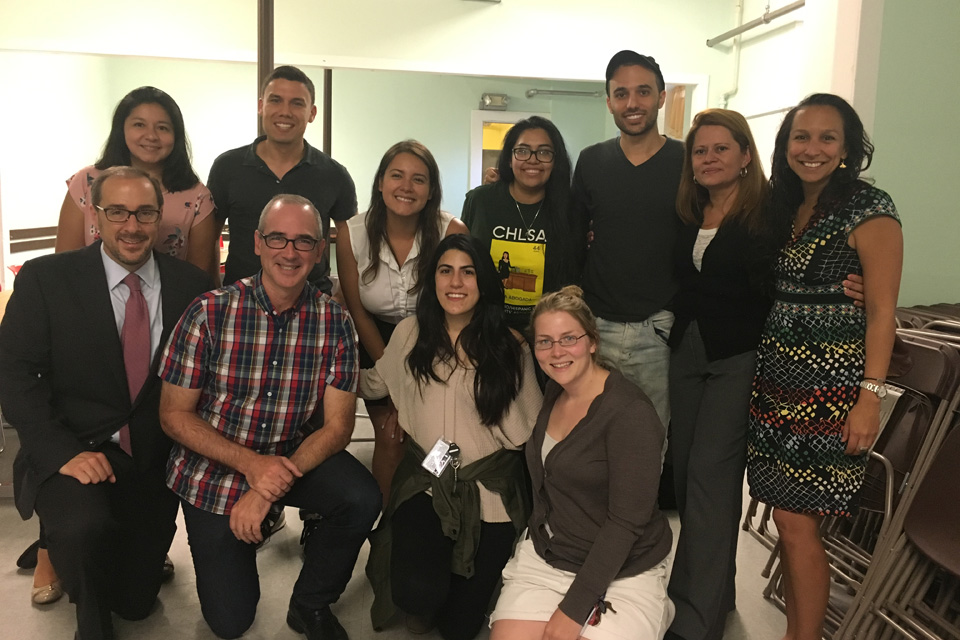 Students and faculty from the WIRAC Clinic with their client, Ms. Chavarria (second from right).

A Norwalk mother of four who sought sanctuary in a New Haven church to avoid deportation was granted an emergency stay this week thanks to the swift action of the Worker & Immigrant Rights Advocacy Clinic at Yale Law School. The order means that Nury Chavarria can stay in the U.S. while her lawyers fight in court to keep her here with her children.

Students from WIRAC got involved on Friday, July 21, 2017, after Chavarria’s immigration attorney called to seek assistance on her case. The call came a day after Chavarria had sought sanctuary at the Iglesia de Dios Pentecostal church in Fair Haven. Two WIRAC student interns, Jessica Cisneros ’17 and Yusuf Saei ’17, conducted an emergency intake that afternoon and early evening.

By the next morning, the team had grown by six. Within a matter of days, the WIRAC team drafted two motions and assembled declarations and evidence in support of the court filings.

On Wednesday July 26, 2017, the team filed an emergency motion to stay removal and a motion to reopen proceedings. Just about an hour later, Judge Philip Verillo of the Immigration Court in Hartford, Connecticut granted a stay of removal pending consideration of the motion to reopen.

Chavarria, who is 43, applied for asylum shortly after she fled Guatemala but her case was denied. In 2010, she was given a one-year stay of removal on humanitarian grounds. That stay was extended annually until this year, when she was told she would have to leave, according to the clinic. Advocates say the circumstances of her case have changed because of stepped-up immigration enforcement under Trump.

Chavarria's case has drawn enormous attention and support from across the state and the nation. This past weekend, hundreds of people rallied in front of the church to support Chavarria.

“Helping Nury go home to her family made every ounce of effort worth it,” said Cisneros. “We are excited to have obtained a stay so quickly, and seeing ourselves make a difference is such a powerful feeling.”

A motion to reopen asking the court to reexamine Chavarria’s immigration case is pending with the Hartford Immigration Court. The motion asserts multiple grounds for relief from removal, and is based both on significant changes in immigration law and new evidence that the Immigration Court has not had the opportunity to consider.

The Worker & Immigrant Rights Advocacy Clinic (WIRAC) represents immigrants and low-wage workers in Connecticut in labor, immigration, trafficking, and other civil rights areas, through litigation for individuals and non-litigation advocacy for community-based organizations.