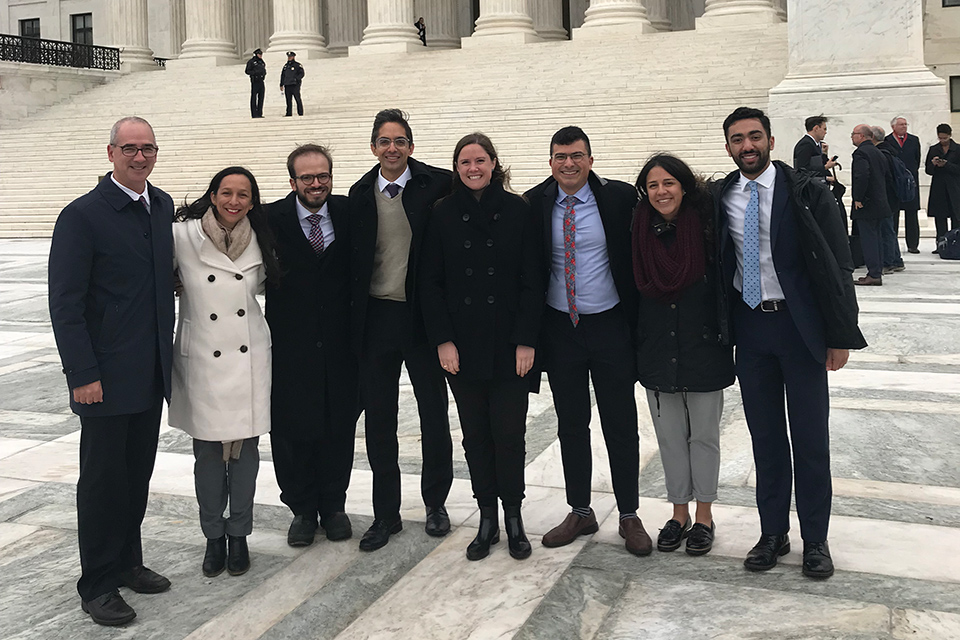 On June 18, 2020, the U.S. Supreme Court struck down the Trump administration’s attempt to terminate the Deferred Action for Childhood Arrivals (DACA) program, ruling that the Administration’s efforts to end DACA violated federal law. The Worker and Immigrant Rights Advocacy Clinic at Yale Law School together with several other legal organizations were the first in the nation to file a legal challenge on the DACA rescission in 2017 and has seen the case all the way through leading up to this monumental decision.

The Court’s decision to overturn the Trump administration’s termination of DACA is a monumental victory for nearly 700,000 DACA recipients, who can now continue to safely live, work, and study in the United States. The decision also returns DACA to its initial form and reopens the DACA program to new applicants. All eligible individuals are encouraged to consult with an immigration attorney to apply for, or renew, their DACA immediately.

“Today marks a historic victory for immigrant youth who have led the fight for respect and dignity for all communities,” said Martín Batalla Vidal, a member of Make the Road New York and a lead plaintiff in Wolf v. Batalla Vidal. “We took our power to the streets, the hallways of Congress, to the highest court in the land and we won. For almost three years we have been living with immense uncertainty, and today we are able to breathe a sigh of relief. Nonetheless, our fight does not end with the decision by the Supreme Court, our fight continues for permanent protection for DACA recipients and all undocumented people.”

The Court’s decision comes after a long string of federal courts blocked the Trump Administration’s termination of DACA in 2017 and 2018. Wolf v. Batalla Vidal, the first lawsuit that sought to challenge the termination of DACA, was initially brought by six New York DACA recipients and the grassroots organization Make the Road New York (MRNY). They are represented by WIRAC, the National Immigration Law Center (NILC), and lawyers at MRNY. The Supreme Court consolidated Batalla Vidal with other related cases, and heard arguments on them on November 12, 2019.

“We are thrilled that the Supreme Court chose to protect the nearly 700,000 DACA recipients currently living in the United States, not to mention their families and communities. The high court is right to reject the Trump Administration’s callous attempt to revoke a program as important for communities across the United States as DACA,” said Ramis Wadood ’21, a law student in WIRAC at Yale Law School.

“During his time in the White House, President Trump has been unrelenting in his attacks on immigrant communities in the United States — from jailing and deporting thousands, to severely restricting lawful immigration, to militarizing the border. At the insistence of courageous immigrant communities and their allies who sued the Trump Administration, courts have stepped in to stop those illegal and horrifying attacks from time to time. This is an incredible victory fought for and won by the very people Trump continues to want to exclude from our country. Today’s Supreme Court decision is a great day for our country,” said Marielena Hincapié, Executive Director of the National Immigration Law Center.

According to advocates and community partners working on the case, the Supreme Court’s decision is a welcome reprieve from the Trump Administration’s assault on immigrant communities, but DACA recipients and other immigrants will only be fully protected by Congressional action. The potential for future attacks on DACA recipients highlights the need for a legislative solution that more permanently secures immigrants’ right to live in the United States.

“We celebrate today’s decision, and we renew our commitment to combating the Trump Administration’s unwavering hostility towards immigrants and people of color. As the Trump Administration continues to make our immigration system more cruel, immigrant youth and many other people in our communities are still in need of permanent solutions that secure their futures here at home. We will continue our fight for justice for all,” said Javier H. Valdés, Co-Executive Director of Make the Road New York.