A report released today examining the U.S. response to the 2014–2015 Ebola epidemic warns against politically motivated and scientifically unwarranted quarantines, which the report found violated individuals’ rights and hampered efforts to fight the disease by discouraging American doctors and nurses from going abroad.

The report was written by students and faculty of the Yale Global Health Justice Partnership (GHJP), which is a joint program of the Yale School of Public Health and Yale Law School, and the staff of the American Civil Liberties Union. The foreword was written by the president of Doctors Without Borders/Médecins Sans Frontières USA, which was the primary international medical aid group that fought the Ebola outbreak in West Africa. 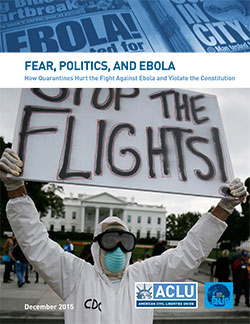 “The Ebola quarantines and other movement restrictions put in place throughout the nation beginning in late 2014 were motivated by fear and by politics, not by medical science,” Gregg Gonsalves, Co-Director of the Yale GHJP says. “We need to learn from the mishandling of the U.S. Ebola epidemic that wasn’t, and respond to future health scares with smart policies based on decades of scientific evidence, not reactive policies based on misinformation and political grandstanding. Punitive and scientifically baseless approaches violate the law and make us less safe.”

The 2014–2015 Ebola epidemic killed approximately 11,000 people in Guinea, Liberia, and Sierra Leone. Many American health professionals traveled to the region to help, as they have for decades in past outbreaks of Ebola and other infectious diseases. The science is clear on the fact that the Ebola virus, while very dangerous for those infected, is difficult to catch. People without symptoms are not contagious. In order for Ebola to spread, a person must come into direct contact with the bodily fluids of someone who has fallen ill and the risk of transmission is highest later in the disease. Nevertheless, when the Ebola aid workers returned home, many faced unprecedented restrictions on their personal freedom even though almost none developed symptoms of the disease.

“When health care workers return from an Ebola outbreak, we take necessary precautions and monitor our health,” said Dr. Deane Marchbein, president of Doctors Without Borders USA. “But there was and continues to be no medical reason to quarantine and stigmatize asymptomatic health care workers upon returning home. The treatment of health care workers as public health risks is not grounded in science, and it takes an unnecessary toll on us, our families, and on efforts to properly combat outbreaks. We must ensure that policies at home reflect established medical science, not fear.”

In October 2014, the Ebola death of Thomas Eric Duncan in Dallas, a Liberian who was visiting family, and the infection of two of his nurses, sparked a wave of media coverage and inflammatory comments from politicians. States around the country imposed quarantines and other restrictions on people coming to the U.S. from the affected countries regardless of whether they showed any symptoms of Ebola.

The report calls the Centers for Disease Control’s response better than many states’. The agency admitted that it made some mistakes in communicating potential risks early on, which, the report says, inadvertently helped to allow fear-mongering to take hold around the country.

Guidelines from the CDC do not recommend quarantines for people not showing symptoms, but the guidelines are not binding. By December, at least 23 states had announced quarantine and movement restriction policies that exceeded the CDC guidelines. The exact number of people quarantined or otherwise restricted in their movements is unknown, but the report’s review of media reports shows that hundreds of returning aid workers were affected. The report found that these people were illegally deprived of their right to due process under the Fourteenth Amendment because the quarantines and movement restrictions were not scientifically justified.

In the most prominent case, New Jersey Governor Chris Christie instituted a mandatory 21-day quarantine policy for all returning health care workers. Kaci Hickox, a Doctors Without Borders nurse who volunteered in Sierra Leone, was held in a tent outside a Newark hospital for three days before being allowed to return to her home state of Maine under an in-home quarantine. That lasted four days until a judge, following a law that gave Hickox the right to a hearing, ruled the entire quarantine unnecessary. Hickox, represented by the ACLU of New Jersey, has filed a lawsuit against New Jersey officials over her imprisonment.

“Public policy in the United States, motivated by misinformation and unwarranted fear, resulted in scientifically unjustified quarantines and other restrictions,” Amy Kapczynski, a professor at Yale Law School and faculty director of the GHJP says. “These measures primarily affected returning health care workers, who deserved to be celebrated as heroes rather than treated as pariahs.”

The consensus of the medical community is that the best way to prevent diseases like Ebola from spreading to the United States is to fight them at their source. But the report found numerous cases of health workers who were discouraged from volunteering because of the new policies. For example, International Medical Corps reported a nearly 25 percent drop in recruitment from the United States after quarantine restrictions were put in place.