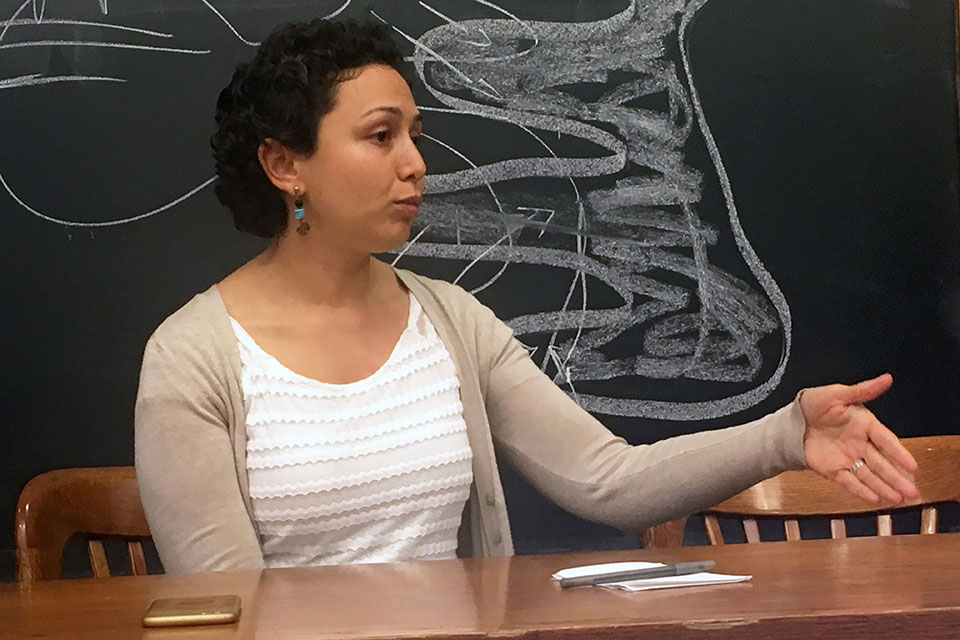 Egyptian feminist and human rights advocate Yara Sallam visited Yale Law School on April 19 to discuss “The Challenge of Being a Woman Human Rights Defender in Egypt.” The event was co-sponsored by the Gruber Program for Global Justice and Women’s Rights, the Program on Refugees, Forced Displacement, and Humanitarian Responses at the MacMillan Center; and the Schell Center for International Human Rights.

Sallam is an attorney directing the Criminal Justice Unit at the Egyptian Initiative for Personal Rights (EIPC). A prominent, longtime activist, she returned to Egypt after working on human rights issues in The Gambia to litigate on behalf of women arrested at the demonstrations in Tahrir Square during the 2011 revolution. Since then, she has served as the Women Human Rights Defenders Program Manager at Nazra for Feminist Studies and as a researcher on transitional justice and freedom of religion and belief at EIPC. In 2014, she was unlawfully imprisoned for protesting an anti-protest law.

Sallam would be wary, however, of attributing too much significance to her impressive credentials. In her talk (which took the form of a group conversation) she discussed what it means to be a woman human rights defender—and advocated for expanding the title’s definition to include less recognized organizers.

She described the ultimately successful effort to make the Egyptian activist community acknowledge the unique danger faced by women participating in the public sphere, namely sexual assault. She also fought against a pervasive assumption in the advocacy community that, for women, rape is the price of activism. Though she felt that these goals were largely accomplished, Sallam noted that the newfound focus on women human rights defenders extended only to a group of “elite activists”: prominent, Cairo-born, left-wing, English-speaking, and unveiled. “I would never be invited here,” Sallam contended, “if I were face veiled.” For instance, a woman arrested at a sit-in and frequently tortured in prison did not qualify for protection under a program intended to help women human rights defenders because, Sallam said, she lacked a “sexy” profile—she came from a conservative family outside of Cairo.

Sallam did not understand why the international human rights community would be so restrictive in its choice of whom to protect. Since that case, she has been working to redefine the term “woman human rights defender” by meeting with other female activists who do not fit the traditional definition but whom she considers woman human rights defenders nonetheless: teachers organizing for better pay or agricultural workers.

Throughout the conversation, Sallam touched on other concerns, including the negative connotations of feminism, the role international pressure can play in promoting human rights in Egypt, and prison issues. She condemned what she identified as a widely held sense in Egypt that everyone should be tried, and “it should be fast and it should be painful.” She also disapproved of feminists’ celebration of harsher sentences for sex offenders, asserting that prison is never the best solution.