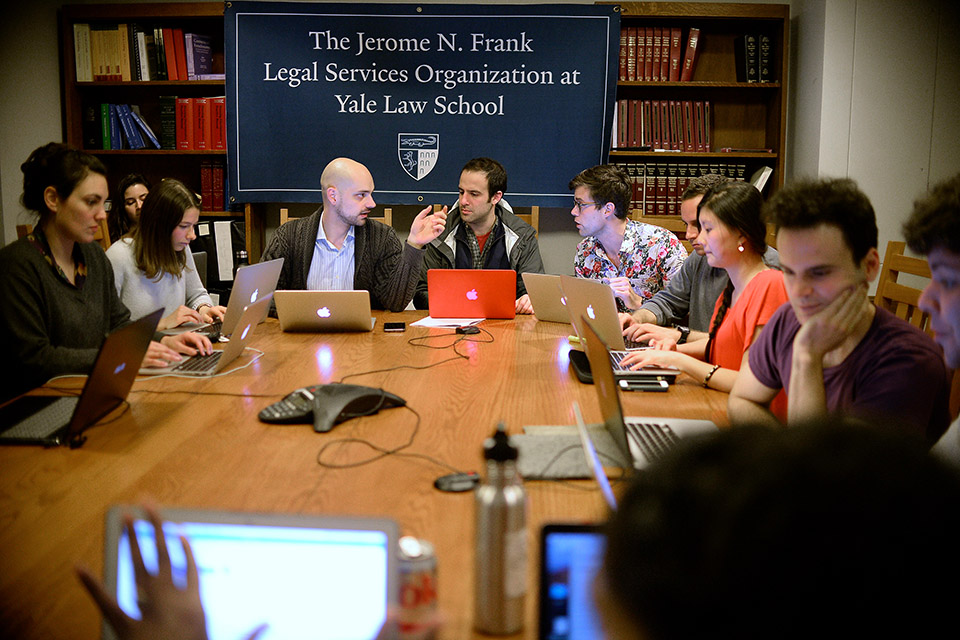 In the early morning of January 28, 2017, the Worker & Immigrant Rights Advocacy Clinic (WIRAC) at Yale Law School joined the nation’s leading civil rights groups in filing the first legal challenge to the Trump Administration’s executive order banning refugees and other immigrants from certain countries from entering the United States. The complaint, brought on behalf of two Iraqi men who were targeted for their assistance or connections to the U.S. military and who were approved for resettlement in the United States, was filed in federal court in the Eastern District of New York

As a result of the legal action, the Honorable Judge Anne Donnelly of the District Court for the Eastern District of New York issued a temporary stay at the national level late in the evening on January 28, 2017.

Mr. Darweesh served the U.S. government from 2003 to 2013 as an interpreter, electrical engineer, and contractor. He was deemed by the Chief of Mission to have “provided faithful and valuable service to the United States”— service which put his life at great risk—and received an Iraqi Special Immigrant Visa (SIV) as a result. Despite being in possession of a valid visa to relocate to the United States, Darweesh was separated from his family and detained upon landing at JFK Airport.

Mr. Alshawi received a Follow to Join (FTJ) Visa to reunite with his wife and seven-year-old son—both lawful permanent residents—in Houston, Texas. Alshawi’s family had assisted the U.S. military and as a result of his family’s connections to the United States was the target of an insurgent IED attack. In response, Alshawi and his wife were forced to relocate from Baghdad. Alshawi was issued a valid travel documentation on January 11, 2017, but was nevertheless detained at JFK Airport.

“Had a group of lawyers not acted, these men could have been wrongfully removed on the first flight out this morning,” said Amit Jain ’18. “And there are dozens of others at JFK Airport detained pursuant to the executive order. It is crucial to take quick action to challenge those detentions before individuals are removed from the United States and sent back to places where they are in real physical danger.”

“The Trump Administration may have a bully pulpit, but we have the full force of the Constitution behind us,” said Karen Tumlin, Legal Director at the National Immigration Law Center (NILC). “We will not tolerate these attacks on our values.”

"It is heartbreaking to hear that the immigration freeze has impacted the Special Immigrant Visa program,” said John Rowan, National President and CEO of Vietnam Veterans of America. “Men and women of my generation have lived with 50 years of regret from having left the loyal Vietnamese who served alongside us in combat behind when our war came to an end. Many of them were slaughtered, others tortured and sent to so-called re-education camps. We cannot allow history to repeat itself, and let this executive action inflict another generation of troops with a lifetime of guilt by allowing ISIS and the Taliban to kill our friends. America must fulfill her promise to Iraqi and Afghan nationals who served alongside US troops that we promised safe harbor to — not only because it is a moral necessity — but because it sends a message that America keeps its promises to its allies.”

NILC is co-counsel on the case, along with the American Civil Liberties Union, the International Refugee Assistance Project, and Kilpatrick Townsend & Stockton LLP.

A habeas corpus petition, along with a motion for class certification, was filed Saturday to protect Mr. Alshawi, Mr. Darweesh, and others from being immediately removed.

The Worker & Immigrant Rights Advocacy Clinic represent immigrants, low-wage workers, and their organizations in labor, immigration, criminal justice, civil rights, and other matters. The clinic is part of the Jerome N. Frank Legal Services Organization (LSO) at Yale Law School, which provides legal representation to individuals and organizations in need of legal services but unable to afford private attorneys.

The International Refugee Assistance Project (IRAP) is a student-founded and student-run organization with chapters at Yale Law School and at almost two dozen law schools in the U.S. and the Middle East, working to improve the plight of Iraqi refugees. IRAP was founded by Yale Law students in the summer of 2008.

Memorandum in Support of Motion to Stay