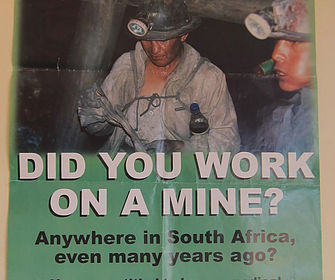 In June 2012, with support from Open Society Initiative for Southern Africa (OSISA), the Gruber Foundation at Yale, and the GHJP, faculty traveled to South Africa to develop a comprehensive research agenda regarding compensation for silicosis and tuberculosis acquired through gold mining; unanswered questions about these diseases’ epidemiology and their interaction with HIV; and clinical management of all three illnesses. The impetus was an ongoing public health crisis wherein mine workers with occupational lung disease, as well as their families and communities, both in South Africa and labor-sending countries lack access to sufficient resources and effective remedies to protect and/or improve their well-being.

Since then, the GHJP has worked closely with South African partners on various aspects of the research agenda. This has included the preparation of a policy paper analyzing the weaknesses in South Africa’s statutory compensation system for occupational lung disease; comparing it to other compensation structures around the world; and offering recommendations and insights for policy reform. The paper, undertaken by students in the GHJP’s practicum course and based on information-gathering done in the U.S., South Africa, and Swaziland, is being shared with stakeholders, including activists, medical practitioners, and government officials (read the press release here). Moreover, the GHJP brought two key voices on mining and health to Yale as senior fellows in residence in 2012-2013: Fatima Hassan, a human rights lawyer, activist, and now head of the Open Society Foundation for South Africa, and Dr. Rodney Ehrlich, a physician and epidemiologist from the University of Cape Town.

Future objectives in this ongoing GHJP agenda will include advocating for compensation policy reform and undertaking additional research and advocacy tasks as they emerge, in cooperation with partners in South Africa.