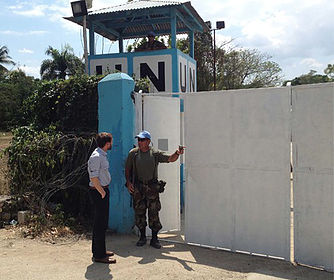 The United Nations negligently caused a deadly cholera epidemic in Haiti, and has legal and moral obligations to remedy this harm, according to a report issued in August 2013 by GHJP and the Transnational Development Clinic, in collaboration with the Haitian Environmental Law Association (L’Association Haïtienne de Droit de l’Environnement (AHDEN). The report, “Peacekeeping without Accountability,” is the result of more than a year of research, both in the U.S. and Haiti, and provides the first comprehensive analysis of the cause of the massive outbreak of cholera in Haiti—which has killed more than 8,000 people and sickened more than 600,000 since it began in 2010. The report examines the role the U.N. played in precipitating the crisis and the U.N.’s responsibilities to provide legal remedies to victims of the epidemic.

“While the U.N. has played an important role in the Haitian post-earthquake recovery effort, it has also caused great harm to hundreds of thousands of Haitians,” said Tassity Johnson (YLS 2013), one of the authors of the report. To date, the U.N. has refused to consider the claims of approximately 5,000 Haitians seeking redress, invoking its immunity in concluding that the claims are “not receivable.”

The epidemic continues, and public health experts estimate it will take a decade or longer to eliminate cholera from Haiti. Prior to this outbreak, cholera had not existed in Haiti for more than a century.

“Peacekeeping without Accountability” provides a comprehensive set of recommendations outlining the steps the U.N. and other principal actors in Haiti should take to meaningfully address the cholera epidemic. The report calls for setting up a claims commission, as well as providing a public apology, direct aid to victims, infrastructural support, and adequate funding for the prevention and treatment of cholera. It also emphasizes that the prevention of similar harms in the future requires that the U.N. commit to reforming the waste management practices of its peacekeepers and complying with its contractual and international law obligations.

In January 2016, the journal PLOS Medicine published new research by scientists at Yale School of Public Health, in partnership with GHJP’s Gregg Gonsalves and Ali Miller, that shows that simple and inexpensive interventions  —which the United Nations has yet to implement—would be effective in preventing future outbreaks of the bacterial infection, alongside, of course,  basic good practices to control sewage.

In September 2016, GHJP and the Transnational Development Clinic coordinated an open letter from 40 law, health, and human rights experts urging the UN Secretary General to follow its recent acceptance of responsibility for its role in the Haiti cholera crisis with a response that is robust, transparent, and protects both victims’ rights and health.  The open letter is available here.  The response from the Deputy Secretary General is available here.