The “Snowball Effect” of Mentoring 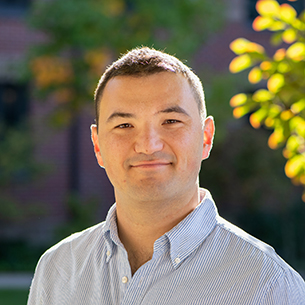 The terror attacks of Sept. 11, 2001 are among Devin Froseth’s most vivid childhood memories. Watching how the nation came together after the atrocity was one of his main inspirations to join the U.S. Army. The other was his grandfather, who had served in the Army in both Korea and Vietnam. No one in his family had gone to college, so Froseth never seriously considered it. “I always saw myself as someone who joined the military after high school,” he explains. He departed his home city of Tampa, Florida six days after his 18th birthday.

Froseth enlisted as “the most junior rank possible — Private.” His first job was as an air defense systems maintainer who helped with the servicing of missile launching stations and radar systems in Okinawa, Japan. “Then I got very lucky as a young soldier,” he said. He found two great mentors, officers who helped him to realize that he had potential and if he demonstrated initiative, he could earn a college education and achieve other personal goals. The officers, Lance and Laura, helped 19-year-old Froseth with the application process for the United States Military Academy at West Point, where he was accepted. This encouragement and college acceptance, Froseth says, “had a snowball effect on the rest of my life.”

Anecdotally, it’s fairly uncommon for enlisted servicemembers to enroll at West Point. According to USMA’s Class Characteristics data from the past 15 years, 4-20% of each class is admitted with “prior service.”  Froseth was grateful for the opportunity and his mentors and knew that, when he became an officer, he wanted to do the same for others. It was an indebtedness he felt not just to his own mentors, but to the Army for all of the opportunities it had provided him.

After West Point, Froseth was stationed in Germany with a military intelligence unit that worked closely with America’s European allies and partners. He later moved to New Haven to manage the region’s Army recruiting. He said, “Watching some of my subordinates and peers get promoted ahead of schedule or receive awards that they worked for, and knowing that I had a part in helping them succeed — or overcome adversity — is really what drove me as an officer.” One highlight for Froseth was receiving the news that his report, Eddie, a noncommissioned officer (enlisted servicemember), had earned an early promotion to the rank of Sergeant First Class, a position with much greater responsibility.

Froseth’s education at West Point gave him a strong sense of membership in a distinguished profession. As he began to think about how he might next serve society, he was struck by the parallels between his work as an Army Captain and the work of lawyering.

“As an officer, a lot of what you do is advising: understanding situations and finding solutions, and then advising a commander on the best course of action to take,” Froseth said. “The law is similar in a lot of ways: you’re advising a client in solving difficult problems.”

Froseth hopes to continue serving the country — and his home state of Florida in particular — as a lawyer. Perhaps he will spend some time in private law after graduation, but he suspects that he will ultimately end up in government or public interest law. As he researched law schools, Froseth said Yale Law School’s reputation and tradition stood out to him.

“The United States Military Academy is central to the profession of arms. I saw Yale as analogous for law: a lot of the ideas that dominate the legal profession now were thought of by professors or students here,” Froseth said. “I chose Yale Law School because I wanted to be as close as I could be to the center of the legal profession.”