Leading People in the Field 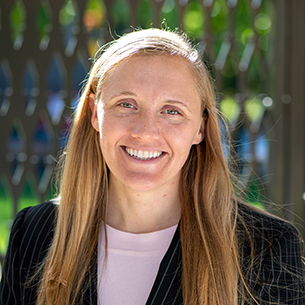 Educated at the U.S. Naval Academy to serve as an officer in the U.S. Navy or the U.S. Marine Corps, Margo Darragh ’25 chose the Marines because, she said, “I knew I liked being part of a team, and I wanted to work with people.” Darragh was drawn to the Marines’ role as our nation’s “rapid reaction force” — the teams on the ground providing aid in response to humanitarian disasters, for example.

As active duty approached, Darragh considered which Marine Corps career most interested her, unaware that certain paths were closed to women. Then all of a sudden, they weren’t — in January 2016, just a few months before her graduation, the Department of Defense opened all military occupations and positions to women. Darragh became the first female combat engineer officer assigned to one of the formerly restricted ground combat units. In her role as platoon commander, Darragh led a team of 50 enlisted Marines through their training in California and their deployment in Southeast Asia.

Darragh’s unit specialized in the use of explosives, a responsibility she did not take lightly. One week in particular that tested her leadership skills was spent in bilateral training exercises with the Royal Thai Marine Corps in a remote Thai jungle. With the help of a translator, the two teams shared knowledge, strategy, and skills around the use of explosives to achieve tactical objectives on the ground, with Darragh as the commanding American officer. “My Marines really kept me on my toes. I would joke with them that they were taking years off my life every day,” Darragh remembered. “But in the most dangerous moments, they looked to me to either make a decision or to be the calming force, so I tried to be really deliberate, making sure that I was treating them how I would want to be treated if I was in that position.” During those years, she built the team she had hoped for, not only as a leader but as a learner. “My Marines taught me so much, and they still do,” she reflected.

Meanwhile, Darragh followed the news and issues she cared about back home, including the escalating opioid epidemic, which is devastating her hometown outside of Pittsburgh, Pennsylvania, and communities across the country. While she found her six years in the Marine Corps extremely fulfilling, she said, “I knew that I didn't want to be a bystander the next time that something like OxyContin hits the market.” Inspired by the recent successful litigation against opioid manufacturers and distributors, Darragh said that hearing stories of attorneys general “who are getting justice for parents who have lost children, and for children who have lost parents” made her want to pursue law as her new sphere of impact.

Two factors that drew Darragh to attend Yale Law School in particular as a self-described “legal outsider” were the close-knit community and Dean Gerken’s emphasis on providing opportunities for all students. “As soon as I started getting correspondence from Yale, I felt like I was already valued here,” she remembered. Darragh has so far enjoyed that Yale Law School’s intellectual rigor is embedded within a cooperative learning environment. “There was never a time at the Naval Academy or in the Marine Corps where I wasn't being ranked against my peers, where I wasn't going in every day and having to compete for the opportunities that I wanted,” Darragh said, contrasting it with the fact that YLS 1Ls have a pass-fail first term and the School does not compute class rank. Before, her program of study was largely prescribed. Now, at Yale Law School, she is enjoying the prospect of many open doors. “After my 1L fall term, I get to choose all of my own classes. And being able to join a clinic this spring and start helping people right away — it’s just incredible.”