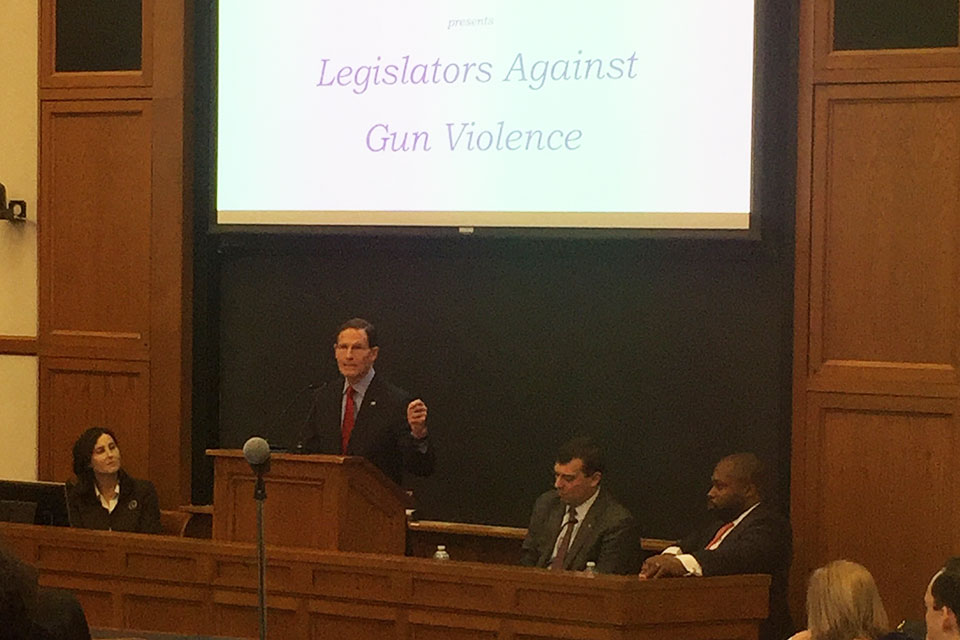 On Thursday, February 20, the Solomon Center for Health Law and Policy hosted a panel discussion with U.S. Senator Richard Blumenthal ’73, CT State Senator Gary Winfield, and CT State Representative Steven Stafstrom on attempting and achieving gun reform at the federal and state levels. The event, moderated by Professor Abbe Gluck, was part of the Solomon Center’s spring series on the epidemic of gun violence in America.

Senator Blumenthal, who has spearheaded the push for federal gun control legislation, opened his remarks by underscoring that “we don’t need to repeal the Second Amendment to uphold commonsense measures against gun violence.” Even after Heller, a decision that significantly expanded the scope of the Second Amendment right, he noted that Congress still has the power to enact a significant amount of reform—although this may be constrained further if the Supreme Court expands gun ownership rights in an upcoming decision in New York State Rifle & Pistol Association v. City of New York.

“I am more hopeful than ever that we can still make progress even during this session of Congress,” the Senator added, citing the Bipartisan Background Checks Act of 2019—which passed the House last year— and the Federal Extreme Risk Protection Order Act that Sen. Blumenthal unveiled with Sen. Lindsey Graham (R-SC).

“Gun violence prevention was on the ballot in 2018,” Sen. Blumenthal noted, urging the Democratic presidential candidates to put the issue “front and center . . . The House members who won made this issue part of their platform—they flipped Republican seats and they won on this issue.”

CT State Sen. Gary Winfield and CT State Rep. Steven Stafstrom, who jointly co-chair the state’s Committee on the Judiciary, described the wave of Connecticut legislation addressing gun reform passed in the 2019 legislative session, including strengthened safe storage law for homes and schools, a ghost gun bill, and a bill criminalizing the storage of unsecured handguns in vehicles.

“The old adage was that you can’t pass more than one gun law a year,” said Rep. Stafstrom. “Senator Winfield and I said no. We put three bills on the House floor very early in the session.” He noted that commonsense reforms like the vehicle safe storage measure had the potential to have a big impact, as guns involved in urban violence in Connecticut come primarily from two places: out of state and unsecured guns stolen from suburban cars.

Sen. Gary Winfield noted that emotion had to play a part in pushing through gun legislation. Even though the public attention focuses on mass shootings, “there is gun violence every day,” said Sen. Winfield. “It’s more banal, slow mass killing that goes on in our urban environment. A conversation about gun violence that deals with everyday gun violence needs to address that.”

“In the months after Sandy Hook, they became a very powerful force with our Republican colleagues,” he stated. “It takes the human approach.”

The legislators then fielded questions from students on federal preemption, anti-commandeering, compromise measures, and shifting the “Overton Window”—the range of policies legislators can back without unduly risking their electoral support—on gun violence prevention measures.

At a reception following the event, students and members of the community were able to engage directly with the legislators, their staff, and other gun reform advocates in attendance.