Susan Rose-Ackerman and Bonnie J. Palifka have published the second edition of Corruption and Government: Causes, Consequence, and Reform with Cambridge University Press. The co-authors update Professor Rose-Ackerman’s 1999 original to include the research explosion that accompanied the fall of the Berlin Wall, the founding of Transparency International, and the World Bank's decision to give anti-corruption policy a key place on its agenda. The book focuses on the institutional and economic roots of corruption, both routine payoffs and “grand” corruption in contracting and privatization. It gives special attention to political corruption and to instruments of accountability. The authors have expanded the treatment of culture as a source of entrenched corruption and added chapters on criminal law, organized crime, and post-conflict societies. The authors outline domestic conditions for reform and discuss international initiatives, including both explicit anti-corruption policies supported by institutions, such as the World Bank and the OECD, and global efforts to constrain money laundering. 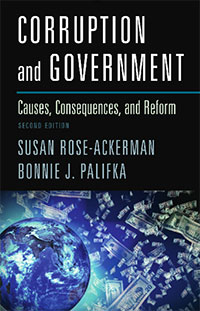 “Bonnie and I sought to incorporate the most important new work on the topic, to acknowledge progress in fighting corruption at the same time as we recognize that much more needs to be done,” says Professor Rose-Ackerman. “This is a topic that is not likely to disappear any time soon as recent revelations involving the World Cup Football Association and the Panama Papers can attest.”

Susan Rose-Ackerman is the Henry R. Luce Professor of Law and Political Science at Yale University. The first edition of her book Corruption and Government has been translated into 17 languages. She is the author of Due Process of Lawmaking: The United States, South Africa, Germany, and the European Union (with Stefanie Egidy and James Fowkes, 2015); From Elections to Democracy: Building Accountable Government in Hungary and Poland (2005); Controlling Environmental Policy: The Limits of Public Law in Germany and the United States (1995); Rethinking the Progressive Agenda: The Reform of the American Regulatory State (1992); and Corruption: A Study in Political Economy (1978). She holds a Ph.D. in economics from Yale University and has held fellowships at the Wissenschaftskolleg zu Berlin, at the Center for Advanced Study in the Behavioral Sciences in Palo Alto, at Collegium Budapest, and from the Guggenheim Foundation and the Fulbright Commission. She has published widely in the fields of law, economics, and public policy, and she has edited nine books on aspects of corruption and administrative law. Her research interests include comparative regulatory law and policy, the political economy of corruption, public policy and administrative law, and law and economics.

Bonnie Palifka is an Assistant Professor at the Instituto Tecnológico y de Estudios Superiores de Monterrey (ITESM), Campus Monterrey in Mexico. She has taught a course on corruption based on the first edition of this book since 2004 at ITESM and since 2011 at Yale University. Palifka has spoken on corruption at conferences in the United States, Mexico, Guatemala, St. Kitts, and France. Her most recent publication is ‘A Review of Drivers of Corruption: A Brief Review, by Tina Søreide’ in the journal Crime, Law and Social Change.