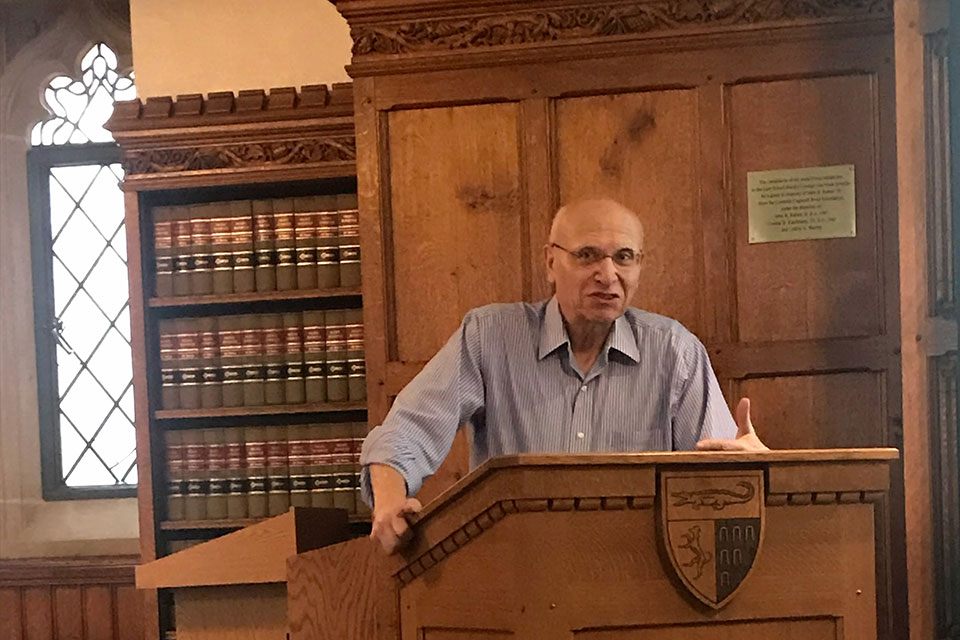 At the Human Rights Workshop on January 24, 2019, Georgetown University Professor of Law and Philosophy David Luban urged his audience to reconsider the “standard narrative” around the CIA’s systematic abuse of terrorist suspects in the 2000s. He argued that conventional interpretations fail to recognize that the CIA developed the methods it used in its rendition, detention, and interrogation (RDI) program long before the publication of the “Torture Memos,” legal memoranda authored by the Bush administration’s Office of Legal Counsel in 2002 that justified the CIA’s so-called “enhanced interrogation techniques.”

Luban explained that the CIA began developing its torture techniques in the 1960s, when it created the KUBARK manual to train its agents to render subjects passive and helpless by inflicting accumulated, intense pressures upon them. In the 1980s, the CIA published an updated version of its program in the Human Resources Exploitation Manuals, with which it trained agents and interrogators in Latin American counterinsurgent police forces.

In the 2000s, the CIA developed the now notorious RDI program. Luban strongly refuted claims made by the CIA that they had “lost institutional memory of earlier [torture] programs” — he pointed out that many CIA “veterans” remained from the 1980s at the time RDI was initiated.

Luban asserted that the RDI program was illegal, in part because it caused terrorist suspects “prolonged mental harm,” which is prohibited under the U.S. torture statute. (He noted with irony that the torture statute was written in an attempt to ban the sorts of techniques that the U.S.’s Cold War adversaries were using on U.S. service personnel abroad.) But Luban said he was unsure whether calling torture “illegal” would sway the 58 percent of Americans who said they are in favor of torture “often” or “sometimes” for people suspected of terrorism. Moreover, the Trump administration has supported torture despite criticisms of the RDI program: President Trump maintained in his first TV interview in office that he believed waterboarding works and insisted that “we have to fight fire with fire.” The administration also drafted an executive order that would have revoked all of the Obama administration’s prohibitions on abusive interrogations.

To Luban, the most misleading part of the standard narrative around the RDI program is the tendency to “focus on the itemized list of torture techniques” contained in the Torture Memos, such as waterboarding, sleep deprivation, and temperature manipulation. Doing so, Luban says, “misses the big point that’s there in plain slight — that the conditions of confinement in Guantanamo were abusive. What makes torture torture is the continuity of abuse — 24 hours a day, 7 days a week.” He added, “The metaphor we use is, ‘who sank the boat?’ It’s not the last one to board or any particular technique — it’s everything together that sinks the boat.”