Solomon Center Distinguished Scholar in Medicine, Bioethics, and the Law Joseph J. Fins, M.D., MACP, FRCP has been selected by the American College of Physicians as the winner of the 2019 Nicholas B. Davis Memorial Scholar Award.

The American College of Physicians (ACP), a national organization of internists, has bestowed the Nicholas E. Davis Memorial Scholar Award annually since 1992 in recognition of “outstanding contributions to humanism in medicine” as well as “scholarly activities in history, literature, philosophy, and ethics.” 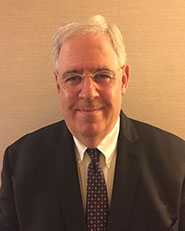 At Yale Law School, Dr. Fins leads the Solomon Center’s Brain Injury Project, a scholarly collaboration that involves Yale Law students and faculty in the work of the Consortium for the Advanced Study of Brain Injury (CASBI) at Weill Cornell Medical College and Rockefeller University Hospital, a consortium that Dr. Fins codirects.

The Brain Injury Project collaboration is grounded in health law, disability law, and equality law and works to affirm and advance the rights of individuals with brain injury in a minimally conscious state through translational research and public policy engagement. Since the inception of the Brain Injury Project in 2015, the collaboration has produced nine scholarly articles coauthored by students, fellows, and faculty. Along the way, Dr. Fins has mentored more than twenty Yale students and three Solomon Center fellows. More on the work and scholarship of the Brain Injury Project can be found on the Solomon Center website.

Student collaborator Adam Pan ’20 stated, “I've worked with Dr. Fins on the Brain Injury Project since my 1L year, and he has consistently been one of the most generous, engaging, and down-to-earth professors that I've interacted with during my time at Yale Law School. Working with him has been one of the highlights of my law school experience.”

Dr. Fins is also a recipient of a Robert Wood Johnson Foundation Investigator Award in Health Policy Research, a Faculty Scholars Award from the Soros Open Society Institute Project on Death in America, a visiting fellowship with the Woodrow Wilson National Fellowship Foundation, and support from the Dana, Buster, and Katz Foundations, among others. He was appointed by President Clinton to The White House Commission on Complementary and Alternative Medicine Policy and currently serves on The New York State Task Force on Life and the Law by gubernatorial appointment. Dr. Fins is an elected Member of the National Academy of Medicine of the National Academy of Sciences, a Fellow of the American Academy of Arts and Sciences, and an Honored Academic of the National Royal Academy of Medicine of Spain.