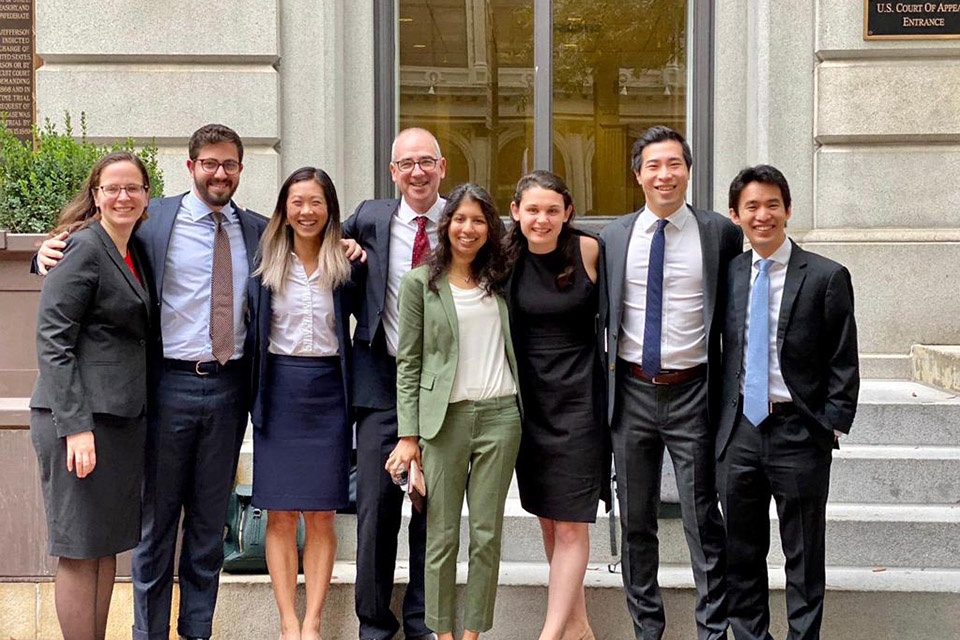 Students and faculty from the Rule of Law Clinic at the Fourth Circuit oral arguments.

The National Association for the Advancement of Colored People (NAACP), Prince George’s County, Maryland, and other plaintiffs won an important appeals court ruling on December 19, 2019, which reinstates their federal suit challenging the federal government’s inadequate plans for conducting the 2020 Census after the district court erroneously dismissed it. The ruling will aid efforts to ensure that the 2020 Census properly counts all people, including historically undercounted communities of color, who are at risk of being missed under the Census Bureau’s current plans. The Peter Gruber Rule of Law Clinic at Yale Law School, Jenner & Block, and the NAACP Office of the General Counsel represent the plaintiffs.

“Mindful of the Supreme Court’s recent guidance affirming judicial review of ‘both constitutional and statutory challenges to census-related decision-making’ . . . we conclude that the district court erred in dismissing the plaintiffs’ Enumeration Clause claims as unripe,” a unanimous three-judge panel of the U.S. Court of Appeals for the Fourth Circuit wrote in an opinion authored by Judge Barbara Keenan on December 19, 2019. The Court directed the District Court to expeditiously proceed with the plaintiffs’ claims under the Enumeration Clause.

Chief Judge Roger L. Gregory added in a concurring opinion: “If Congress is in violation of the Enumeration Clause’s mandate, it cannot take refuge behind the fig leaf of deference to administrative procedure. Nothing is more existential to the preservation of the ‘Republic’ than requiring an ‘actual Enumeration’ without ‘partiality or oppression.’”

The suit, NAACP et al. v. Bureau of the Census, was filed in March 2018. Plaintiffs allege that the Bureau’s deficient plans for the 2020 Census will lead to an undercount of communities of color, leading to decreased political representation and diminished allocations of federal funding for plaintiffs. The suit seeks to ensure the government fulfills its legal obligations to enumerate the entire population.

“Today’s decision moves us closer to our goal of ensuring that African Americans and other historically undercounted communities are fairly and accurately counted in the 2020 census, a necessary predicate to equal representation in Congress and state legislative bodies,” said NAACP General Counsel Bradford M. Berry ’88. “An accurate count will also ensure that traditionally underserved communities receive their fair share of the billions spent each year on federal program payments in such critically important areas as education, transportation, and health care.”

The Department of Commerce is putting hard-to-count populations at risk of a severe undercount in 2020 by slashing field infrastructure, drastically cutting the resources dedicated to community outreach and advertising, and reducing follow up with individuals who do not initially respond to the census questionnaire, according to the lawsuit.

“The government’s decisions about the 2020 Census will have a deep impact on racial inequality over the next 10 years and beyond,” said Robert Ross, President of the Prince George’s County NAACP Branch, which is also a plaintiff in the suit. “By cutting key programs and resources meant to ensure that traditionally neglected communities are properly counted, the government is perpetuating a cycle of political and financial disempowerment.”

“This is a critical step for Prince George’s County, and other traditionally undercounted communities, as we work to ensure that we have the resources and opportunity to achieve a complete count in 2020,” said Prince George’s County Executive Angela Alsobrooks. “As a result of the undercount during the 2010 Census, our County lost out on approximately $363 million in federal funding; money that goes to help us fund schools, infrastructure and healthcare. We are now closer to ensuring that Prince George’s County and other traditionally undercounted communities receive the public resources and political representation they are due.”

The proceedings before the Fourth Circuit stemmed from an appeal by the plaintiffs. In opinions in January and August 2019, Judge Paul W. Grimm of the U.S. District Court for the District of Maryland dismissed plaintiffs’ case. The Fourth Circuit has now reversed Judge Grimm’s decisions and reinstated the plaintiffs’ constitutional claims, while affirming the dismissal of their separate claims under the Administrative Procedure Act.

“This ruling provides hope that some of the decisions that will undercount communities of color can be redressed in time for the 2020 Census,” said Rachel Brown ’20, a law student intern with the Yale Law School Peter Gruber Rule of Law Clinic. Brown argued the appeal together with Jessica Ring Amunson of Jenner & Block LLP, co-counsel for the plaintiffs. “This decision gets us closer to a more just 2020 Census and shines a light on the critical issues at stake in the decennial census,” added Amunson.

Founded in 1909, the NAACP is the nation’s oldest and largest nonpartisan civil rights organization. Its members throughout the United States and the world are the premier advocates for civil rights in their communities.