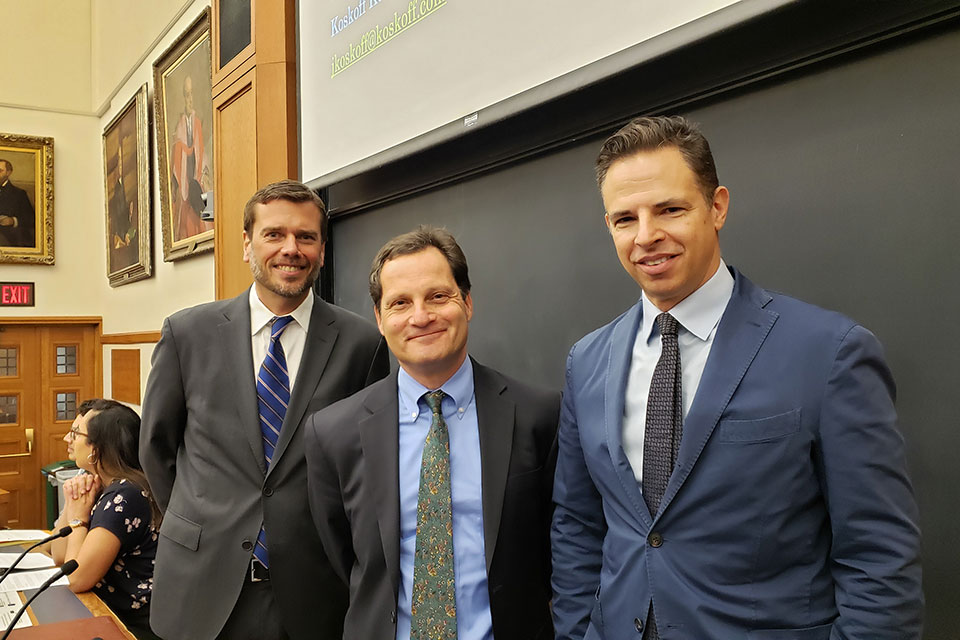 Jonathan Lowy discussed the benefits of litigation as a method to address gun violence prevention. Because guns and gun sales are vastly underregulated relative to other forms of consumer products, litigation can be particularly advantageous. He emphasized how gun manufacturers have contributed to gun violence in two primary ways. First, because guns are exempt from the Consumer Product Safety Act, guns largely lack safety features that are standard for other consumer products. Second, approximately 90% of guns used in crimes are sold by about 5% of dealers. Gun manufacturers could take action to address both of these issues, but typically lack incentive to do so. “Litigation addresses these problems in a unique way,” said Lowy. “Most importantly it internalizes the public social costs of the irresponsible conduct of the gun industry.” In some cases, attorneys obtain settlements through litigation to prevent some of these actions and constrain manufacturers going forward. Litigation can also set precedents for future cases to improve the public’s ability to hold gun companies accountable.

The panelists explained that litigation can be a particularly challenging method to address gun violence, however, due to the passage of the Protection of Lawful Commerce in Arms Act (PLCAA). In 2005, the National Rifle Association (NRA) led the passage of PLCAA, which provides the gun industry with broad and wholly unique protection, relative to other consumer product industries, for gun liability suits. Recently, several court decisions have begun to whittle away at these protections by pressing on the few exceptions that PLCAA provides. One such case is that concerning the families of victims from the Sandy Hook Elementary School, whom Josh Koskoff represents.

Koskoff spoke about this case, known as Soto v. Remington. The named plaintiff in the case is Victoria L. Soto, the first-grade teacher at the Sandy Hook Elementary School, who was killed during the shooting in 2012. When she was found, between her body and that of shooter was a Remington semiautomatic rifle. Koskoff reviewed the history of the semiautomatic rifle, emphasizing the that weapon was created for soldiers. The weapon was created because it was not as heavy as previous war rifles at the time but was equally lethal. In July 1974, a subsequently declassified report on the AR-15 for the U.S. government wrote with respect to the weapon: “The troopers [in Vietnam] have a great amount of respect for the AR-15. If the weapon were adopted as TORS for Airborne Units, there would be a tremendous psychological uplift in the individual soldier’s belief in his ability to shoot and kill.” The Army uses this weapon even today.

The rifle has also crossed over into the domestic market. This weapon saw increased sales in particular after President Obama’s first election. Gun manufacturers have used “aggressive tactics,” Koskoff said, to boost their sales, particularly among men under 25. Remington has paid for product placement in first-person shooter videogames. One advertisement of a rifle stated: “Consider your man card reissued.” They have pushed the vision of a “lone gunman,” says Koskoff.

In Soto, plaintiffs sued Remington under an exception to PLCAA that permits suits of gun manufacturers where they violated state law. The plaintiffs assert that Remington’s advertisements constituted violation of Connecticut law that prohibits unfair trade practices. Despite Remington’s appeal, the Connecticut Supreme Court has permitted this claim to go forward and the Supreme Court of the United States has denied cert. The parties are presently moving forward with discovery.

Adam Skaggs of the Gifford Law Center typically leads defensive cases from the gun industry, where the claims ordinarily center around the Second Amendment. On Wednesday, Skaggs reviewed briefly Second Amendment precedent. “The story of how we got to where we are today is a long and interesting process,” said Skaggs. Heller was landmark Supreme Court case in 2008, in which the Court for the first time recognized the Second Amendment as an individual right, rather than one contingent on militia service. The case was the culmination of a lengthy and organized effort by gun rights advocates to flip traditional Second Amendment understanding on its head. While Heller held that an individual has a right to keep and use a handgun in one’s home, the case has spurred a huge volume of litigation questioning the extent and contours of the Second Amendment right. To date, lower courts have largely upheld existing gun laws. Crucially, Skaggs said, Heller “didn’t answer the methodological question of how [lower] courts should assess Second Amendment claims.” The decision “also left substantive question unanswered.”  Although Heller “made clear that the [Second Amendment] right is not unlimited, it didn’t speak with any detail at all to extent to which it extends outside the home.” This is critical to understanding the constitutionality of laws relating to minimum age, domestic violence, and types of ammunition. Similarly, there remain many questions about the extent of the Second Amendment right when it implicates or intersects with other constitutional rights.

“Fighting Gun Violence in Court” was cosponsored by the American Constitution Society and the Yale Health Law and Policy Society.