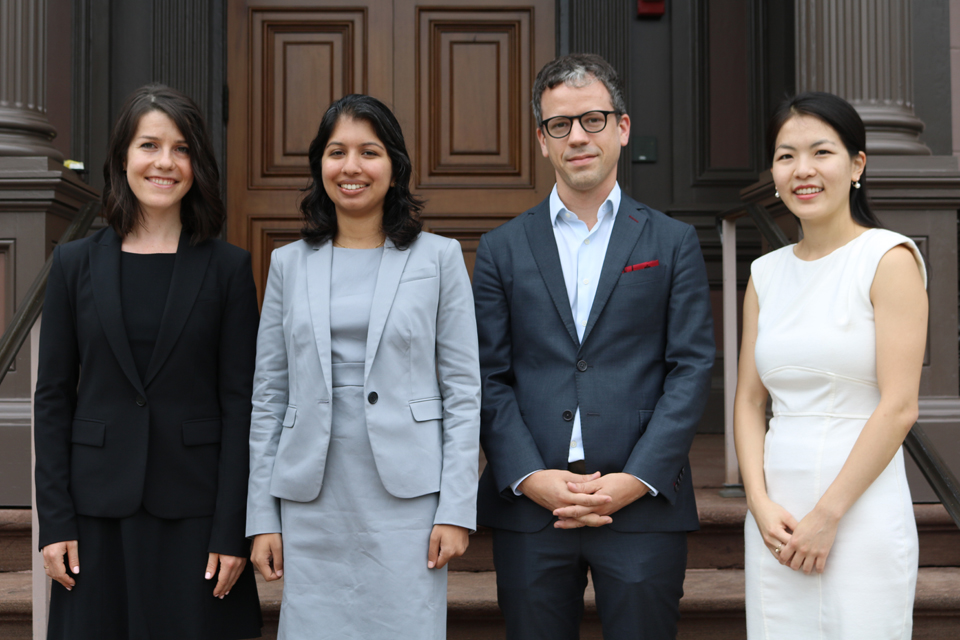 Four Yale Law School students are among the 17 newly named Kerry Fellows who will be working with former Secretary of State John Kerry on leading-edge research and high-profile publications for a global audience as part of Yale University’s Kerry Initiative.

“The Kerry Fellows are an outstanding group of individuals with diverse experiences from all over the world,” said Kerry. “I am inspired by their passion and commitment to making a difference and look forward to working closely with them on today’s most pressing global challenges.”

Nikita Lalwani is the co-president of the National Security Group at YLS, co-director of the International Refugee Assistance Project, and a member of the Yale Law Journal and the Rule of Law Clinic. Before law school, she worked as a staff editor at Foreign Affairs, where she commissioned and edited articles on U.S. foreign policy and international affairs, and helped teach a course at Columbia Journalism School on gender and migration.

Ned Levin is a joint degree candidate at YLS and the Yale School of Management. Before coming to Yale, he was a foreign correspondent for The Wall Street Journal, posted most recently in Istanbul, and previously in Hong Kong. He covered both the Turkish military coup attempt of 2016 and Hong Kong’s Umbrella Movement protests of 2014.

Ellis Liang is earning a JD-MBA at YLS and Yale School of Management. She is a member of the Media Freedom and Information Access Clinic and a student fellow at the Paul Tsai China Center, researching media usage of China’s freedom of information laws. Previously she worked in Hong Kong as a reporter and editorialist for South China Morning Post and The Wall Street Journal.

Alexandra Mahler-Haug’s career is centered on national security, energy, and the environment, spanning government and the private sector, both in the United States and abroad. At YLS, Alex is a director of the Rule of Law Clinic, a volunteer with the International Refugee Assistance Project, and a Teaching Fellow for Professor Akhil Amar '84.

Founded in 2017 by former Secretary of State John Kerry, the Kerry Initiative leverages Kerry’s insights, experiences, and relationships on a global scale, collaborating with students and faculty from across the university and deepening the Yale experience to have greater interaction with the world beyond campus. In partnership with the Yale Jackson Institute for Global Affairs, the Kerry Initiative advances Yale’s long tradition of preparing the next generation of world leaders.