Significant investments are needed urgently and immediately to repair the underfunded public health infrastructure in the United States, which has been further eroded by the ongoing COVID-19 pandemic, a group of Yale legal and public health experts recommend in a new report.

The Yale Global Health Justice Partnership — a collaboration between the Yale Law School and Yale School of Public Health — released the report, “Confronting a Legacy of Scarcity: A Plan for America’s Reinvestment in Public Health,” which outlines a set of proposals to revive public health in the United States.

“For decades, American public health has been grossly underfunded, leaving the country vulnerable to major health crises. In 2020, we found out what this disinvestment means in human terms: we were singularly unprepared for the COVID-19 pandemic and paid the price in close to 600,000 American lives,” said Law School student Margaret House ’22, one of the five students who authored the report.

The report was crafted through intensive research and conversations with more than two dozen of the nation’s leading public health experts, including leaders in local, city, and state health departments, academics and research scientists, clinicians and health commissioners, a former CDC director, congressional staffers, and advocates.

“All of those we spoke to for this report agreed, without a new financial commitment to public health — from the federal down to the local level — we will leave ourselves vulnerable to the next emergency, whether it’s the shock of a new pandemic or the sustained health effects of climate change,” said Dr. Christopher Williams, a Yale School of Public Health Advanced Professional Master in Public Health (MPH) graduate and another of the report’s authors.

“Our proposal rests on two major sources of fiscal renewal for American public health: a new mandatory funding stream from Congress, which can ensure stable, long-term funding for our nation’s core public health efforts, protected from the whims of annual appropriations cycles and then a new set of discretionary funding by Congress to bring American public health up to code over the next several years,” said Yale Law School co-author David Herman ’23.

“Clearly, safeguarding the health of all Americans is worth supporting no matter which party is in charge of Congress or who sits in the White House,” said co-author William Eger, a MPH graduate from the Yale School of Public Health. 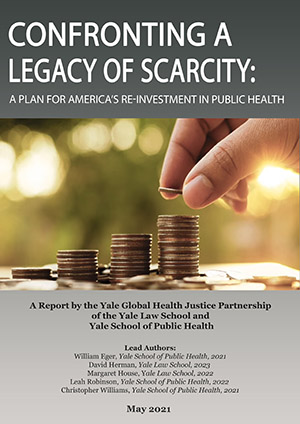 In addition to a new mandatory funding stream for public health in America, substantial increases in annual appropriations are needed to fix the crumbling infrastructure of public health around the country: from old, out-of-date offices and public health buildings to data systems that were incapable of giving a clear picture of the terrible path COVID-19 tore through communities in the past year to the stark shortages in the public health workforce, which lost close to 60,000 people after the 2008 recession, and who never came back.

“You get what you pay for,” said report co-author and designer Leah Robinson, MPH student at the Yale School of Public Health. “The funds allocated for public health in the American Rescue Plan are not enough, as the years of neglect have created a deep hole for us to dig out of in the United States. We are not safe until we have a 21st century public health system from coast to coast in this country and we have to build it together,” she continued.

The consequences of the neglect of public health in America are highlighted in the report’s foreword, written by physician William E. Cooke. Dr. Cooke urges that more predictable, ongoing funding for public health will allow for greater local investment and sustainability so that when disasters like COVID-19 strike, the nation will be prepared.

“The purpose of public health is to prevent events such as this from occurring. Health care disasters don’t just happen; they develop right before our eyes, unseen or ignored until it is too late,” Dr. Cooke writes. “Promoting public health through more predictable, ongoing funding will allow for greater local investment and sustainability. Then, when diseases and disasters — like COVID-19 — threaten our nation, we will be better prepared,” he continued.

The Global Health Justice Partnership (GHJP) is an interdisciplinary research, teaching, and advocacy program that aims to tackle contemporary problems at the interface of global health, human rights, and social justice. The GHJP offers a practicum course each year that engages students in real-world projects with scholars, activists, lawyers, and other practitioners on issues of health justice.