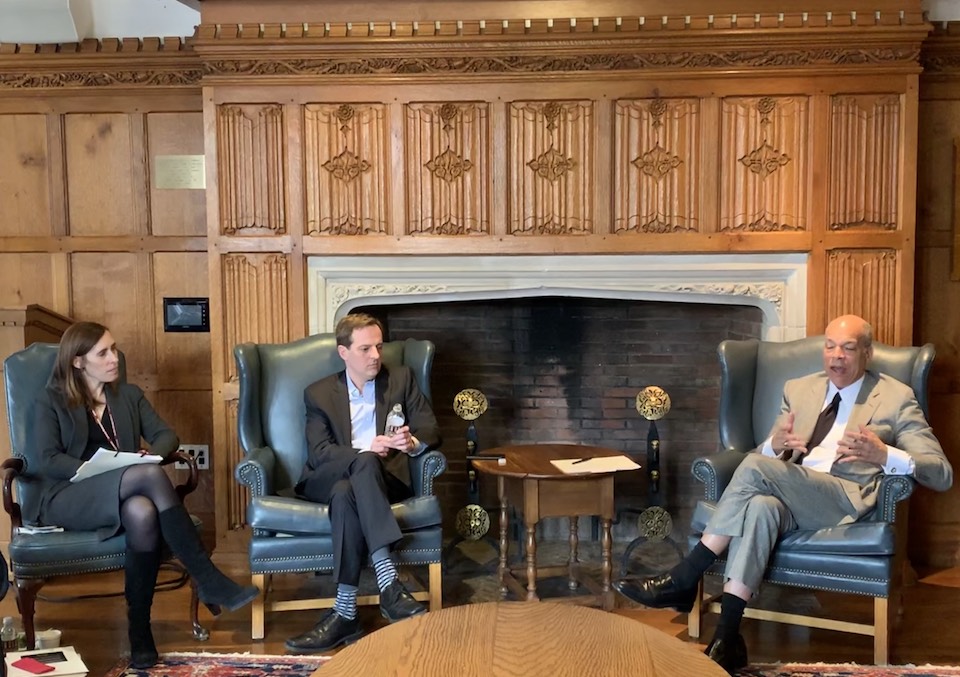 How should a government agency respond to leaks of classified information? And what standards should news outlets adhere to when receiving such leaks?

Former head of Homeland Security Jeh Johnson and journalist Charlie Savage ’03 MSL considered these and related issues in a wide-ranging discussion hosted by the Yale Law School Center for Global Legal Challenges on February 27, 2019. Titled “Government Secrecy and Leaks to the Press: A Discussion,” the event brought together two people who have been at the forefront of U.S. national security policy and its outcomes. Johnson served as the Secretary of Homeland Security from 2013 to 2017 and as the general counsel of the Department of Defense from 2009 to 2012. Savage is a Washington correspondent for The New York Times, covering national security and legal policy in a post-9/11 landscape.

In a conversation moderated by Gerard C. and Bernice Latrobe Smith Professor of International Law Oona Hathaway ’97, Director of the Center for Global Legal Challenges, Johnson and Savage covered how media outlets like The New York Times decide whether to publish leaked information, particularly when government officials urge them not to for national security reasons. The two also discussed what value leaks serve in terms of both informing the public and communicating information across different parts of government.

Finally, Johnson and Savage probed the issue of criminal liability—the prosecution of leakers and reporters. Johnson has publicly supported “going after” leakers but has also cautioned that doing so could have unintended consequences. Others have argued that prosecuting leakers and those who report leaked information threatens traditional press freedoms and raises other risks.

“The opportunity to hear from both a leading national security reporter and a former top official offered a unique window into how both sides navigate responding to leaks of classified information,” said Rachel Brown ’20, a student director of the Center.