Graduates Welcomed Back for Alumni Weekend 2022 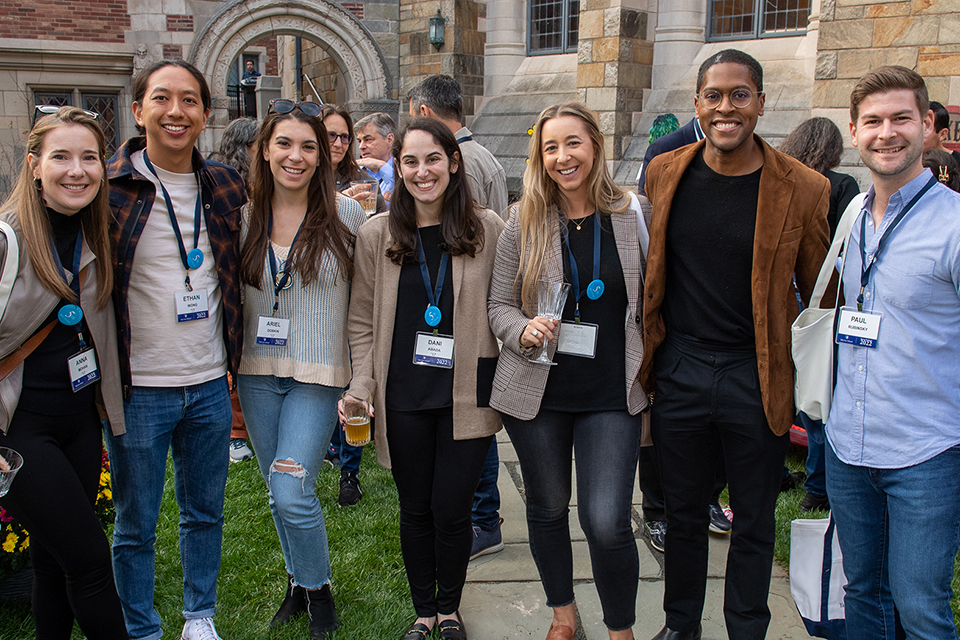 After a three-year hiatus, more than 1,000 Yale Law School alumni and guests gathered in New Haven on October 21–23 for engaging discussions and joyous class reunion events during Alumni Weekend 2022.

At the State of the School address, Dean Heather K. Gerken presented a sweeping review of major milestones and initiatives that have taken place over the last five years.

“How do I think about the mission of the School at this moment?” Gerken said. “This generation is inheriting impossible problems to solve, and it is our job to teach them to solve them.”

Gerken outlined how the School is tackling that mission and leading the way in redefining legal education by ensuring the most capable students have a seat at the table and creating the infrastructure to support them through the launch of two of the biggest programs in the Law School’s history: The Tsai Leadership Program and the Hurst Horizon Scholarship Program, both made possible through the generosity of alumni.

With The Tsai Leadership Program, the Law School has begun to invent a curriculum for the next century as well as to teach critical skills for success across sectors. The program also seeks to build powerful mentorship networks, particularly to help empower first generation professional students and low-income students, Gerken said.

This year, 51 Law School students have received Hurst Horizon Scholarships, which eliminate tuition and fees for students who come from families below the federal poverty line, ensuring a YLS legal education is accessible to everyone. In her remarks, Gerken emphasized that this is only the beginning, and she hopes to expand the scholarship to reach more students in the future.

“The bigger we build this, the more of an influence we are going to have, not just on this place itself, but on legal education,” she said. This month’s launch of the Yale Law School Launchpad Scholars Program, the second pipeline-to-law school program, further cements the School’s commitments to opportunity and equity in legal education and the legal profession.

In front of a packed auditorium, Gerken presented the Award of Merit, the Yale Law School Association’s highest honor, to Catharine A. MacKinnon ’77 and posthumously to Pauli Murray ’65 JSD and Deborah L. Rhode ’77. The Award of Merit recognizes alumni or long-time faculty of Yale Law School who have made a substantial contribution to public service or to the legal profession.

“This year’s recipients not only imagined a better reality but dreamed it into existence. Each of them revolutionized fields that were otherwise dominated by men. They battled systemic inequality in many forms,” Gerken said. She added that as the first woman dean of Yale Law School, bestowing the award on these honorees felt especially personal. “It’s remarkable to be able to honor this extraordinary trio, each of whom played an important role in pushing forward the rights of women,” Gerken said. “The path I have trod is far smoother because of the work that they did.”

Professor Deborah Rhode ’77 was a prolific scholar who wrote more than 30 books on topics including legal ethics, gender, and access to justice. Rev. Dr. Pauli Murray ’65 JSD was a trailblazing scholar and activist for civil rights, human rights, and women’s rights who has been recognized as a saint by the Episcopal Church.

When MacKinnon took the podium, she shared some of her formative Yale Law School memories with the audience and spoke about how her time in New Haven shaped her career. She concluded her remarks by dedicating the award to former Associate Dean of Admissions Jim Thomas ’64. “Jim Thomas made my life in law possible,” MacKinnon said. “That life was far from preordained or inevitable...Actually, for me, it hung by a thread of not happening.”

On Saturday afternoon, Sen. Cory Booker ’97 of New Jersey and Sen. Chris Coons ’92 of Delaware held a conversation with Dean Gerken in the Levinson Auditorium in which they discussed their Yale Law School experiences, including the powerful impact that the clinics and the Law School and New Haven communities had on them, and how they took leaps of faith into public service after law school. The two senators also spoke about the importance of connecting across political divides, especially in such a divisive political moment across the country.

“People think we’re so divided, but we have so much that joins us,” Booker said. “Every day we could do things to change the energy…the solution to this is not a leader, it is millions of acts of grace.”

“We must make it our earnest work to find and embrace and understand across our differences, or we will lose this vital experiment in democracy,” Coons said.

The weekend also saw the dedication of Carol and Gene Ludwig Hall, the newly-renovated home of The Tsai Leadership Program, formerly known as the Cottages. The space adjacent to the Courtyard at the heart of the Law School comes nearly one year after the launch of the transformative program.

“We do more than launch students into marvelous careers — we connect our students to entirely new possibilities, helping them overcome obstacles in their way, and smooth the path for them to become leaders in a wider breadth of fields than they might even imagine,” Gerken said at the dedication as she thanked Carol and Gene Ludwig and the other program founders. “This building is the nexus of that mission.”

Other weekend highlights included a performance of Felon: an American Washi Tale by Reginald Dwayne Betts ’16, a slate of “Amicus Briefs” — short, informative presentations from faculty and alumni on pressing topics — and a YLW+ panel discussion on Rights and Wrong: Gender and the Evolving Court.