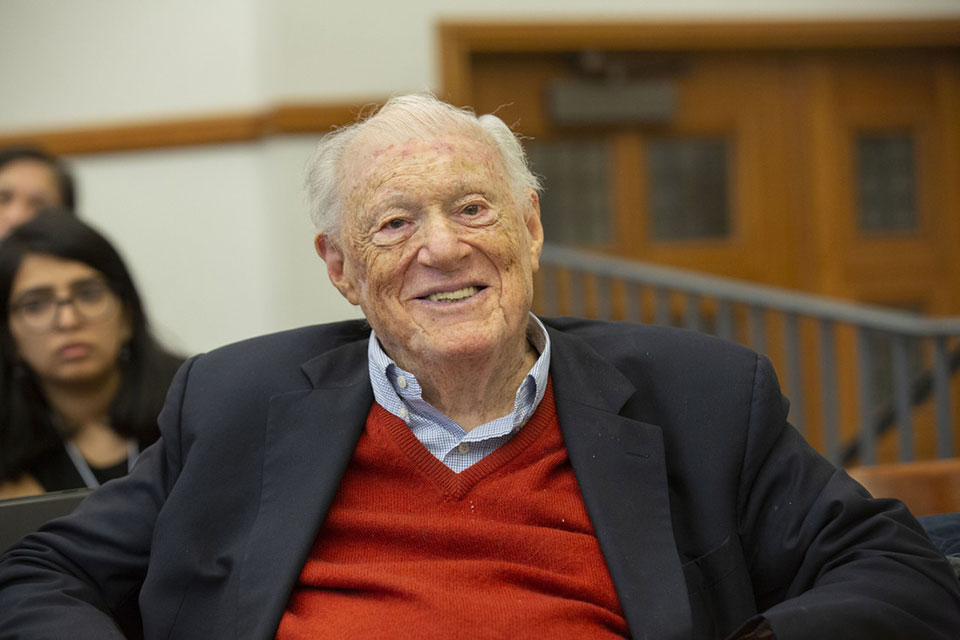 Bob was the founder and former chair of Human Rights Watch. He also served as chairman of the Association of American Publishers (1972–73) and was the founder and chairman of its Committee on International Freedom to Publish (1973–76). He founded the Fund for Free Expression in 1975 and was its chairman until 1990. Bob played a leading role in the campaign to protect Soviet Jews. More recently, he was a strong advocate for respect for human rights in China and was chair of the board of the organization Human Rights in China.

The Bernstein Fellowship was established at Yale Law School in 1997 to honor Robert Bernstein as a tireless champion of human rights. Started by Bob’s wife Helen and their three sons, Peter, Tom, and William, the fellowship is supported by Bob’s family, friends, and colleagues and administered by the Schell Center. Bob never missed the annual Bernstein Symposium, and he became a treasured friend and mentor to the Bernstein Fellows. Jim Silk ’89, Director of the Schell Center, remembered, “Those of us who got to know Bob loved him, and he cared deeply about all of us.”

Bob was one of the first recipients of the Eleanor Roosevelt Award for Human Rights, which was presented to him by President Bill Clinton in a White House ceremony in 1988. He received many other honors, including the Florina Lasker Award from the New York Civil Liberties Union in 1976; the Lawyers Committee for Human Rights (now Human Rights First) Human Rights Award in 1987; the Spirit of Liberty Award from the People for the American Way in 1989; and the Lotus Club Medal of Merit and the Curtis Benjamin Award for Creative Publishing from the Association of American Publishers in 1996. He has received the Barnard Medal of Distinction from Barnard College, honorary doctor of laws degrees from the New School for Social Research and Swarthmore College, and an honorary doctor of humane letters from Yale. He was a member of the Council on Foreign Relations and was Chairman of the Executive Committee of the Aaron Diamond Foundation; he also served on the Advisory Committee of the Carter-Menil Human Rights Foundation and the Advisory Board of the Robert F. Kennedy Human Rights Award.

Bob’s tremendous contribution to human rights was complemented by his prominent career as a publisher, which began in 1946 at Simon & Schuster after he graduated from Harvard and served three years in the U.S. Army Air Corps. He joined Random House in 1957 and became its first vice president in 1962, president in 1966, and chief executive officer one year later. In 1975, he was named chairman of the board and served as chairman, president, and chief executive officer of Random House until 1989. In 1990, he became publisher-at-large of John Wiley & Sons and served for many years as a publishing consultant to the American Museum of Natural History and the New York Public Library.

Read the obituary for Robert Bernstein in the New York Times here.