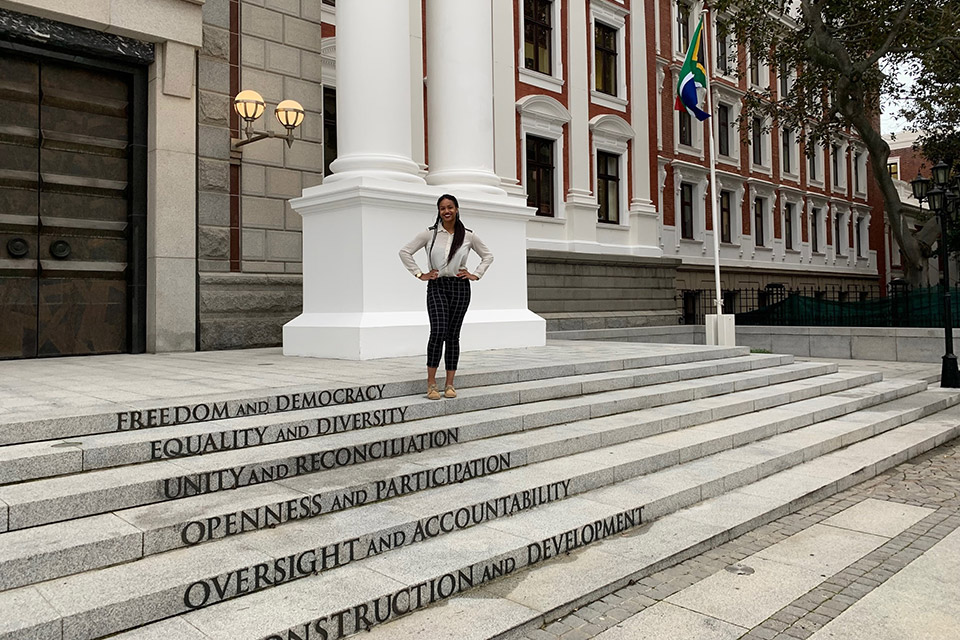 When I first saw Scalabrini, a building with an orange, red, and yellow facade, it looked like a place of hope in a grim area. For refugees, Scalabrini is exactly that — a safe haven. During introductions at my orientation, the facilitator asked us staff to describe our daily commute to the office. People’s responses were a mixture of straightforward and convoluted paths, causing us all to approach our work differently upon arrival. When I began to meet with refugees, I understood just how much our respective paths have shaped us, especially since refugees took even more intense paths to get to South Africa.

This discussion prompted me to consider how, unlike my journey from the United States, others were packed onto boats in conditions reminiscent of the Middle Passage, hidden under covers in trucks and buses, and had walked hundreds to thousands of miles to get to South Africa. Somewhere along the way, the clients learned about Scalabrini and they landed at my desk. There, I would give a variety of responses to convey essentially two possibilities: that the journey they made to South Africa was for naught because they were not recognized as a refugee in terms of the 1951 Refugee Convention, or that they would have to travel for hours to a dysfunctional, homophobic, xenophobic office to apply for asylum.

As an Advocacy intern, it was my job to assist clients with applying for asylum, preparing appeals, representations, and assisting with other legal issues that arose (i.e. hospital xenophobia, school registration, family joining). During my first week at the office, I sat with a colleague to shadow her during the client intake process. From 9 a.m. to 12 p.m., we would individually meet with clients to hear their stories and problems, and offer advice on potential solutions. During the first interview I sat in on, the client stated that he would rather be dead than to continue to walk about with an asylum or refugee permit, because they meant very little in practice. This first client quickly showed me what taxing work I was joining.

Throughout my ten weeks at the Scalabrini Centre, there were many heartbreaking moments. I met with people without refugee claims who literally carried their children in their hands and asked for help but could not be assisted; I had to tell people from Zimbabwe and other countries with economic and other claims that they are not recognized as refugees by the Convention, and that they had to return home. But there were also many uplifting moments: translating for French-speaking clients and seeing a smile on their faces when they realized that they could be heard in their native tongue; assisting clients with Certifications for permanent residency; and playing checkers (and getting beat) by men at a culture celebratory event on World Refugee Day. I coped with work by finding beauty in the struggle and learning more about the clients’ lives outside of being a refugee, as well as hearing stories about their children, and talking with colleagues who had been at Scalabrini for years.

A colleague of mine kept the following quote on their desk: “Helping one person may not change the whole world, but it may change the world for one person.” These words pushed me through times when I felt like I failed refugees because I could not directly or quickly change the problems within the refugee system or within their countries. Johnny Clepp’s song “Asimbonanga” also kept me going by reminding me of how many seemingly insurmountable battles South Africa has overcome, and that the battle for refugees here in South Africa can also be won. I came to South Africa seeking a better understanding of the praxis of international law. Organizations like Scalabrini have shown me the necessity of on the ground work. As I return to the States, I will take with me the faces and resilient stories of many refugees. The country where Madiba stood tall in the face of injustice has taught me a lot of lessons on how to better the long walk to freedom for refugees.