Are the George Floyd Protests Different? — A Commentary by Stephen Carter ’79 Bloomberg.com

An Interdisciplinary Conversation on Gender Rights, Race, and Sports 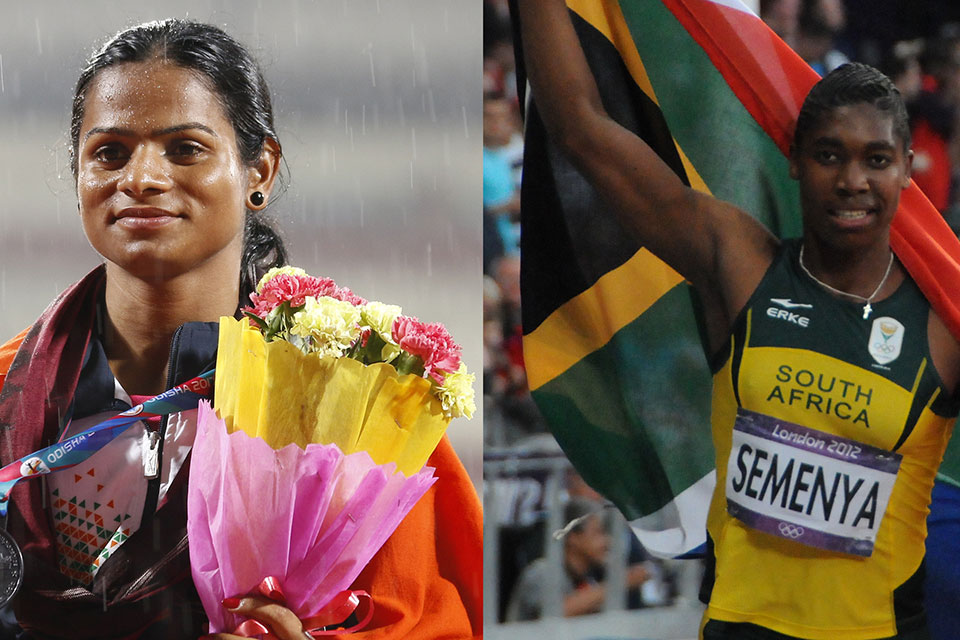 On October 3, 2019, panelists at Yale Law School discussed the implications of gendered and racialized sports eligibility requirements on athletes’ bodily autonomy and rights. The event, titled “Race, gender equality, and sport: When science and law meet [in]justice in the cases of Dutee Chand and Caster Semenya,” was cosponsored by the Global Health Justice Partnership, the Schell Center for International Human Rights, the Gruber Program for Global Justice and Women’s Rights, the OutLaws of YLS, the Yale Law Women of YLS, and the Yale WGSS Council.

The panel focused on recent legal and sociocultural challenges regarding the eligibility regulations for the “female category” in track and field. In 2009, Caster Semenya, a professional athlete and woman of color, underwent scrutiny for her appearance, and the International Association of Athletics Federations (IAAF) subjected her to a sex verification test to prove she was female. In 2015, Dutee Chand, another woman of color, was barred from competing in the sport because of her naturally high testosterone levels. Chand successfully appealed to the Court of Arbitration for Sport (CAS) which then suspended the IAAF policy on hypoandrogenism, or high natural levels of testosterone in women. However, in May 2019, CAS upheld Semenya’s exclusion. Now, she awaits news regarding her appeal at the Swiss Federal Tribunal.

The panelists emphasized that both cases expose the policing of gender in sports. They argued that the sex verification tests, particularly aimed at women of color in track and field, determine who belongs in the “female category,” and ignite a conversation about equality, fairness, bodies, race, and gender.

Associate Professor of Law and Co-Director of the Global Health Justice Partnership Alice Miller set the stage for the discussion. The themes and questions at play, she said, are the questions of rights, gender, and accountability. “Science matters in law,” she said. “Gender and fairness in sport must be examined, as well as how they play together. So many people are involved in this global conversation.”

Karkazis, who served as an expert witness for Chand and a consultant in Semenya’s case, began the conversation by delineating the struggle for gender equity in sports. She emphasized that sex is a persistent problem in sports, a discipline that has been sex-segregated since women’s entry. With sex testing attempts only on women and not men, she noted, it is implied that women are an inherently weaker and more vulnerable “pure and protected category.”

“Sex is not that straightforward,” Karkazis explained. “Where do you draw the line of male and female? Sport relies on biological criteria, but there’s no single criterion that enables the classification of male and female.” From the 1960s-era practice of genital and visual exams to the contemporary use of the hormone testosterone to classify sex, Karkazis outlined a long history of exclusion by the IAAF based on unscientific, mandatory sex testing for all women athletes.

However, because the IAAF does not have the authority to determine an individual’s sex, Karkazis explained, “a route where a legal case could be opened emerged.”  Unable to exclude women athletes based on legal sex, Karkazis said, the IAAF modified their approach. Citing established male and female differences in performance, the IAAF attributed the disparity to differing levels of testosterone in men and women. They argued that women with a high level of natural testosterone, or “T” for short, have an “unfair advantage.” With this justification, the IAAF set a ceiling for the amount of natural testosterone that women can have in order to be admitted into the female category. In doing so, the IAAF was no longer technically “sex-testing.” Instead, they invented an entirely new “athletic sex:” a new category of sex solely for sport, based erroneously on T, where women with naturally high T can be banned unless they are able to artificially lower their levels of the hormone.

Attorneys Bunting and Sayao followed Karkazis’ presentation with a discussion of the particularities of Chand and Semenya’s exclusion. They began by showing a picture of Semenya at eighteen, right after she won the 800-meter race at the 2009 IAAF World Championship — only to be met with a sex verification test after her gold-medal finish. Bunting reported that even Pierre Weiss, former General Secretary of the IAAF, questioned Semenya’s sex: “It is clear that she is a woman,” he said, “but maybe not 100 percent.”

Chand and Semenya’s exclusion, Bunting and Sayao said, was based on degrading tests by an expert panel who examined breast size, depth of voice, and even body hair to determine whether athletes exceeded the ceiling of natural testosterone for women, 10 nmol/L. If an “unfair advantage” was identified, women faced two options — to quit the sport they loved or undergo medical intervention to reduce and maintain their T level below 10 nmol/L.

For Chand, whose sex was debated at the international level and who was called an “embarrassment” to India, Bunting and Sayao were able to achieve legal success. In a landmark case in July 2015, the CAS declared that the IAAF had discriminated against Chand and failed to establish the eligibility regulation that excluded her as “necessary, reasonable, and proportionate” to creating a “level playing field.” The court also found that there was insufficient evidence to support the degree of advantage that testosterone provided or whether or not this advantage was unfair in the first place, given that it is a natural genetic trait. Thus, the CAS suspended the regulation for two years and Chand was able to compete in 2016. But in 2018, Bunting and Sayao said, the IAAF introduced a new, similarly exclusive regulation with an even lower testosterone ceiling of 5 nmol/L, undoing Chand’s legal triumph.

Semenya was barred from competing by this regulation that required athletes with specific disorders of sex development such as chromosome abnormalities or testosterone levels of 5nmol/L and above to take oral medication in order to lower their testosterone levels and avoid disqualification. In 2018, CAS rejected her legal challenge to the IAAF rules. According to Bunting and Sayao, the athlete cites her desire to run naturally, “the way she was born,” as a motivation for challenging the eligibility rules. They added that her thoughts echo those of other women facing the same obstacles.

In Semenya’s case, Bunting and Sayao said, they argued that the regulations were discriminatory and that the chromosomal abnormality that Semenya and others have is no different than other genetic variations, confers no significant advantage that threatens fair competition, and does not mean women with the chromosomal variation are biological males. They also argued that the regulations cause substantial harm as violations of bodily integrity and privacy.

The CAS decision dismissed Semenya’s challenges regarding the validity of the IAAF’s Eligibility Regulations for Female Classification, and she has appealed the decision. “The time is now,” Bunting said, “to get rid of these rules formally.”

In an interview with the Schell Center, Bunting explained the stakes of Chand and Semenya’s cases: “Broadly, the right not to be discriminated against based on a natural or genetic trait [is at stake] and [the regulations] violate what we call in Canada the security of the person, so someone’s right to have their body securely within their own right and not have it violated or intruded upon unnecessarily.”

Dr. Yetsa Tuakli-Wosornu provided a unique set of lenses as a doctor who cares about her patients and also sees herself as “first and foremost an athlete.” She explained that it is common for athletes to have chromosomal variations like Semenya’s. To her, “science is more art than science.” The body, she said, is not as straightforward as science often makes it seem. While we may be drawn to the binary of male and female to explain life, she said there is “a lot of variance in the womb [and beyond].”

Tuakli-Wosornu also highlighted the significance of race, which she called “the elephant in the room.” She noted “who we are scrutinizing the most in these conversations,” referring to the heightened risk for women of color of being challenged about their sex.

In her closing remarks, Tuakli-Wosornu reiterated the stakes for the athletes targeted by organizations like the IAAF: “People’s autonomy is under threat by larger entities.”