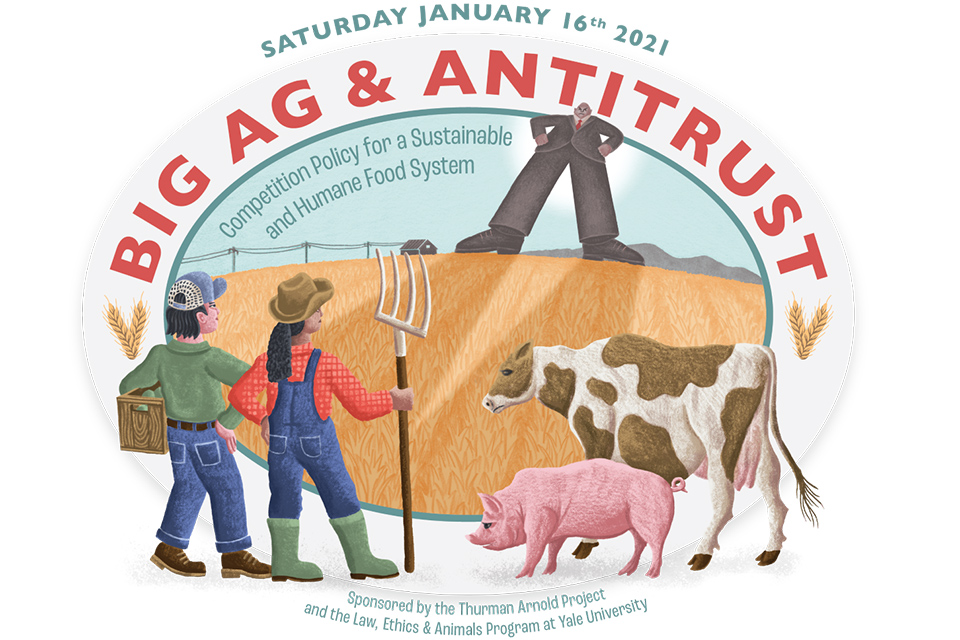 On Saturday, January 16, hundreds of academics, policymakers, lawyers, farmers, journalists, advocates, and students participated in the Big-Ag & Antitrust Conference, a daylong virtual event dedicated to addressing how competition law and policy can combat corporate concentration in America’s food system. The conference was cohosted by the Law, Ethics & Animals Program (LEAP) at Yale Law School and the Thurman Arnold Project (TAP) at the Yale School of Management, and cochaired by Yale Law School students Manny Rutinel ’22, Melody Wang ’21, and Alexander Weiss ’22.

In his opening remarks, TAP Deputy Director Austin Frerick offered a sobering assessment of the current state of America’s farm and food sectors, which have come to be controlled by a small number of enormous firms, leading to disastrous consequences for farmers, workers, animals, consumers, and the environment. “The path we’re currently on offers a grim future,” Frerick said. “It would be a mistake to think we’ve hit rock bottom, or that market forces or the choices of consumers will somehow lead to a change in course. Without structural change, all of the trends we’ve seen take hold will only intensify.”

Frerick then introduced the day’s keynote speaker, investigative journalist and author Christopher Leonard, who spoke about his reporting on the meat industry and his 2014 book, The Meat Racket: The Secret Takeover of America’s Food Business. An investigation of the rise of Tyson Foods, Leonard’s book charts how Tyson aggressively pursued its vertically integrated business model to such a degree that, in Leonard’s words, it is “no longer subject to the forces of supply and demand in a significant way.” Leonard was quick to point out that the meat industry’s abuses of its monopolistic power have only worsened in the six years since the publishing of his book, in no small part, he argued, due to the failures of the Obama administration’s efforts to inaugurate a new era of antitrust enforcement, which emboldened the industry to act with impunity.

Fortunately, Leonard said, the tides seem to be changing in favor of a long-needed movement to restore competition in America’s food system. “We are at a very ripe and unique moment in regards to these issues,” he said. “There is a moment of energy, attention, and momentum around antitrust reform that we have not seen in America since the late 1930s.” Boycotting individual food producers like Tyson will do little to solve the problem, according to Leonard. “For people trying to make a living in rural America, for people trying to manage life today on a limited bill for groceries, who depend on this food as a cheap source of protein, reform is needed to restore competition to this marketplace,” he said.

Following Leonard’s address was a series of six hour-long panels focusing on an aspect or theme related to the food system — “Meat & Dairy,” “Farmers & Workers,” “Systems,” “Animal Welfare,” “Intellectual Property,” and “Reforms” — with each panel featuring three papers, followed by a lively Q&A. The 18 original papers offered legal, political, historical, sociological, and economic insights into our modern food system while forging connections between competition policy and broader concerns associated with the American food system, including animal welfare, workers’ rights, climate change, public health, and more. One-third of the papers were authored by students.

“The papers presented are full of valuable insights and practical ideas for how competition law and policy can help build a better food system,” said Viveca Morris, Executive Director of the Law, Ethics & Animals Program. “The conference was particularly powerful because it brought together a really diverse group of presenters and audience members. It’s not every day that you have farmers, ranchers, animal welfare advocates, antitrust scholars, and more working together to better diagnose and address a common concern.”

After the final Q&A of the conference, TAP Director Professor Fiona Scott Morton expressed her hope that the conference might generate momentum for further interdisciplinary efforts to address the many problems discussed throughout the day. “We want to harness the ideas and the community that we developed today to achieve more scholarship and policy progress going forward,” she said. “We want to start a community that can keep pushing on this policy front.”

“Things couldn't have gone better,” said Frerick, reflecting on the day’s events. “The interest way exceeded our expectations with nearly a thousand registrations. This tells me that there is clearly momentum and a desire to reform these broken markets.” He added, “Chris Leonard also gave one of the best keynotes I’ve ever seen—so focused, so passionate, and so well executed.”

Videos of the keynote address and the six panels are available online (Q&A portions were not recorded). The conference guide, with presenter bios and presentation abstracts, can be accessed online.