The Law, Ethics & Animals Program (LEAP) at Yale Law School has announced this spring’s speaker series. Last semester’s guests showcased how science, journalism, activism, and other fields contribute to the animal protection movement. This spring, the program is homing in on a topic close to LEAP's core mission: how the legal system fails animals, and how it can be made better. The series will tackle major questions about how the law and legal institutions interact with animals, the history of animal law, and what change can look like in the short, medium, and long terms. LEAP thanks the Brooks Animal Studies Academic Network for their support of the speaker series.

The series kicks off on Thursday, Feb. 3, 2022, with a look at animal representation in legal systems, featuring University of Victoria’s Maneesha Deckha. The other events this spring will explore such topics as the complicated nature of sentience in moral philosophy, how unwritten constitutional law fails animals and marginalized humans alike, and how international legal systems could be leveraged to implement animal protection. You can read more about all of our events (and register for them) below.

Register for the webinar: tinyurl.com/leap-deckha 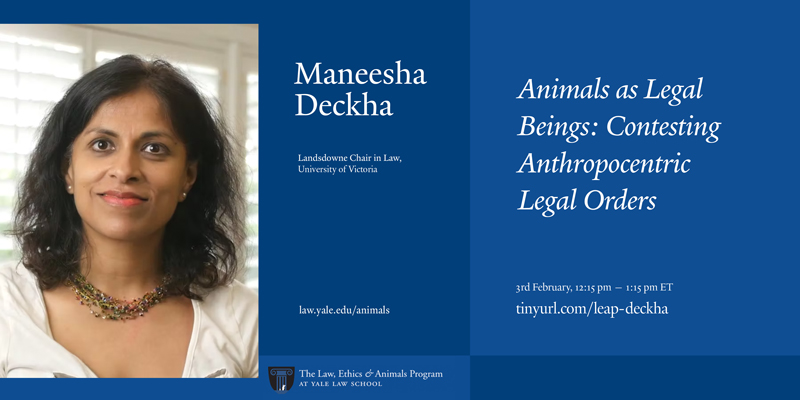 The dominant legal systems in America and Canada treat animals as property, a designation that fails to account for their subjectivity, autonomy, and capacity for suffering. But promoting them to legal personhood, some advocates suggest, would create problems of its own because the category is a human-tailored one that requires animals to behave, think, and be in ways that they cannot. Maneesha Deckha, author of Animals as Legal Beings: Contesting Anthropocentric Legal Orders, proposes a solution: grant animals a new legal status, “beingness,” that exists outside of the persons-property dichotomy. In this talk and Q&A, moderated by LEAP Faculty Co-Director Doug Kysar, Professor Deckha will explore her work on beingness and other representations of animals in the legal system.

Maneesha Deckha is the Lansdowne Chair in Law at the University of Victoria Faculty of Law, where she directs the Animals and Society Research Initiative. She works at the crossroads of animal, feminist, and postcolonial legal studies.

Sentience is More Complicated Than You Think, with Dale Jamieson

Register for the webinar: tinyurl.com/leap-jamieson 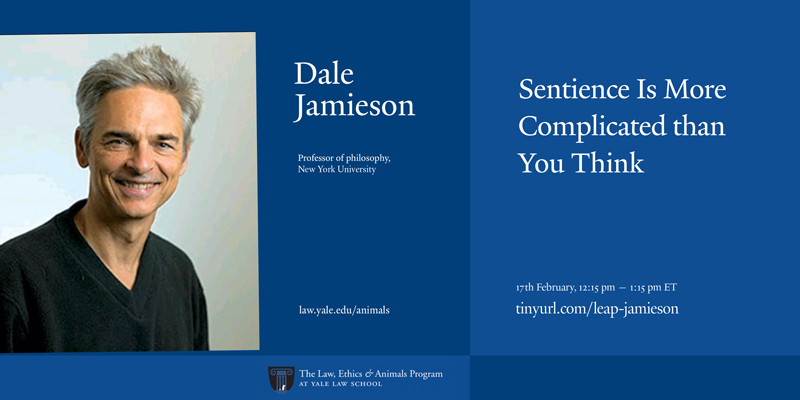 One very powerful narrative in the animal protection movement goes like this: In the grip of bad philosophy, people in the West used to think that sentience is a necessary but not sufficient condition for moral standing, and that all and only humans are sentient. Bentham showed us that sentience is sufficient for moral standing and Darwin showed us that many non-humans are sentient as well. Now all we need is science to tell us which beings are sentient and activism and law to put animal protection into practice. The Owl of Minerva (i.e., the philosophers) can go back to sleep. But not so fast. Sentience is a scientifically informed, but highly interpretative concept, in need of philosophical reflection. Moreover, a single-minded concern with sentience obscures other morally relevant features, such as agency, which matter profoundly for how we should treat those who exemplify them.

Dale Jamieson is Professor of Environmental Studies and Philosophy; Affiliated Professor of Law; Affiliated Professor of Medical Ethics; Associated Faculty, Center for Bioethics; and Founding Director of the Center for Environmental and Animal Protection, at New York University.  In 2016 he was awarded the Association of Environmental Studies and Sciences William R. Freudenburg Lifetime Achievement Award.  He has been thinking seriously about animals since the early 1970s when his dissertation supervisor, Paul Ziff, made him read Konrad Lorenz and Niko Tinbergen in order to write a dissertation in philosophy of language, since “human linguistic behavior is just a branch of animal behavior;” and he met Tom Regan who had written, but not yet published, his first paper on animals, “The Moral Basis of Vegetarianism.”  He has been thinking about science and why it matters even longer.

Animals and the Unwritten Constitution, with Jessica Eisen

Register for the webinar link: tinyurl.com/leap-eisen 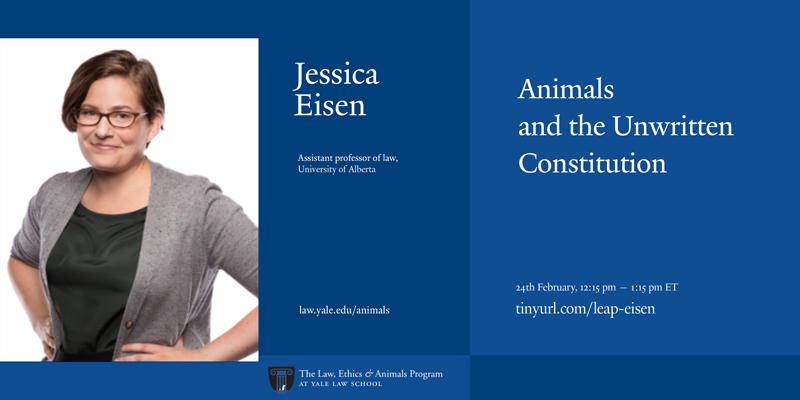 Jessica Eisen is an assistant professor of law at the University of Alberta. Her research interests include animals and the law, constitutional and comparative constitutional law, equality and antidiscrimination law, feminist legal theory, intergenerational justice, and law and social movements. She is the author of “Feminist Jurisprudence for Farmed Animals” in the Canadian Journal of Comparative and Contemporary Law, “Milked: Nature, Necessity, and American Law” in the Berkeley Journal of Gender, Law, & Justice and “Animals in the Constitutional State” in I.CON: The International Journal of Constitutional Law.

Register for the webinar link: tinyurl.com/leap-fernandez 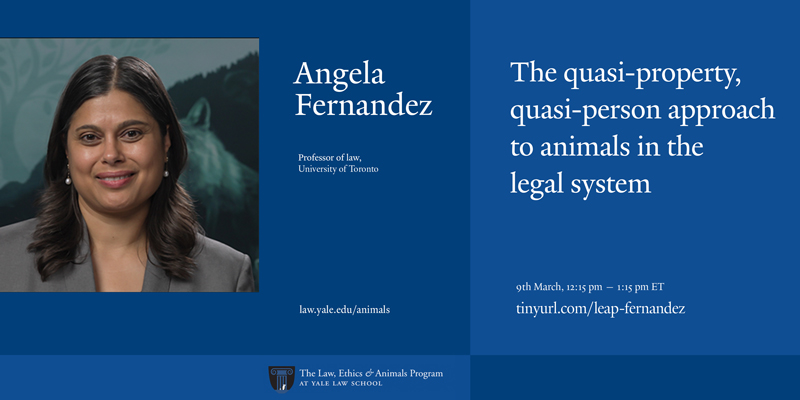 Animals are legal property, but their advocates have spent years pursuing a reclassification as legal persons. This program continues to face challenges: arguments for legal personhood in common-law systems can sound like arguments for actual personhood, and the strategy can go haywire when it is exported from common-law jurisdictions to civil-law jurisdictions. Moreover, victory for this theory would likely give legal personhood to certain intelligent mammals, like chimps, but reinforce the property status of other animals who nevertheless suffer and differ considerably from property like sofas or laptops. What is needed is an alternative to the person-property binary. LEAP is excited to welcome Angela Fernandez for a talk on her quasi-person, quasi-property approach to these questions, moderated by Saylor Soinski ’23.

Angela Fernandez is a professor of law at the University of Toronto, with a cross-appointment in the Department of History. She is the author of Pierson v. Post, the Hunt for the Fox: Law and Professionalization in American Legal Culture. She sits on the Board of Advisors and is a Director of Animal Justice Canada.

Register for the webinar link: tinyurl.com/leap-animal-crisis 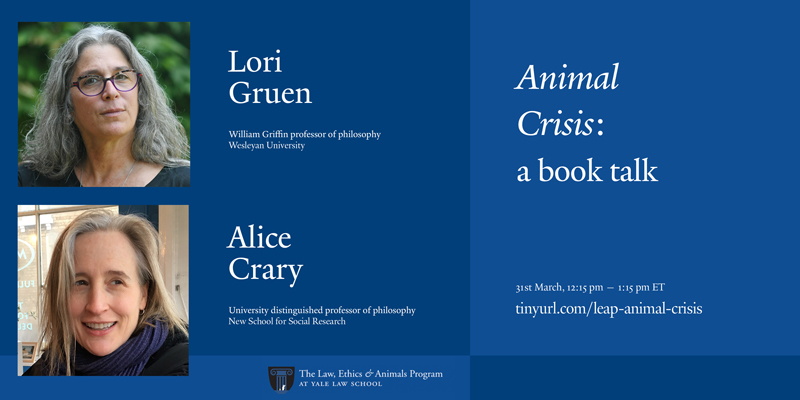 The issues of the day make it clear: the attitudes that authorize human abuses of nonhuman animals harm us all. From global pandemics and mass extinctions to habitat destruction and catastrophic climate change, humans and non-humans face a complex set of intertwined problems. But animal ethics as it is usually discussed doesn’t avail itself of important insights for addressing exploitation and oppression because it remains largely separate from critical theories, such as ecofeminism. In their upcoming book, Animal Crisis, professors Alice Crary and Lori Gruen investigate “the complex social and political contexts in which animals are harmed, revealing the connections between our callous and cruel attitudes to the animal world and those same attitudes towards vulnerable human groups.” In this talk, moderated by Emma LeBlanc ’24, Crary and Gruen will lay out their novel approach to the argument that “there can be no animal  liberation without human emancipation.”

Lori Gruen is the William Griffin Professor of Philosophy and Professor of Feminist, Gender, and Sexuality Studies and Science in Society at Wesleyan University. She coordinates Wesleyan Animal Studies and is the author of numerous books, including Ethics and Animals, Ecofeminism, and Entangled Empathy.

Alice Crary is a University Distinguished Professor of Philosophy at the New School for Social Research. Her research areas included moral philosophy, critical theory, and critical animal studies, and her published works include Beyond Moral Judgement and Inside Ethics: On the Demands of Moral Thought.

Convention on Animal Protection: A Global Treaty for Animal Welfare, Public Health, and the Environment

Register here for the webinar: tinyurl.com/leap-cap 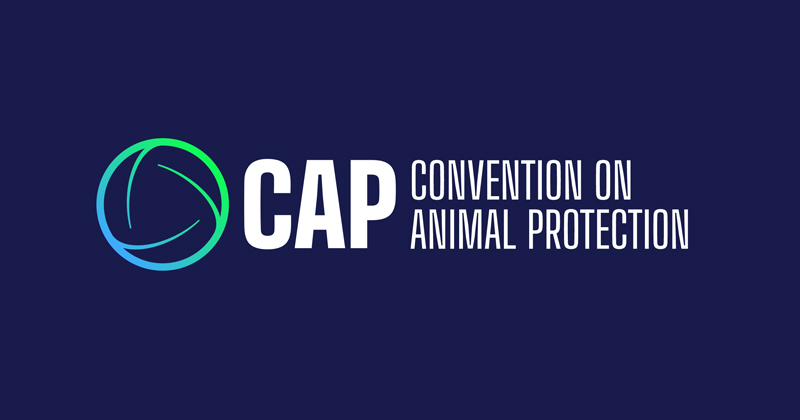 In February 2021, seeking to address a critical gap in the current framework of international agreements, the American Bar Association (ABA) called for a Convention on Animal Protection to protect public health, the environment, and animal well-being. Building on the ABA resolution, a group of international lawyers and law professors are working to make the treaty a reality and to establish international safeguards and standards for our interactions with animals. Join LEAP for a panel with the members of the ABA International Animal Law Committee who obtained the passage of the ABA resolution on the proposed draft treaty, including the treaty’s potential to prevent pathogenic spillover and future pandemics. Learn more about the treaty at conventiononanimalprotection.org.

David Favre is a professor of law at Michigan State University College. He served as Dean of the College for five years and continues to teach in the area of property law, animal law, and international environmental law. Professor Favre has written a number of articles and books dealing with animal issues including such topics as animal cruelty, wildlife law, animal rights, ethics of animal use, and international control of animal trade.

Rajesh K. Reddy directs the Global Animal Law and Animal Law Advanced Degree Programs at the Center for Animal Law Studies at Lewis & Clark Law School. He chairs the International Subcommittee of the Animal Law Section of the American Bar Association and serves as a board member for Minding Animals International. He has advanced human and nonhuman animal interests as part of his work for the Animal Legal Defense Fund and the Human Rights Law Network in New Delhi, India.

Joan Schaffner is a professor of law at George Washington Law School, where ze directs the GW Law Animal Welfare Pro Bono Project. Ze has presented on animal law panels and conferences world-wide and is the author of the book Introduction to Animals and the Law and of several book chapters, including “Valuing Nature in Environmental Law: Lessons for Animal Law and the Valuation of Animals” in What Can Animal Law Learn from Environmental Law? and “Value, wild animals and law” in Animal Welfare and International Environmental Law: From Conservation to Compassion.