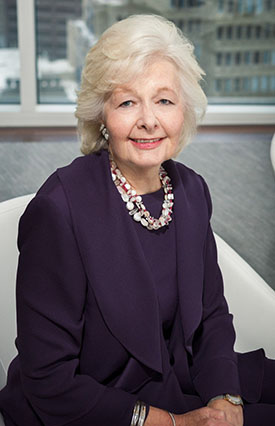 Margaret H. Marshall ’76 has always been an advocate for justice at heart. But she never thought she would be a lawyer.

Marshall grew up in South Africa during the apartheid era, a regime marked by extreme oppression of the black majority by the white minority, with arrests, banishment orders, imprisonment without trial, and assassinations by the apartheid government targeting its political opponents. As a student in the mid-1960s, she became deeply involved in activities against apartheid. The most internationally known episode from this period was Nelson Mandela’s arrest in 1962 and subsequent sentence to life in prison. Four years later, as Vice President of the National Union of South African Students (NUSAS), Marshall accompanied Robert F. Kennedy on his 1966 visit to South Africa. She was with him in Cape Town when he delivered his now world-famous remarks, which deeply influenced her: “Each time a man stands up for an ideal, or acts to improve the lot of others, or strikes out against injustice, he sends forth a tiny ripple of hope, and crossing each other from a million different centers of energy and daring, those ripples build a current which can sweep down the mightiest walls of oppression and resistance.”

The political opposition to injustice with which Marshall became familiar was grassroots organizing, demonstrating in the streets, boycotts and similar actions. “In South Africa, law was an instrument of oppression,” she said. “The law — with compliant judges to enforce the apartheid laws — was used over and over again to dehumanize the majority, Black South Africans, whether forcibly moving millions from their homes to make way for Whites, or forcing every Black person to carry an identity document with them at all times, on pain of immediate arrest. Not surprisingly, I developed a deep suspicion for law and its role in society.”

Marshall surmises that her race — coming from a white, non-political family — helped shield her from the worst from the South African police, but being a white woman made a bigger difference. “My gender protected me more — at least at that moment in South Africa’s history,” she said. “It kept me from banishment and kept me out of prison. The warrants issued for my arrest were not executed as they were against my white male colleagues and all my black colleagues.” Marshall pressed on, becoming the national President of NUSAS. Faced with the overwhelming military, financial, and political power of the apartheid government, Marshall said, “I had no confidence that anything I was doing would make a difference, but I had to try.”

As the situation worsened in her home country, Marshall received a scholarship to study for a Ph.D. at Harvard University in art history. “With no mentors or guidance, it did not take me long to feel that being a scholar of art history was not for me,” she explained. She transferred to Harvard’s Graduate School of Education and earned her Ed.M., an experience she deeply valued. She began to study for a doctorate in education, yet she knew she had not found her calling.

One evening, while still a graduate student in education, Marshall was dining with friends in Cambridge, one of whom was a student at Harvard Law School. “Why don’t you go to law school?” she asked Marshall. Still in search of a fulfilling vocation, Marshall decided to sit for the LSAT.

Marshall applied to four law schools that winter — three in Boston, and one in New Haven. (“Yale is the best law school in the United States,” she was told.) In April, Marshall had not heard from any of the law schools to which she had applied: an administrative error at Educational Testing Service meant that her LSAT score had not been sent to any law school. Marshall herself had been notified of her LSAT test score, so she walked to Harvard Law School’s admissions office to correct the error. HLS, she was told, would not accept her word for her LSAT score, only the score sent directly from ETS.

Marshall then called Yale Law School. She was a graduate student at Harvard and lived in Cambridge, yet ultimately, she chose Yale because of one person. To this day, she remembers the response of YLS’s Associate Dean of Admissions Jim Thomas ’64: “We thought yours was an interesting application. What was your LSAT score?” he asked. Presumably, he knew that confirmation would come from ETS. With that empathetic and trusting response, Marshall chose Yale. She still warms at the recollection of how a significant life decision can be made because of one person.

Marshall studied with “wonderful professors” at YLS. “I learned at Yale that a constitutional democracy, as ours is, with a bill of rights enforced by independent judges can be a profound force for good in society. This was a far cry from my South African experience,” she said, “and made me appreciate the greatness of our American system of government.”

After graduating in 1976, Marshall started her career in private practice in Boston, becoming a partner at Choate, Hall & Stewart. She then served as Harvard University’s General Counsel before she was appointed to the Massachusetts Supreme Judicial Court in 1996. Three years later she became Chief Justice, the first woman to hold that position in the court’s then-304-year history.

Marshall counts Yale Law School as the watershed moment in her life. “Yale opened a whole new world for me,” she said. “There is a before Yale Law School and an after Yale Law School to my life.” Marshall speculates that at a time when many doors remained shut to women, her Yale Law School degree helped opened some that might have remained closed. “It helped me when I was in private practice. It helped me when I was appointed General Counsel of Harvard. It helped me it when I was being considered for appointment to the Massachusetts Supreme Judicial Court. My Yale Law degree meant that I received serious consideration, when I might not have been given any consideration at all,” she said. Even today she goes out of her way to show her Yale pride. “I was the first woman appointed Chief Justice of the Supreme Judicial Court,” Marshall explained. “And I was also the first graduate of Yale Law School to sit on that centuries-old Court. I don’t know which is more astounding.”

During her tenure as Chief Justice, Marshall is perhaps best known for writing the majority opinion in Goodridge v. Department of Public Health, the landmark case that in 2003 made Massachusetts the first state to recognize same-sex marriage. Although she is known to understate her own impact with this case, Marshall’s decision changed history, as witnessed by the sea change that followed Goodridge.

Marshall began giving back to Yale Law School early on, both financially and as a volunteer. She helped to revive YLS’s Boston-area alumni group, served on the Yale Law School Association Executive Committee, accepted invitations to speak at countless events at Yale, mentored law students and law clerks, and served as a Fellow of the Yale Corporation (now called the Board of Trustees) beginning in 2004 and ending in 2016, her final three years as Senior Trustee. “Because of my many years working in the nonprofit and public sector, I cannot be as huge a financial donor to my beloved law school as some,” she says. “But for almost 50 years, I have tried to do whatever I could to give back to this law school that so changed my life.”

Marshall counts her time serving on the Yale Board of Trustees as a deeply rewarding experience. “To serve one of the great institutions of higher education at the highest level is an enormous responsibility: I hoped to make sure that at the end of my term I had helped to make the University a little better and certainly no worse. My term as Chief Justice aside, I do not think I have ever worked as hard for any institution as I did for Yale. It was a privilege to be selected, as it was to serve with trustee colleagues who thought deeply and carefully about the future of Yale in a rapidly changing society, and about the many contemporary issues that arose.”

Her advice for young activists of today? “Take the long view of history,” said Marshall, as she reflected on her own past. Despite the enormous power of the apartheid government, which, Marshall remembered, “seemed like a huge granite wall in front of us, with not a chink in sight,” South Africa’s anti-apartheid organizations were able to accomplish what once seemed almost beyond reach: the release of Nelson Mandela and all political prisoners, the unbanning of political opposition parties, the dismantlement of the apartheid laws, and the country’s first free elections in 1994, with a new democratic constitution. It was several decades from her anti-apartheid activities as a student in the 1960s, but change came.

When she looks at her judicial work, she reflects on similar patterns. “The decision I wrote in Goodridge in 2003 recognizing same sex marriage in Massachusetts,” she said, “came some 40 years after the same issue was rejected as ‘nonjusticiable’ by the United States Supreme Court. In the intervening decades, many kept advocating for change, contributing in so many different ways to the fight for equal rights.”

The core message Marshall shares with younger generations is one of hope. “The world will be what you make of it — if you do not give up. You cannot expect every wrong, every injustice, to be solved overnight. You must do what you can today. Every action of yours today will make a difference in the long run, but only if today you take the next step for justice, however small it seems.” 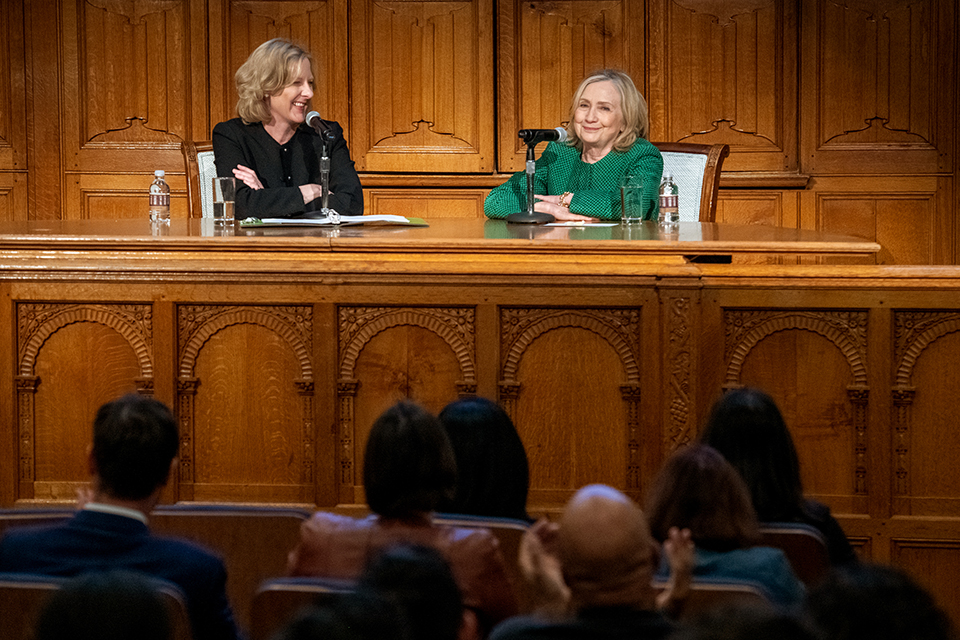 Dean Heather K. Gerken and former Secretary of State Hillary Rodham Clinton ’73 held a conversation in which Clinton described her career path and how she defines leadership. 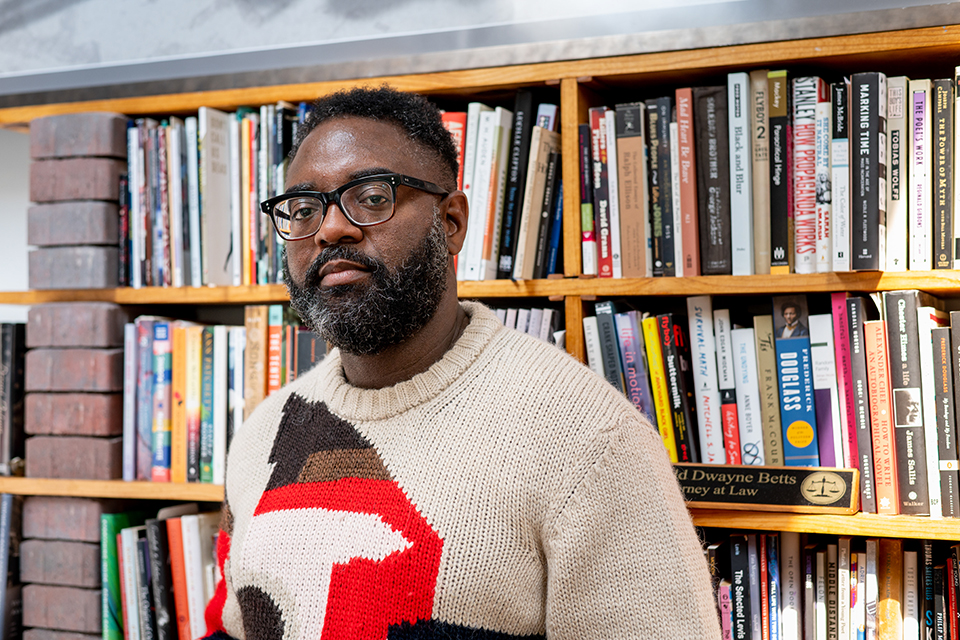