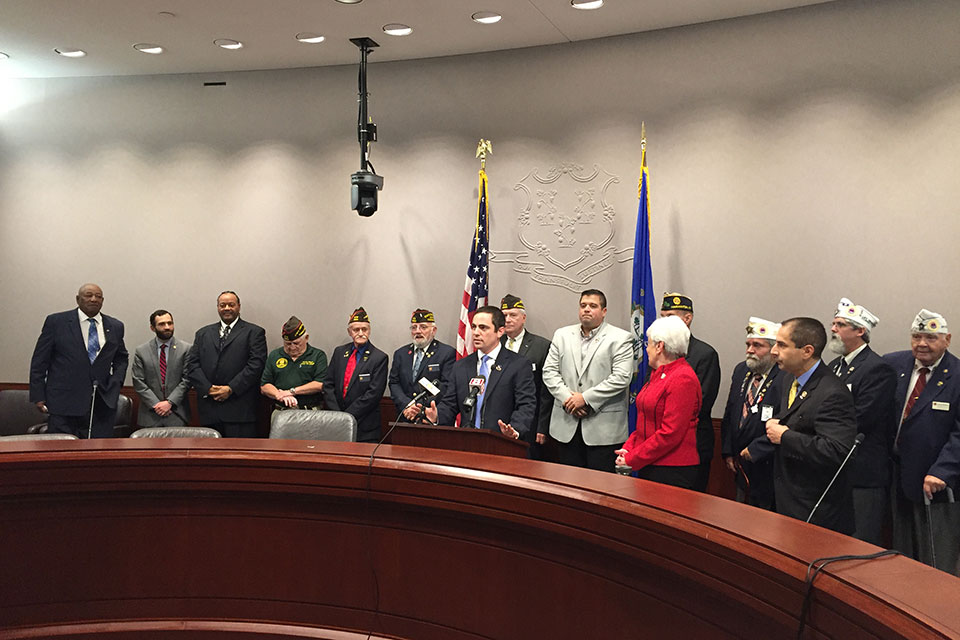 On October 4, 2018, the Connecticut Department of Veterans Affairs (DVA) announced a new law extending a broad range of state and municipal benefits to veterans who received an Other than Honorable (OTH) discharge characterization as a result of Post-Traumatic Stress Disorder (PTSD), Traumatic Brain Injury (TBI) or a victim of Military Sexual Trauma (MST).

In February, the Connecticut Chapter of Iraq and Afghanistan Veterans of America (IAVA-CT) released a report detailing the need for such legislation and presented a bill to the CT General Assembly’s Committee on Veterans’ Affairs.

Governor Dannel Malloy signed Senate Bill 284 into law on May 31, 2018, making Connecticut the first state to open its benefits to less-than-honorably discharged veterans with trauma. A report released by IAVA-CT and the clinic estimated that approximately 800 Connecticut veterans would benefit from the bill.

DVA Commissioner Thomas J. Saadi joined Lieutenant Governor Nancy Wyman, Iraq Afghanistan Veterans of America, veterans advocates, legislators, and students from the VLSC in Hartford to announce the details of the new law, which went into effect on October 1, 2018.

“This law, the first of its kind in the nation, demonstrates Connecticut’s commitment to our veterans. It is my hope that this law will serve a model for other states to follow in addressing the needs of those men and women who otherwise served our nation honorably but suffered the visible or invisible wounds of war or were victims of sexual violence which were the contributing factors in their receiving an Other than Honorable discharge,” Saadi said.

Sam Frizell ’20 of the VLSC said, “Our clients are some of the most marginalized individuals within our communities. They have often struggled with homelessness, unaddressed mental health or substance abuse issues, or the trauma stemming from an experience of sexual assault. We’re proud that Connecticut will no longer deny vital, life-saving benefits to these veterans. We hope this legislation serves as a model to the nation, and we urge the federal government and other states to take up the cause.”

“This is a monumental change in how we treat bad paper discharges and mental health in general,” said Steve Kennedy, Connecticut team leader for Iraq and Afghanistan Veterans of America. “This bill acknowledges not only the impact of service-related mental health conditions on discharge characterizations, but also the need for transition assistance beyond mental health treatment to fully recover. If you have PTSD, a traumatic brain injury, or experienced military sexual trauma, you can now receive education, employment, and housing assistance to allow you to rebuild your life and reintegrate into the community. This is huge, and I am so proud of our state for leading the way on the proper treatment of these struggling veterans.”

The chair of the Veterans Affairs Committee, Representative Jack Hennessy said, “I am pleased to have played a part in passing meaningful legislation that helps those with bad paper discharges to access the crucial services provided by the state in order to ease their transition into the civilian world.”

The Veterans Legal Services Clinic was founded in 2010 to train law students and to serve the legal needs of veterans. Under the supervision of clinical professors, clinic students engage in litigation before administrative agencies and courts on a range of matters.

Director of Legal Research and Writing Cecilia A. Silver teaches a class of Introduction to Legal Analysis and Writing, a course that all new J.D. students take in their first seven weeks of Yale Law School.