Are the George Floyd Protests Different? — A Commentary by Stephen Carter ’79 Bloomberg.com 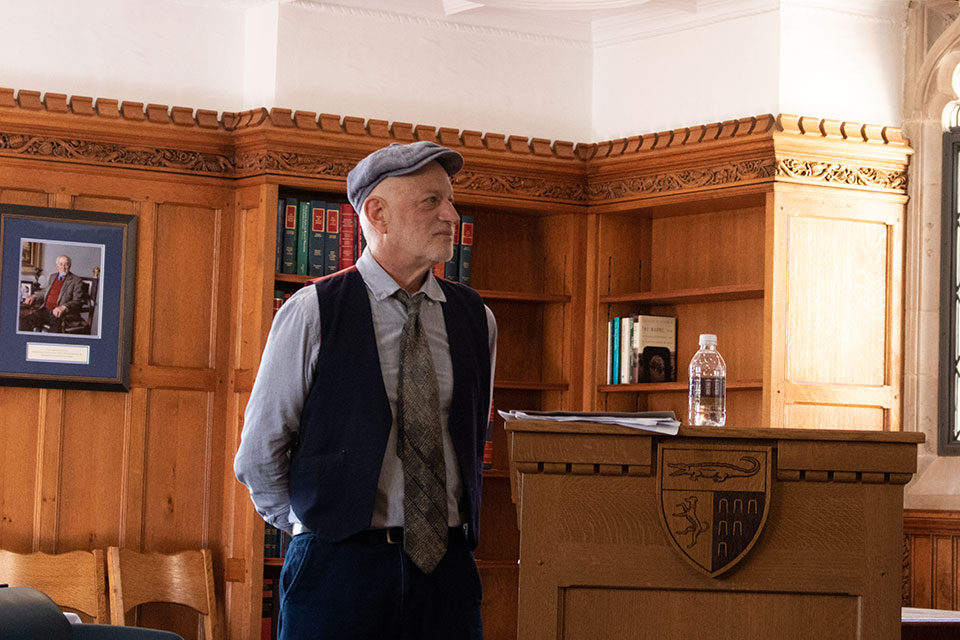 Honigsberg has spent the past decade documenting stories of the detention camp Guantánamo Bay.

Peter Jan Honigsberg led the February 27, 2020 Human Rights Workshop on his efforts to gather historical accounts of Guantánamo Bay from the detention camp’s detainees, guards, interrogators, chaplains, military and civilian lawyers, medical personnel, high-ranking military and government officials, family members of the detainees, and interpreters. Honigsberg, a Professor of Law at the University of San Francisco and the founder and director of Witness to Guantánamo, has spent the past decade crafting a historical documentary based on the testimony of actors at Guantánamo in addition to his numerous publications on the subject of Guantánamo, the “War on Terror,” national security, and human rights.

Honigsberg described the empty promises different politicians have made to close Guantánamo should they be elected. He pointed specifically to the 2008 presidential election when both President Barack Obama and John McCain committed to closing Guantánamo, a promise President Obama did not fulfill during his presidency. In 2008, according to Honigsberg, there had been an absence of firsthand accounts from people who lived or worked in the prison. In addition, although many people in the early years following the terror attacks on September 11, 2001, knew of the links between 9/11 and Guantanamo, today many people are not aware of the connection. To most people, Guantánamo is a “distant thought,” Honigsberg said, “yet it was a critical period in American history” and one of the “darkest periods of American law.”

In light of this absence of information, Honigsberg felt a need to document the abuses experienced at Guantánamo while it is still active. After securing funds, Honigsberg filmed 158 interviews with former detainees and other people connected to Guantánamo. He described how, in response to a growing fear that people were “denying the Holocaust happened,” director Steven Spielberg founded the University of Southern California’s Shoah Foundation Institute for Visual History and Education in 1994 to record and preserve interviews with Holocaust survivors and other witnesses. One such survivor was Honigsberg’s father. Having been present at his father’s interview, Honigsberg wanted to replicate Spielberg’s methodology to document Guantánamo.

One of Honigsberg’s interviewees was Moazzam Begg. The U.S. originally gained custody of Begg by paying a bounty to his foreign captors and thereafter kept him in isolation for nearly two years in Guantánamo. In the video clip Honigsberg presented, Begg told his story of psychological torture, emphasizing that his “faith was severely tested.” Begg was only released, according to Honigsberg, because he was a U.K. citizen and, at the time, President George W. Bush wanted Great Britain’s support in Iraq.

Honigsberg explained that Vice President Dick Cheney “wanted to prove that [America] was tough” by ensuring the capture of “terrorists” worldwide. However, Begg, like many of the people in Guantánamo, was unlikely a terrorist. The U.S. released him, and nearly all of the other 780 men in the prison, without ever charging them with a crime. Forty men remain in the prison today.

Twenty-two of the prisoners in Guantánamo were Uyghurs, a minority group from what is now the Chinese Xinjiang province, after escaping to Afghanistan to flee persecution in China. In Afghanistan, a few months after the September 11 attacks, the Uyghurs were captured and sold to the United States Military by Afghan and Pakistani soldiers, according to Honigsberg. He described how those captured, some merely sixteen years old, were “thrilled” to see their captors were American, believing the U.S. knew the “real enemy” was China. To their horror, they were “essentially powerless” and held in Guantánamo for years, and some for more than a decade without charges.

Another person Honigsberg interviewed was Damien M. Corsetti, a young man who joined the military prior to 9/11 and later became an interrogator at Bagram Air Force Base in Afghanistan . Known for his brutal interrogation tactics, Private Corsetti was dubbed the “King of Torture” by the leader of his military unit. While at the detention camp, he became concerned that the abusive techniques he was instructed to use violated the law. Nonetheless, Honigsberg said, military lawyers “assured him that it was appropriate.”

In addition to physical torture, detainees described Guantánamo as a “psychological torture prison.” Honigsberg said that while difficult to compare, he considers solitary confinement and other forms of psychological torture to be worse than physical torture, such as waterboarding. Detainees’ “linguistic isolation” hampered their ability to cope with the harsh conditions, as many had no way to communicate with detainees who spoke different languages. While some detainees were able to learn other detainees’ language, many were not able to do so nor could they access anyone who spoke theirs.

Honigsberg also interviewed Jennifer Bryson GSAS ’00, the first female Chief Interrogator. Bryson interrogated the “20th Hijacker,” an alleged terrorist who was accused of aiding in the preparation of the 9/11 attacks, but did not participate. Bryson believed in using “rapport-building interrogation,” according to Honigsberg.

In a clip from Honigsberg’s interview with Bryson, the interrogator said that she and her co-workers wished that there had been a “program on de and counter radicalization.” She was concerned that once the detainees returned home, they would seek revenge on the United States. She also expressed a desire to “channel [detainees’] human capacity into positive things.” Honigsberg explained that Bryson often acted as the detainee’s “sister, aunt, mother, or daughter” and served them tea in order to form a human bond with them.

Honigsberg also recounted his interview with a Guantánamo prison guard, now a police officer in Houston, Texas. The former prison guard found the detainees he once supervised on Facebook and built relationships with them, exchanging photos of their families and sending messages.

The last clip Honigsberg played was from 2011. It showed U.S. Colonel Lawrence Wilkerson, former Chief of Staff to Secretary of State General Colin Powell, urging the U.S. government to “bring [the Guantánamo detainees] here” and try them fairly. Wilkerson attributed what he called the “lack of courage” to “politics of fear and bad leadership.”

On his travels, Honigsberg recalled, his filmmaker asked him what he was “getting out of” the documentary. With no hesitation, Honigsberg responded: “humanity.” Honigsberg emphasized a need for respect for the rule of law and for humanity in the United States.

“In your life as a law student, the rule of the law matters,” Honigsberg said to the Yale Law School audience. “There was no law, there were no rules in Guantánamo.” Guantánamo was a “place outside the law,” believed to be outside of American jurisdiction, he said.

“Some of the people who left Guantánamo became radicalized,” Honigsberg said. “Many initially believed in America, the beacon on the hill, and looked to America for the rule of law.” Honigsberg explained that these detainees left with “different attitudes” towards the U.S. because in mistreating them, “we have caused them to wonder about the country they grew up believing had a certain set of values.” The United States “did more harm than good,” Honigsberg concluded.

Reflecting on the documentary he created, Honigsberg emphasized its capacity to foster empathy. “Humanity is everywhere, but some people do not want to see it in others,” he said. “This historical documentation provided me with a deeper understanding on how we are all bound together in our humanity.”

Honigsberg’s recent book, A Place Outside the Law: Forgotten Voices from Guantánamo, is published by Beacon Press.