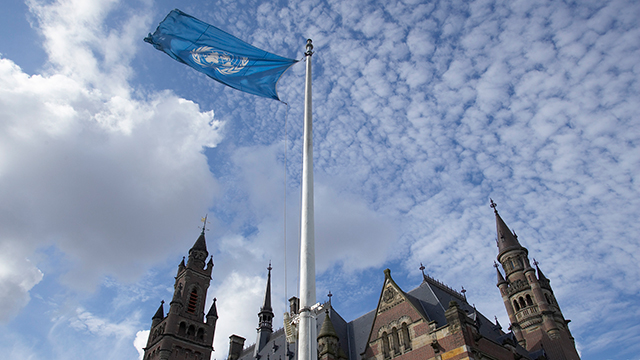 The Peace Palace in The Hague (Netherlands), seat of the International Court of Justice.

Hear from Benjamin Dearden ’21 about his path to a Robina Fellowship and what it’s like working at an international court.

What started you on this path? Share with us some past experiences with human rights and international law.

I’ve always been interested in international work, as a product of my family history and my experiences growing up overseas. As my interests transitioned towards law during my undergraduate experience, international law seemed like a logical place to go. As I actually studied international law and human rights, though, I noticed a pretty strong divergence between two types of work: the first type is working through the very few institutions empowered to actually do things, and it is slow, ineffective, and often constrained. The second type is through NGOs or other organizations, and while it is much freer, often the end result of months of labor can be no more than a strongly worded letter with recommendations that will end up in the trash heap. This isn’t, of course, an indictment of human rights per se, but rather just a statement that, as a new field, human rights still needs to work out the balance between theory and practice, between ideas and results.

While studying, I ended up researching this question with regard to the question of anti-corruption at the international level, and I found that there were very different institutional approaches to solving the problem. I devoted my SAW (the graduation requirement paper) to the question of which models worked to solve these kinds of international problems, and which didn’t. During my research, I discovered the court that currently employs me, and it was definitely among the institutional models that works.

Tell me about your work as a Robina Fellow.

Since October 2021, I have been working at a criminal court that attempts to bring accountability to previously overlooked war crimes and crimes against humanity that occurred in recent history. There are numerous sections tasked with different parts of making the trials run smoothly and fairly. I am in the prosecutor’s office, which means that I am responsible for helping make cogent arguments connecting the accused with the crimes in question.

Currently, our most important cases are in the pretrial phase, which entails lots of evidence review. We have an obligation in the prosecutor’s office to turn over any relevant exculpatory evidence, so I spend a lot of time reviewing that evidence, redacting it, and preparing it for the defense teams to use. I also take on individual research projects that may involve upcoming issues, arguments raised by the defense, procedural motions, and more.

Can you provide an example of a project you’ve worked on?

Recently, we got word that a judge from one of our cases was going to be moved to a different, more important case of ours. One of the case managers remembered that this judge, when he was a defense attorney and academic, had expressed some views that could prove problematic for our theory of the case if he still held them. My task then was to identify exactly what he had previously said on the relevant issues, how it applied or didn’t apply to our case, and what we could do to make our argument fit more within the confines that he set out regarding when the principle we were using should apply. It was a fun job because I got to spend a lot of the day reading academic articles, which made it feel like a flashback to law school.

What are some of the challenges of your work?

The biggest challenge is the volume. No matter how many documents I manage to review in a given day, there are always going to be more. In international court cases concerning past human rights violations, a long history can build up, as numerous institutions investigate the same alleged crimes. As a result, much of the work we have to do has already been done three or four times, and now it is our job to sort through the results of previous investigations. There are definitely hard weeks, where deadlines are looming, but I don’t know if I’ve run into an easy week yet, one where we are just waiting for the next deadline. It is definitely fast-paced.

What are some of your goals during your fellowship year?

I have a few goals: First, I want to become more confident in being given an assignment to produce a memo on some subject and producing it without too much guidance. A lot of that requires familiarity with the systems (which change with each new place of employment), but a general self-reliance in starting research projects would be a good skill for me to continue to develop. Second, I want to feel a sense of progress about the cases that I am working on; that is, I want to feel like the cases have progressed, that victims are closer to getting closure and justice, and that my work in some way contributed to that. And third, I want to make and keep meaningful relationships, both with the other fellows and interns and with the rest of the organization.

What have you learned about human rights law more broadly during your fellowship?

One thing I have learned about human rights law is that it is very different in institutions with police power and institutions without it. While at law school, I spent a lot of time essentially writing exhortations, using theoretical language and references to cases that didn’t have anything other than persuasive authority. Here, on the other hand, the court has the authority to enforce its decisions. In this context, I spend almost no time on the theory, and spend all my time on the procedure, the technical work required to legitimately use that authority. Huge portions of my time are taken up by procedural concerns. For a concrete example, in a weekly roundup of what each intern and lawyer is working on, often many of the weekly tasks are unrelated to human rights or international criminal law specifically. One lawyer might be working on a reply to a defense motion for leave to appeal a procedural issue, while another is working on precedents with regards to disclosure deadlines, and a third is working on witness confidentiality. All of them are important, but none are directly connected to the central issues of the case. Procedure is an important part of giving a fair trial, of course, but it has been an interesting contrast from, for instance, NGO work in the field of human rights law. Honestly, I am grateful for the opportunity to see the nitty-gritty details of each dueling motion, and I am glad that I get to see up close how much of legal work comes down to procedure. It isn’t always thrilling, but I have begun to see how each little procedural battle can end up tilting a case in one direction or another, and I feel more prepared to take some of the practical aspects of working here back with me next time I am working in an NGO setting.