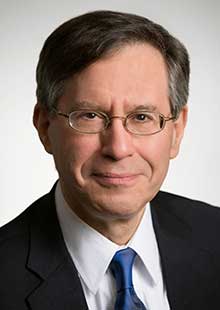 In the context of China’s evolving ideas about domestic law and increased ambitions to play a larger role in global governance, Gewirtz first argued why an essential foundation of domestic stability and justice is a legal system that constrains government and is not only a tool for governing. On global matters, he argued that a foundation of global order going forward must be an updated and strengthened rules-based system, and one that even powerful countries accept.

The second part of Gewirtz’s lecture moved from law to lawyers, arguing that lawyers have distinctively important roles to play today as leaders, both domestically and internationally. The best lawyers have a strong capacity to lead, he said, not only to use technical expertise to assist clients. They also have not only an expert’s knowledge of law, but other characteristics — skills of analysis, persuasion, and problem-solving; an understanding of how institutions work; a commitment to fairness; and a broad exposure to large policy issues — that can make them excellent leaders in many different fields. The unusually broad roles lawyers play as leaders in the United States may have roots in U.S. history, but this U.S. experience is relevant today worldwide.