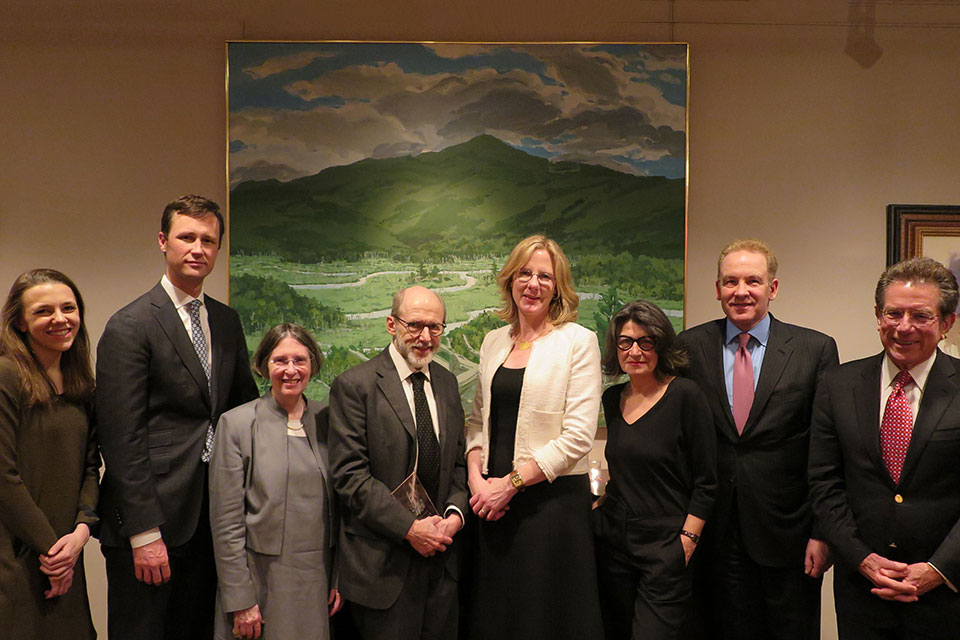 Henry B. Hansmann ’74, Oscar M. Ruebhausen Professor of Law, was the 2018 recipient of the Simeon E. Baldwin Award from the Yale Law School Center for the Study of Corporate Law.

At the presentation of the award, Center Director Roberta Romano ’80 said:

There is a close connection between Simeon Baldwin's and Henry's careers. Baldwin, while a member of the faculty, was not only devoted to the school but was also responsible for putting into place YLS's interdisciplinary tradition, which propelled YLS into the preeminent institution it is today. Henry, no less devoted in his service to the institution, brought further immensely the tradition that Baldwin started, as he was the first joint degree JD-PhD in Economics to join the faculty, so far as I can determine, and his scholarly preeminence is precisely in that vein, using economics to illuminate the most fundamental issues in business law.

Henry is unusual among legal scholars: few academics are fortunate enough to stand for one proposition or are associated with one good idea, but Henry is associated with at least three such contributions—a theory of non-profit organizations that explains the core feature of a nondistribution constraint in terms of information asymmetries between donor and donee; a theory of the ownership structure of organizations grounded in the need for homogeneity in collective decisionmaking rather than attitudes to risk; and the asset partitioning theory of corporations, that stands the conventional view of limited liability on its head. In addition, most legal scholars who are among the most cited write mainly normative papers. While Henry has not only made well-cited normative contributions, he also is equally, if not better known for his research on the foundational question of why organizations are structured as they are, rather than writing on how organizations should be organized. His work has reoriented the field in thinking about corporations (in a way that those solely engaged in normative work have and I think cannot).

Henry has taught us the most basic truths we know about organizational law. He has explained why we have organizational law and why businesses are owned and controlled the way they are. His insights span from investor-owned corporations to law firms to sawmills, nonprofits, and local governments. Every time I have tried to answer a difficult question in organizational law, I have found Henry's work a few feet in front of me, lighting the way. But Henry is more than a great scholar. He is also a dedicated teacher, a hardworking colleague, and a generous mentor. I am fortunate to count myself as one of a great host of Yale Law School graduates whose careers and thinking have grown on the foundation of Henry's wisdom.

In addition to his many articles, Professor Hansmann is the author of The Ownership of Enterprise and, with others, The Anatomy of Corporate Law: A Functional and Comparative Analysis. He is a fellow of the American Academy of Arts and Sciences, past president of the American Law and Economics Association, and a past recipient of a John Simon Guggenheim Foundation Fellowship.

The Simeon E. Baldwin Award was established in 2007 and is presented by the Center to a Yale Law School graduate or faculty member in recognition of distinguished achievement in law and business. Simeon Baldwin, both a student and faculty member of the Law School, was the leading railroad lawyer of his day and was responsible for putting in place the Law School's interdisciplinary tradition. He was also governor and chief justice of the Supreme Court of Connecticut, and a founder and president of an astounding number of professional associations including the American Bar Association, American Association of Law Schools, and American Political Science Association.