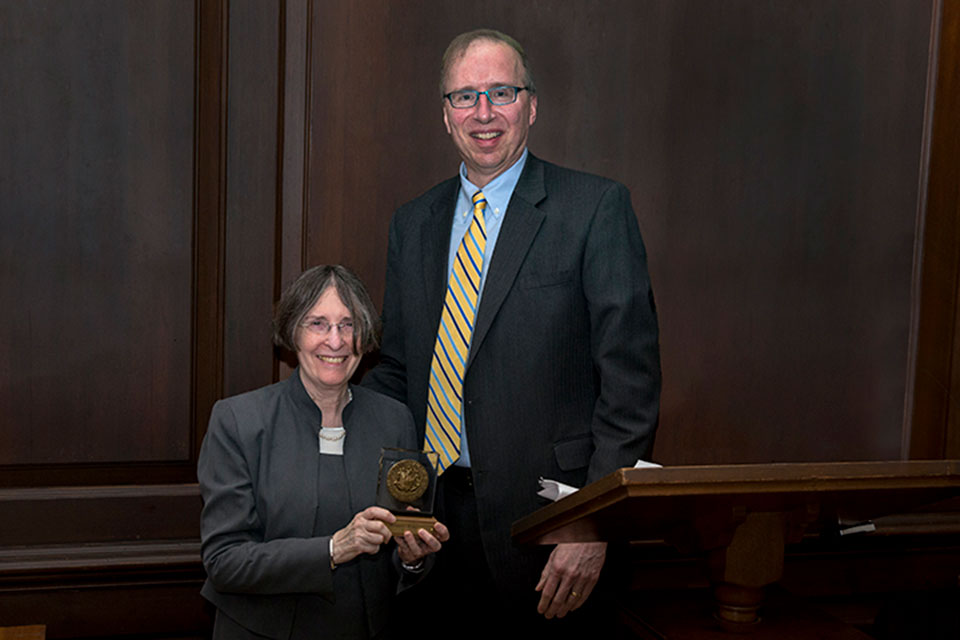 Roberta Romano ’80, Sterling Professor of Law and Director of the Yale Law School Center for the Study of Corporate Law, received the 2017–2018 Marshall-Wythe Medallion from William & Mary Law School. The award was presented at a dinner in her honor on March 15, 2018, at William & Mary. The medallion is the highest honor conferred by the William & Mary Law School faculty and recognizes those who have demonstrated exceptional accomplishment in law.

To illustrate the esteem in which Romano is held by other scholars, William & Mary Law School dean Davison M. Douglas ’83 shared excerpts by William & Mary law faculty about her stature and contributions.

One faculty member, Douglas said, wrote that Romano "has done truly path-breaking work in corporate law with sweeping policy implications. Perhaps her signal contribution was to raise serious doubts about Professor Carey's hypothesized ‘race to the bottom’ among states…. It is no exaggeration to say that her writings on this critical topic have to a large extent disrupted and reshaped the debate on state competition for incorporation business."

Another faculty member hailed Romano as "one of her generation's leading voices in corporate and securities law" and described how she deftly combines empirical evidence and compelling arguments in her writing.

She is "one of the most consistently thoughtful and insightful scholars of corporate law today," wrote a third faculty member. "The role of jurisdictional competition and the market for law are some of the most central questions in the field, and it's safe to say that Professor Romano's work defines the scope of the debate in this area of law."

Douglas said an award named in part for George Wythe, Thomas Jefferson's mentor, seemed particularly fitting for Romano, who has mentored many young scholars throughout her career.

Roberta Romano is Sterling Professor of Law at Yale Law School and Director of the Yale Law School Center for the Study of Corporate Law. Her research has focused on state competition for corporate charters, the political economy of takeover regulation, shareholder litigation, institutional investor activism in corporate governance and the regulation of securities markets and financial instruments and institutions. Professor Romano is a fellow of the American Academy of Arts and Sciences and the European Corporate Governance Institute, a research associate of the National Bureau for Economic Research, a past President of the American Law and Economics Association and the Society for Empirical Legal Studies, and a past co-editor of the Journal of Law, Economics and Organization. She has received the Yale Law Women teaching award three times and is the author of The Genius of American Corporate Law (1993) and The Advantage of Competitive Federalism for Securities Regulation (2002), editor of Foundations of Corporate Law, 2d ed. (2010) and co-editor with Shen Wei, of Financial Regulation After the Global Financial Crisis: US and China Perspectives (2017) (in Chinese).

The Marshall-Wythe Medallion is named for John Marshall and George Wythe. Wythe, one of the leading statesmen of the Revolutionary Era, was William & Mary's—and the nation's—first professor of law. Marshall was among Wythe's first students at William & Mary and went on to have a seminal impact on American history as the fourth chief justice of the United States.