The American Society of Legal History (ASLH) recently elected Ford Foundation Professor of Comparative and Foreign Law James Q. Whitman ’88 as an Honorary Fellow. The Society reserves its highest honor for distinguished historians whose scholarship has made a significant impact on legal history and influenced the work of others. 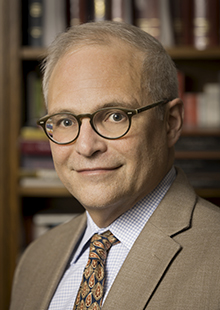 On Nov. 6, 2021 at the ASLH Annual Meeting in New Orleans, the honorary fellows were recognized during their Annual Awards Ceremony. Amalia D. Kessler ’99, Lewis Talbot and Nadine Hearn Shelton Professor of International Legal Studies at Stanford Law School, presented the citation for the fellowship to Whitman.

“Professor Whitman sets a model of scholarly erudition, brilliance, and creativity, as well as respectful, engaged and compassionate mentorship,” Kessler said in her citation. “But what is perhaps most remarkable is that he manages to draw on this erudition in ways that are never narrow and arcane but in service of a highly ambitious research agenda that probes some of the deepest, most enduring questions of social theory while engaging directly with many of our most profound socio-legal challenges today.”

Whitman’s award-winning articles and books have been published internationally and were recognized during the presentation. His most recent book, Hitler’s American Model: The United States and the Making of Nazi Race Law was named one of Foreign Affairs’s Best Books of 2017. His other books include The Origins of Reasonable Doubt: Theological Roots of the Criminal Trial (2008), The Verdict of Battle: The Law of Victory and the Making of Modern War (2012), and Harsh Justice: Criminal Punishment and the Widening Divide Between America and Europe (2003).

Founded in 1956 to foster scholarship and teaching in the field of legal history, ASLH is based in the United States, but its membership is international. The Society holds an annual meeting, allowing historians, law professors, graduate students, lawyers, and judges worldwide to gather and present their research.