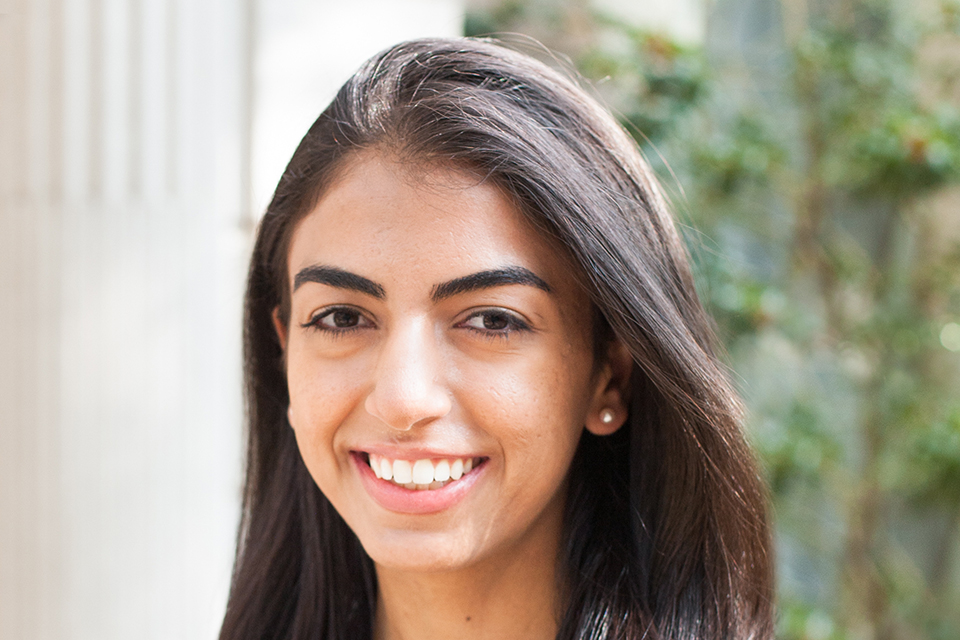 Helia Bidad ’22 is a Law, Ethics & Animals Program (LEAP) student fellow and a J.D. candidate at Yale Law School. Last year, under the instruction of Professor of Law Gerald Torres, she began research on two recent developments in New York state farmworker protections: the favorable ruling for farmworkers in Hernandez v. State of New York and the passage of the Farm Laborers Fair Labor Practices Act, both of which occurred in 2019 after years of organizing. Her work analyzes these victories and the lessons they hold for food justice, including the value of elevating nonelite actors, the importance of interlocking legislative and judicial progress, and the big impacts of “small victories.” She also casts a critical eye on the structural forces that motivate people to oppose food justice reforms. LEAP Program Fellow Noah Macey spoke to Bidad about her ongoing research in this area and recent developments in the fight for farmworker protections in New York.

Your research focuses on litigation surrounding Crispin Hernandez. Will you tell us about his experience and how he came to be the plaintiff in Hernandez v. State of New York?

Crispin Hernandez was a dairy worker in upstate New York. He had gathered coworkers to discuss protesting their unsafe working conditions. As a result of this organizing he was fired and later decided to file suit in New York state court with the New York Civil Liberties Union [in 2016] arguing that a decades-old New York law that denied agricultural workers the right to collective action violated the New York State Constitution, which grants workers a universal right to organize and collectively bargain.

What is the Farm Laborers Fair Labor Practices Act? How is it connected to Hernandez v. New York?

The Farm Laborers Fair Labor Practices Act (FLFLPA) is a law in New York state that grants farmworkers a number of rights, including overtime pay, a weekly day of rest, disability, unemployment benefits, and other labor protections. The FLFLPA had been in the works in New York state for over two decades when it passed in summer of 2019, shortly after Crispin Hernandez won his case in court. Hernandez’s legal victory for farmworker labor rights certainly helped spur support and momentum for the passage of the bill, but the recent Democratic takeover of the New York state legislature was key in the bill’s passage.

Why is it important to have both the courts and the legislature enshrine collective bargaining rights?

Both courts and the legislature have their strengths and weaknesses in terms of the durability of the law. Repealing laws can be viewed as more challenging than a single court case or shift in composition of a court changing established case law. Moreover, you need laws on the books in order to litigate. In Hernandez, the litigation was based on the New York State Constitution and the almost century-old labor law in New York state, the State Employment Relations Act, which excluded farmworkers from labor protections, including the rights to organize and collectively bargain granted by the state constitution. Having both reinforces one and the other. In this case, there were only so many rights that the constitutional basis for Hernandez’s case — the rights to organize and collectively bargain — could confer for farmworker labor rights. Because of this, the FLFLPA was able to complement and strengthen the rights that were extended in the Hernandez case.

Your paper talks about a vision for legal mobilization that revolves around the needs of nonelite people. Could you briefly describe legal mobilization, how it can fail to attend to non-elite actors, and how Hernandez v. State of New York provides a model for future legal efforts?

Legal mobilization names the process in which lawyers represent the interests of groups of stakeholders and advocate for some type of relief or practical policy change. Sometimes lawyers and groups that spearhead this work are, at best, out of touch with the needs of the stakeholder groups they seek to represent. Even mass-membership organizations developed to represent the interests of concerned members of the public…are not necessarily member-driven in their efforts. The research and interviews that I have been able to conduct have indicated that though the Hernandez case was still clearly facilitated and co-led by legal nonprofits, the experience and needs of Hernandez, and of dairy workers more broadly, were centered in the case and its resolution. Hernandez was not just a named plaintiff but a leading advocate and voice for the case, and his leadership in farmworker labor rights has extended beyond the victory of the case as well.

Your paper outlines several interrelated ideas of justice — transcendental justice, environmental justice, and food justice among them. What characterizes these types of justice, and how do you see them reflected in Hernandez v. New York, the FLFPA, and the movement for farmworkers’ rights more generally?

Transcendental justice supports a sort of “unbounded” environmentalism that is more intersectional and systemic in its approach; to quote Robert Gottlieb, it “challeng[es] the very structure and logic of a capitalist social order.” Such a conception of environmental and food justice allows for collaboration between movements that addresses mutual challenges while strengthening their individual movements. I view movements for farmworkers’ rights, including Hernandez and the FLFLPA, as quintessential examples of transcendental justice because they lie at the intersection of food justice and labor justice. Often, environmental progress, including progress on food systems issues, is viewed as being in opposition to progress in the labor movement. But a closer look reveals some of the same underlying issues and actors are at the root of the injustices that both movements are responding to. Common strategies could help both movements more than if they were going it alone.

You mention the connection between “small victories” and systemic change (in the context of Saul Alinsky’s work especially). What are small victories, in a social-movement context?

Small victories help build momentum in a movement as well as energy and engagement among activists. Organizing and activism can be tiring and taxing work; if people are able to witness and be involved in successes, this can help prevent burnout or disillusionment. This is especially true for work directed towards a long-term goal. When I was in college, I was part of a group of student and community activists working against the development of a local urban farm on university property. We held a direct action that led to a meeting with the university administration to discuss the planned development and potential solutions. We didn't get what we wanted out of the meeting, but I would call getting the meeting and establishing a direct channel with the administration a small victory.

The FFLPA created a wage board, which was supposed to release new recommendations about overtime policy at the end of 2020. What were its recommendations?

In response to a heated political debate, the Farm Laborer Wage Board recommended to New York state legislators that the overtime pay threshold for farmworkers be set to 60 hours as opposed to 40 hours, which would provide farmworkers with more just compensation. Farmworkers and progressive groups advocated for the 40-hour designation but their interests and advocacy seem to ultimately have been outweighed by the interests of farmer and Big Ag interest groups.

You are clear that these wins are large strides forward for farmworker welfare, but that the larger incentive structures still aren't aligned with justice. You write: “Operating within this system of racial capitalism will not change the profit oriented and individualistic motivations that dominate the system. As a result, any success in advocating for justice…is a minor relief from broader issues built by racial capitalism.” Could you elaborate on how these new laws stop short of enacting structural change, and what real systemic change would look like?

The Farm Laborer Wage Board decision is a perfect example of how the new law stopped short. It allowed for overtime pay, but the point at which overtime applies was still up to the recommendation of the Wage Board and ultimately the legislature, which are under the influence of the profit-oriented and individualistic motivations of Big Ag. One example of systemic change would be greater support for farmworker-owned cooperative farms that aren't beholden to the same racial capitalist motives.

You also write about how “systemic reform must be accompanied by incremental reform in order to provide relief for the day-to-day injustices that vulnerable communities face.” What is the relationship between incremental and systemic reform?

Systemic reform is needed to provide real, long-term solutions to environmental injustices. But that work can span not just years but decades. I believe that important and necessary work must be accompanied by smaller-scale efforts, particularly to address the needs of vulnerable populations who need more immediate relief.

What lessons should other environmental justice campaigns learn from the dual victories in Hernandez and the FFLPA?

Some helpful takeaways include the need to center nonelite voices in advocacy in order to not only secure victories but also to fully activate or implement them after reform is made or laws are passed; the importance of keeping and building momentum, which is what allowed the FLFLPA to pass after two decades; and the importance of capitalizing on opportune political moments, such as the Democratic takeover of the New York state legislature in the case of the FLFLPA.