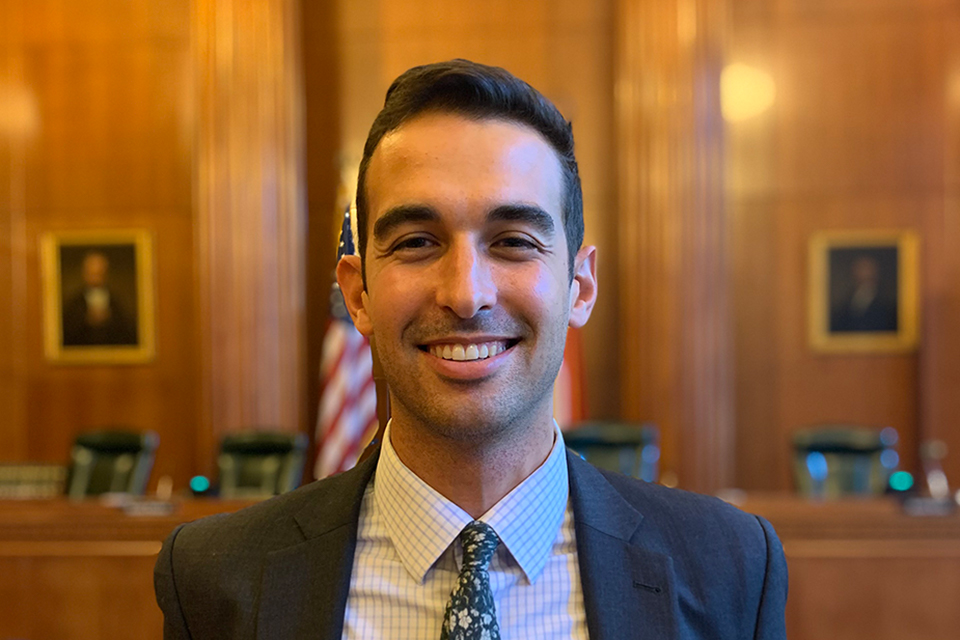 Sam Davis ’20 is a Liman Fellow at the ACLU of North Carolina Legal Foundation, in Raleigh. Prior to his fellowship, he clerked for Associate Justice Anita Earls of the Supreme Court of North Carolina. At Yale Law School, he was co-director of the Rebellious Lawyering Conference and a member of the Veterans Legal Services Clinic.

Tell us about your work at the ACLU of North Carolina Legal Foundation.
There are two main aspects. The first is leading an investigation into the application of two statutes that, essentially, make it a crime for students from kindergarten to 12th grade to disrupt or disturb the school’s environment. The statutes are vague and give police officers and school officials a significant amount of discretion to decide which students are going to face criminal consequences. At this stage of the investigation, I’m trying to build a factual record and a better understanding of how these statutes operate across the state. What I have learned so far is that students have been referred into the criminal justice system for conduct that should be addressed by school officials — things like cutting class, talking back to a teacher, and yelling in a hallway. It also appears that there are tremendous disparities in which children are subject to criminal punishment. In North Carolina, it seems to be disproportionately Black students and students on individualized education plans.

The second aspect of my work is supporting ACLU-NC’s broader litigation and advocacy efforts across a range of issues. North Carolina has been a battleground on numerous critical civil rights issues over the past few years, and ACLU-NC has been on the frontlines. Because it’s a small office and everyone is a generalist, I’ve had the chance to dive right in on cases where we’re fighting to protect access to abortion, expand voting rights, and enforce the constitutional rights of students, protesters, and people in prison. As someone who wants to work across different areas of the law, I find the mix of projects and the exposure to the various stages of litigation rewarding.

How did you first become interested in addressing the school-to-prison pipeline?
I worked in education in a couple different capacities before law school and was appalled by the egregious racial disparities that define K-12 education in the United States. What quickly became clear — and what motivated me to apply to law school — was that those disparities were rooted in the laws that structure how opportunity is allocated across communities that are starkly divided by race. So I came to law school really interested in tackling these fundamental questions about public education. Through classes with professors like Douglas NeJaime, Anne Dailey, David Schleicher, and Owen Fiss, I encountered new ways to think about the purpose and structure of public education. Through summer internships at a public defender’s office and at the NAACP Legal Defense Fund, I saw how the questions I was asking intersected with other areas of the law, especially the criminal justice system. These experiences also gave me a framework for contextualizing my own childhood attending public schools. I better understood why, if I got into a scuffle at recess, I was given a “talking to” rather than arrested, or why I was taught to celebrate how Brown v. Board ended segregation in a classroom where the students were almost all white.

What I find so infuriating about the school-to-prison pipeline is that it is antithetical to the very function that public schools should perform in a multiracial democracy. Public schools remain incredibly racially segregated. Schools and communities with predominantly Black populations are persistently underfunded — and then, in part due to that segregation and underfunding, Black students at a very early age are made disproportionately vulnerable to invasive policing and criminal system involvement. That has lifetime consequences for children in terms of their academic and professional trajectories. These punitive practices send a profoundly corrosive message to children and their communities about who society values, and they undermine the goals of equal citizenry. Children can’t thrive as students if we don’t support them as children first; keeping kids in schools and out of jails feels like the absolute bare minimum we can do.

What has been the most unexpected part of your fellowship?
How varied my days are. Before my fellowship I was a judicial law clerk, where the work was intense but generally predictable — I had a relatively narrow set of tasks to complete on relatively fixed timelines, so I usually knew what I needed to get done when I walked into the courthouse each morning. By contrast, most of the fellowship work is either self-directed or dictated by events entirely outside of my control. Either I’m responsible for figuring out what needs to happen on any given day to keep a long-term project moving forward, or I’m scrambling to respond to a court order or a request from opposing counsel or some concerning incident that we just learned about. The work itself also takes many different forms. I’ve gone from spending almost 100 percent of my time engaged in legal research and writing to spending significant time on project management, community outreach, development of advocacy strategies, and research into facts — though I still spend a lot of time doing legal research. It’s a different rhythm that has expanded my sense of what life as a lawyer can look like.

How do you hope to contribute to the broader movement?
I hold on to the belief that fostering thriving, integrated public schools is critical if we are ever going to achieve meaningful equality as a nation. I think the vision the Supreme Court began articulating in Brown of how public education enables democracy to flourish, which we’ve never come close to achieving and in many respects have chosen to abandon, is worth taking seriously and worth fighting for. More concretely, I hope my project can both build upon and amplify the remarkable work activists have done and continue to do resisting racial oppression in both the education and the criminal justice systems here in North Carolina.

“I hold on to the belief that fostering thriving, integrated public schools is critical if we are ever going to achieve meaningful equality as a nation.”
— Sam Davis ’20

You attended college in North Carolina and clerked on the North Carolina Supreme Court right after law school. What made you decide to stay and spend your fellowship year there?
The choice to spend my fellowship year in North Carolina was an easy one: my spouse and I have loved living in Durham. We’ve appreciated being somewhere that feels both new and familiar, and we wanted to continue immersing ourselves in this community we’ve been privileged to become a part of. I also believe that cultivating a sense of place is important to being an effective public interest lawyer. Being rooted in community keeps me connected to the people I’m advocating for and the issues I’m working on. It also provides resources and support to draw on in navigating the emotional challenges that come with doing this kind of work. At the same time, North Carolina is in the middle of a real fight over what kind of state it is going to be — will the state continue making strides towards justice, or is it entering into a period of retrenchment? All of these factors made staying in North Carolina this fellowship year a no-brainer, and I’m grateful to the Liman Center for making this opportunity possible.

I also think there are real advantages to spending a fellowship year in a community I have some prior familiarity with, especially given that my project involves litigation. It takes a long time to get a lawsuit off the ground, as I’m learning, and the clock starts ticking immediately on a year-long project. The fact that I came into this job right after clerking for North Carolina Supreme Court Justice Anita Earls, who was a pathbreaking civil rights attorney in North Carolina before joining the bench, maybe gave me a bit of a head start. At a minimum, it gave me some useful background knowledge about the law, legal culture, and history of this state that I hope has enabled me to make meaningful contributions right away. I’d definitely encourage others interested in fellowships to consider seeking out opportunities in a place they have some connection to, or in a new place where they might consider putting down roots. 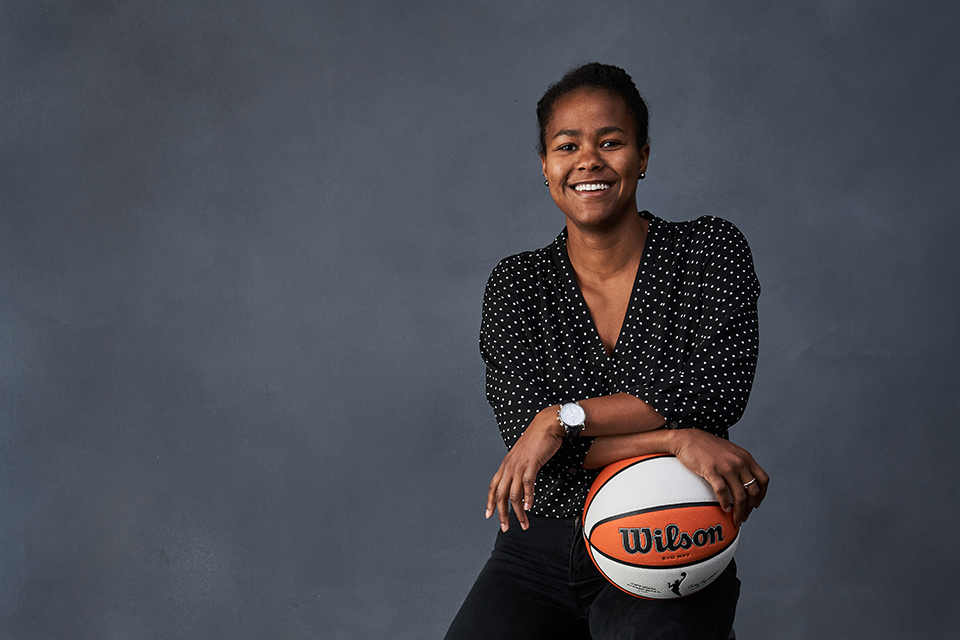