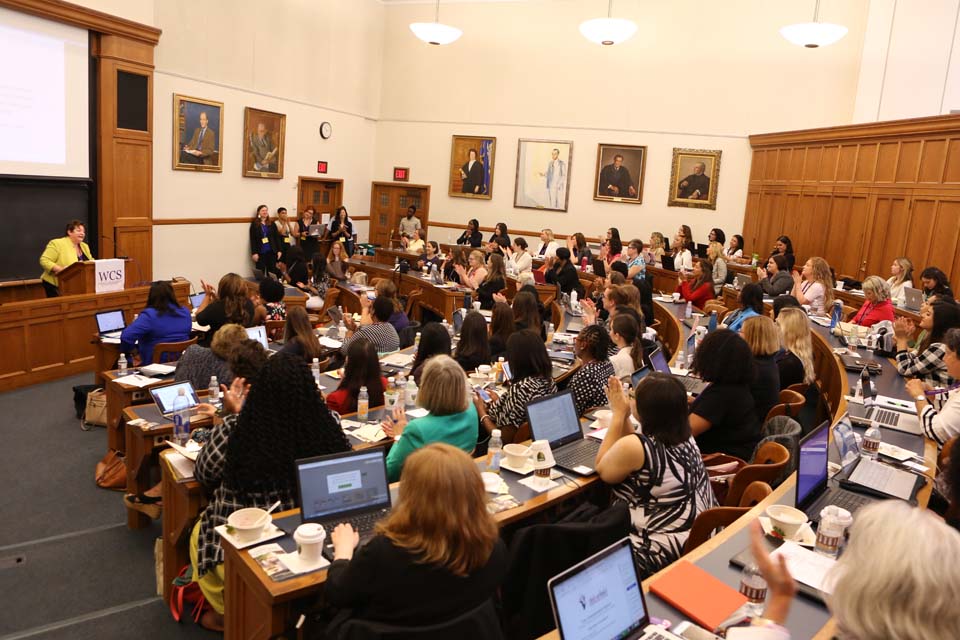 For more than two decades, the Women’s Campaign School at Yale has provided an intensive, non-partisan crash course for women worldwide on how to run for office and win.

But this year, in the wake of a U.S. Presidential election that jolted many women into a more civically active frame of mind, the energy will be decisively different.

“The past few months we’ve seen this fabulous human tsunami of women uprising and it is so exciting,” said Patti Russo, the executive director of the School. “I have been in this business for a long time and I’ve never seen anything like it.”

Applications for this year’s June session topped 500 for the 80 spots allotted in the class, far exceeding any prior application record.

“Women are inspired, they are revved up,” said Russo. “We are so encouraged by the interest.”

The Women's Campaign School (WCS) at Yale University is a non-partisan, issue neutral leadership program, whose mission is to increase the number and influence of women in elected and appointed office in the United States and around the globe. Currently, women make up only 21 percent of the population in the U.S. Congress and 19 percent in the U.S House of Representatives.

“The numbers are pitiful, especially when women make up 51 percent of the population,” said Russo.

To many, this underrepresentation of women in government means that the issues women care about often do not get prioritized and funded, and those views don’t get incorporated into laws and regulations.

The WCS was founded in 1993 by author and scholar Andrée Aelion Brooks with the help of Yale administrators who were instrumental in giving it a home at the University, including former University Vice President Linda Lorimer ’77 and Yale Law School Professor Kate Stith. Through the years, the program has graduated several high-profile alumni, including U.S. Senator Kirsten Gillibrand of New York, former U.S. Representative Gabby Giffords of Arizona, and U.S. Representative Elizabeth Esty ’85 of Connecticut.

The five day-intensive session takes place each year at Yale Law School in June. While it is an independent program, the Law School and University community and leadership have embraced the WCS from the start.

“We have had an extraordinary relationship with each and every Yale Law Dean in the 23 years that we’ve been here,” said Russo. “Yale is our family and truly has been an extraordinary partner.” 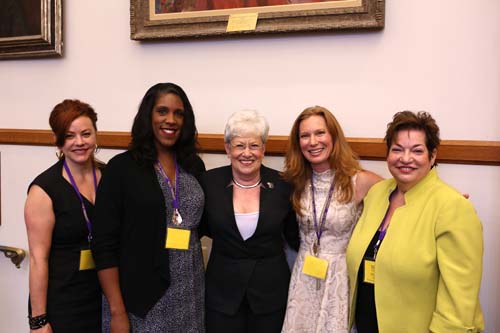 There has also been a generous record of financial support for the program from several groups and individuals who provide funds to send Yale College students to the program each year. Yale Law Women, a student organization, also provides a scholarship to sponsor one Law School student each summer.

As the program has developed, Russo said they have begun to see a trend of younger and more diverse candidates applying from across the country and the world. Through a partnership with the International Republican Institute, the WCS has a strong international component to recruit women to run for office globally. This year, women will be attending from Australia, Belgium, Canada, Croatia, Jordan, Malaysia, Peru, and Tunisia.

“Our School is for women of all ages and backgrounds,” explained Russo.

The five-day course includes experts of varying political backgrounds offering practical advice and instruction on topics such as budgeting staff, raising campaign funds, debate prep, media relations, ethics and more. The schedule is crafted to reflect the exhaustive demands of the final weeks of a general election campaign.

At the core of the curriculum is developing the confidence necessary to succeed in the rough and tumble world of politics.

“So many of the women say that their self-confidence was raised after going through the program,” said Professor Stith, who was instrumental in launching the WCS and has been the Yale faculty sponsor of the School since its inception.  “Our graduates tell us that they feel much more comfortable speaking publicly, speaking extemporaneously, and speaking with people from different backgrounds and different viewpoints on the key issues.”

“We have this crisis in our country where women have a lack of confidence in themselves and that is something that women get at our program,” added Russo.

Another core value of the program is teaching women to work together regardless of political affiliation — an example that is not often seen in politics today.

“In this era of polarization, we think it is important for people to learn to work across the aisle as that is the way things get done,” added Stith. “Our graduates have told us that this is one of the most important lessons that they have learned.”

During the program, students work as teams made up of people from different regions and political parties so that they learn to find common ground and respect differences of opinion.

“This mean-spiritedness in Congress is paralyzing our country,” said Russo. “Nothing is getting done. The only ones who are actually working collaboratively are women.”

Sarah Esty ’16 is the youngest-ever graduate of the Women’s Campaign School. At just 15 years old, she and her mother Elizabeth Esty went through the program together in 2005. Elizabeth Esty was preparing to run for Town Council at that time and Sarah Esty had volunteered to manage her campaign. 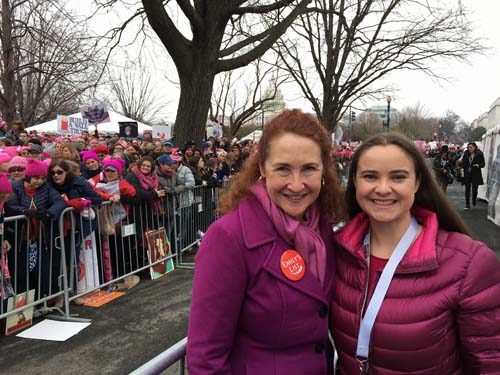 “WCS was both informative and inspiring,” said Sarah Esty. “We learned so much in that week, and loved being part of a cohort of politically engaged women from across the country and even the world.”

Elizabeth Esty, a Democrat, won the Town Council race with 68 percent of the vote and went on to win a seat in the Connecticut State Legislature and then the U.S. Congress, where she currently serves. Sarah Esty is now an Associate at McKinsey, and was recently the National Region 2 Voter Protection Director for the Democratic National Committee and Hillary Clinton Campaign. She has managed half a dozen campaigns, worked on many others, and has lead countless campaign skills training sessions for staff and volunteers.

“Both of us continually go back to the things we learned at WCS and find that it provided us a solid foundation of skills and frameworks for a what has become a life of political work for both of us,” Esty said.

Dafna Michaelson Jenet attended the WCS in the Summer of 2016 right before she ran and won her election to represent House District 30 in the Colorado State Legislature.

Jenet said the program gave her the skills she needed to succeed in her campaign and be an effective legislator once in office.

“It was tremendous to be able to learn from and study with women across the political spectrum,” said Jenet, a Democrat. “It certainly helped in learning how to effectively message my campaign, but more than that it taught me keys to building relationships across the aisle.”

Jennifer Tooker, a Republican who was elected to the Board of Finance in Westport, Connecticut, agreed that the nonpartisan nature of the School is critical.

“We are all there because we are women supporting women in the pursuit of our collective passion for leading our communities and helping others through public service,” said Tooker. “What an amazing, real, long-lasting bond. I feel so fortunate to be part of the WCS-Yale family.”

Tooker said the intense experience of the program really prepares women to execute a winning campaign.

“Running a winning campaign and being a winning candidate is not easy,” added Tooker. “It takes knowledge, skill, attention to detail, courage, drive, and lots of hard work.”

While the new enthusiasm behind women running for elected office has Russo and the leadership at WCS excited, they know that in order to keep up the momentum, there is still much work to be done. Russo is focused on fundraising to expand the program’s offerings to shorter sessions during the year that would cultivate women who are not quite ready to run, but are learning more about the process for the future.

“We need to develop a pipeline of well-trained women preparing to run for office,” said Russo. “That is essential.”

Another way to do this, Russo said, is to ensure that WCS alumni not only win campaigns, but encourage and mentor others to follow in their footsteps.

And it is clear that recent graduates of the program seem ready to take that on.

“The playing field is not level,” said Jenet. “If we dedicate our time to encouraging, training, and supporting female candidates, and we achieve parity in the candidate field, then I believe we will begin to see the number of elected women reaching the 50% mark. And in general, I believe the entire candidate quality will be increased.”

Tooker agreed that more women in government and leadership positions is something that is good for everyone.

“It works. The data is clear,” said Tooker. “Ensuring people with different perspectives, life experiences, priorities, and solutions are part of decision making is essential. More inclusive, more representative and better decisions are made.”

For Sarah Esty, who was bit by the political bug early on in her life, the most important part of fixing this tremendous gender disparity in government is by persistently asking women to step up to the challenge.

“The evidence suggests that when women run, they win at the same rates as men or higher,” said Esty. “The real source of the gender gap in politics is women not stepping up to run in the first place.”

Esty cited a frequently quoted statistic that women need to be encouraged seven times to run before they actually do.

“So let me be one of those seven nudges for any woman thinking of running,” said Esty. “Women have so many different skills and life experiences that they bring to the table, and we would all benefit from having more women at all levels of government. Also, know that by running, you're setting an amazing example for all the little girls out there.”

Seeing the incredible impact that graduates of the WCS are making around the world is something that has left Russo amazed and inspired. And in 2017, she’s feeling hopeful that this unprecedented surge in passion and engagement is here to stay.

“All of us at the Women’s Campaign School stand ready to take this energy and turn it into something truly transformative,” said Russo. “For any woman out there who is waiting for the right time to jump in, this is your moment.”