In 2017, a groundbreaking study found that although Asian Americans have been the fastest-growing minority group in the legal profession for the past three decades, they were making only limited progress in securing leadership roles in law firms, government, and academia.

This week, the American Bar Foundation and the National Asian Pacific American Bar Association released its follow-up report, A Portrait of Asian Americans in the Law 2.0: Identity and Action in Challenging Times. The study’s authors noted that in the five years since the initial report, the United States has experienced a rise in anti-Asian hate and violence, a growing movement to address anti-Black racism, and the COVID-19 pandemic. The study found that while there has been improvement, many of the same concerning trends persist for Asian Americans in the legal profession. 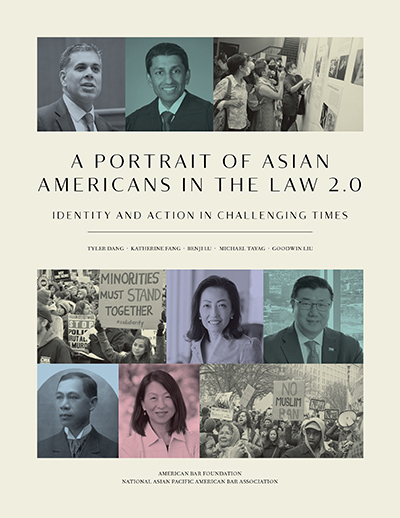 The two-year study — co-authored by California Supreme Court Justice Goodwin H. Liu ’98, Tyler Dang ’22, Katherine Fang ’22, Michael Tayag ’21, and Benji Lu ’24 — compares data from 2021 with that from 2017 on law school enrollment, career advancement, and political participation. With support from Yale Law School, data was collected from a dozen focus groups and a national survey of more than 700 Asian American lawyers, as well as literature on diversity in law schools and the legal profession.

“Justice Liu and other Portrait Project collaborators have long underscored that representation is not simply a matter of optics but integral to forging a more equitable society — in the way opportunities are distributed, communities served, and consequential decisions made,” said Fang, one of the study’s co-authors. “Inclusion remains an urgent priority, more so than ever because of dramatic increases in anti-Asian rhetoric and crimes.”

The report’s first key finding is that, compared to five years ago, “Asian American attorneys indicated greater engagement with social and political issues, along with a desire to change and improve society.”

The report also found that underrepresentation of Asian Americans persists throughout the top of the legal profession, despite some progress, including in the appointment of federal judges, the ranks of general counsel, and law school enrollment numbers.

Secondly, the report states that the number of Asian American federal judges has increased over the past five years, growing to 6% of active federal judges compared to 3.4% in 2016, and Asian American and Pacific Islander (AAPI) enrollment in law school increased by 14.5% from 2017 to 2021. But the study found that despite being the largest minority group at major law firms, Asian Americans also experience the highest attrition and continue to have the lowest ratio of partners to associates. Only 4.3% of equity partners at major firms in 2020 were Asian American; almost 90% were white.

Third, the study found that increased institutional support would “reduce barriers to advancement and improve the professional lives of Asian American attorneys.” As in the 2017 report, the new study underscores the importance of improving mentorship for Asian American law students and career professionals. Respondents cited a lack of formal leadership training programs and a lack of recognition for work, both overt and implicit racial discrimination in the workplace, and work-related mental health issues as obstacles to career advancement.

“In response to events of the past five years, including the pandemic and a rise in reported anti-Asian hate and violence, Asian American lawyers have leaned into affinity groups and a wide range of advocacy efforts to combat discrimination, promote public safety, and educate our citizenry,” said Justice Liu. “It helps to have Asian Americans in visible leadership roles, and we’ve seen progress on federal judges and Fortune 1000 general counsel. But Asian Americans remain underrepresented among law clerks, state judges, and law firm partners, and their numbers are disturbingly low among top prosecutors, the officials who set priorities and allocate resources for the safety of our communities.”

Benji Lu ’24, a co-author of the study, said he attended a talk on the inaugural Portrait Project when he was considering law school. “It left a deep impression on me at that juncture in my life,” he said. “It’s an honor now to give back by continuing that work, and I’m inspired by the support that so many members of the Asian American legal community have offered to make it possible.”

“It was not only humbling, but also confirmed the importance of giving voice to the historically little-recognized experiences of Asian Americans in our profession,” said co-author Michael Tayag ’21. “We hope the study will provide an empirical grounding for broader conversations about those experiences and possible directions for reform.”

Tyler Dang ’22 first began work on the report as a law student. “I see the persistent barriers, despite some signs of progress, that face Asian American lawyers like myself,” he said. “But I affirmatively choose to focus on the stories underlying those sometimes stark numbers about Asian representation, and the privilege I’ve had in hearing and documenting them as part of the Portrait Project 2.0 team. Working on this project has redoubled my personal commitment to follow in the footsteps of trailblazers like Justice Liu and many others in the report and to ensure my communities and all communities have the chance to be not just visible, but active members of the legal profession with the accompanying power and dignity that such status grants.”