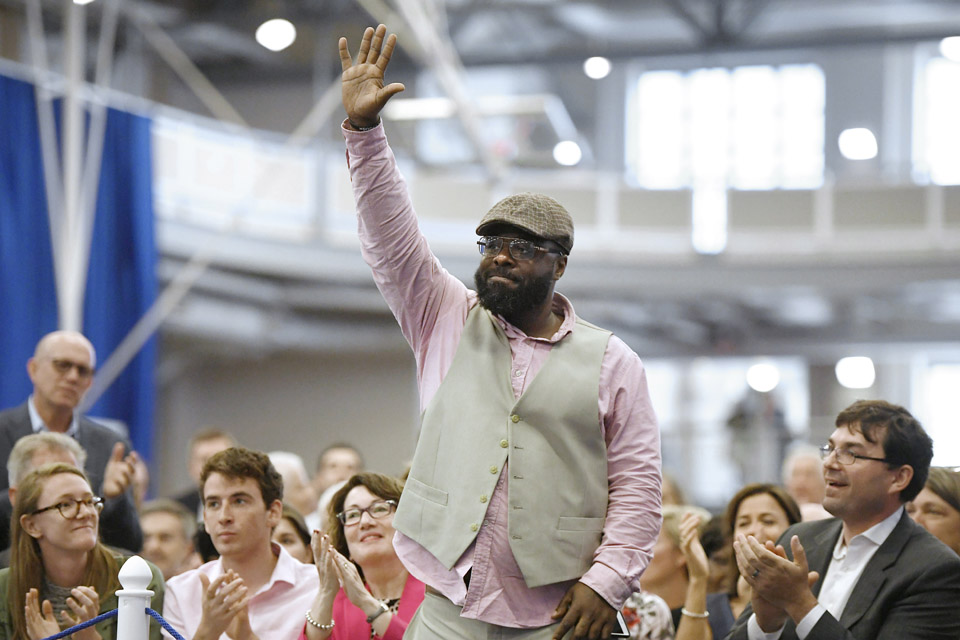 Vernon Horn spent nearly half his life in prison for a crime he did not commit. His cries for help, his outrage over the grave injustice, fell on deaf ears for more than a decade. The only thing that kept his case alive was a steadfast determination to show the world the truth. But everything changed in 2017, when he connected with a Yale Law graduate and a group of devoted students who were determined to set him free. On April 25, 2018, after 2500 hours of dogged investigation and dedicated lawyering, Horn walked out of a New Haven Superior Court a free man, completely exonerated from the crime. And on May 21, 2018, he came to Yale Law School’s commencement ceremony to thank the graduating students who worked so hard to prove his innocence.

For 17 long and painful years, the law failed Vernon Horn.

After losing his parents at a young age, Horn found himself falsely accused of perpetrating a convenience store robbery-homicide in New Haven at just 17 years old. His trial lawyer failed to conduct any investigation, hire an investigator, or even review the State’s evidence before trial. He was convicted and sentenced to 70 years behind bars without the possibility of parole.

For the first 15 years of his sentence, Horn, of New Haven, fell victim to a flawed criminal justice system that left him without a true advocate on his side. So he sat toiling behind bars as an innocent man watching life pass him by, holding onto a glimmer of hope that the truth might prevail, but coming dangerously close to giving up.

In 2014, Horn had a fleeting stroke of luck when he was temporarily freed after winning his state habeas petition on ineffective assistance grounds. But two years later, the Connecticut Supreme Court reinstated his convictions in a unanimous 6-0 decision, unaware of new exculpatory evidence that would later come to light.

Horn returned to prison, leaving behind a wife and baby daughter who he brought into the world during his 21 months of freedom. He was only permitted to see her once in the year to follow. They were not even allowed to touch.

At that point, sitting dejected in a prison cell, Horn wrote a heartbreaking letter that got the attention of one of his new lawyers, David Keenan ’13, who was recently assigned to his case through The Office of the Federal Defender for the District of Connecticut.

The letter stated: “Justice delayed is justice denied...I am innocent and suffering... At the present moment I am on a hunger strike 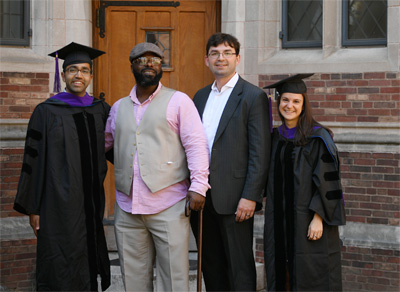 and will rather end my life [than] to suffer this way...Judge I would like to know if I die will my case still be litigated, so that my daughter will know the truth of this injustice that has been perpetrated against me?"

Keenan was struck by the letter, and within a matter of days, he visited Horn for the first time.

On the long drive back, inspired by his conversation with his new client, Keenan realized that they would not be able to free Horn based on some legal technicality.

“I knew we needed to prove that he was actually innocent,” recalled Keenan. “And that is exactly the approach we ended up taking in Vernon's case.”

“As soon as I met Vernon and familiarized myself with the details of the case, it became clear to me that he was innocent,” said Gifford.

When the case was transferred to the federal defender’s office in Connecticut, Gifford and Jain were committed to figuring out a way to stay involved.

“I was determined to keep working on his case in part because I wanted to do everything I could to right an unfathomable wrong—a man was serving a 70-year sentence for a crime he did not commit,” said Gifford.

Now, with a group of passionate law students and a fresh set of eyes in the federal defender’s office from Keenan and his supervisor Terence Ward, the team got to work. Calling themselves “Team Horn,” the group also included several other talented lawyers, including Quinnipiac Law Professor Sarah Russell ’02, First Assistant Public Defender Kelly Barrett, and pro bono attorneys from Arnold & Porter in New York.

The students worked to help review trial evidence and investigative materials as Horn’s attorneys built a factual record of the case. And the federal defender’s office set out on the road looking for any missing data or records that could shed new light on the case. ﻿﻿ 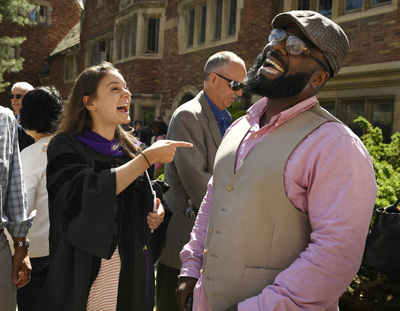 After 2500 hours of painstaking investigatory work, the team soon uncovered vital evidence that would change everything.  At Horn’s trial, the State had introduced a one page “call detail record” into evidence that documented five phone calls from a cell phone stolen during the robbery.  Two of these calls were purportedly linked to Horn. But Keenan noted that one of the columns on the call detail record labelled “ORIG” contained historical cell site data that had been overlooked by the State and Horn’s prior lawyers.

Keenan also discovered two search warrants in the New Haven Clerk’s Office that had not been docketed until 2014. Following that lead, an investigator then tracked down 137 pages of phone records that were still sitting at a retired detective’s house and had never been logged into the New Haven Police Department’s evidence room.

Together, these records turned the case on its head—completely discrediting the State’s central evidence that implicated Horn during his trial. They proved that Horn was never in possession of a cell phone that was stolen during the robbery as prosecutors alleged all along—the only thing that placed Horn at the crime during his trial. The reinvestigation also determined that two of the State’s witnesses against Horn had perjured themselves.

In April 2018, after learning the results of what the judge called an “impressive” and “exhaustive” investigation, the State's Attorney's Office announced that it would not defend the conviction, and Horn was freed without even having to file an amended habeas petition.

“I could hardly believe the news,” said Jain, who was present in court when Horn was released. “After all that Vernon had been through—nearly two decades of incarceration—to see him finally vindicated was just overwhelming.”

At the April 2018 hearing in which he was released, the handcuffs were removed from Horn’s wrists and he addressed the court, humbly thanking Ward, Keenan, the students, and the team of lawyers who worked hard to correct this serious injustice.

“It came to a point where I wanted to end my life, that's how hard it was,” said Horn to the judge. “I know you guys have probably never seen a jail cell, but it's heavy when you're innocent…It's just—I'm overwhelmed, I really am. I just want this criminal justice system to really get better and learn from this mistake.”

An emotional Horn also recounted how the Yale Law students helped bring him back from the brink of desperation.

“The Yale Law students, they were wonderful,” Horn said at the final hearing. “They encouraged me to keep going when I didn't want to live anymore.”

On a beautiful spring day in May, Horn arrived to the Yale Law School campus to watch the students who had worked on his case graduate. During a powerful commencement moment, Dean Heather Gerken described the incredible case to the crowd of over a thousand people, asking Horn to stand and be recognized. He was met with thunderous applause.

This was a moment Horn could not have imagined just a few short months ago. And it was a powerful moment for those on “Team Horn,” too, who had fought tirelessly to set him free.

“I am inspired by Mr. Horn's perseverance,” said Keenan. “He taught me an incredible amount about lawyering—to see your clients as equals, to listen to what they have to say, to never take no for an answer, and to never forget the enormous human cost of our system of mass incarceration.”

“In the face of so much adversity, Vernon has remained incredibly strong, kind, generous, and thoughtful,” added Gifford, noting how she will never forget the moment her client learned about the new evidence.

“I remember visiting Vernon after the Federal Defenders discovered critical exculpatory evidence. I will never forget that feeling of seeing hope in his eyes.”

After his release, Gifford and Jain had breakfast with Horn and accompanied him shopping. They also started a GoFundMe Page that had raised over $18,000 as of June 2018 to help Horn build a new life after so much lost time.

For the teachers who watched this play out, Horn’s case is a powerful example of the bonds that can be formed through the attorney-client relationship.

“Our students partnered with David Keenan to see Mr. Horn’s case through to the finish line and were present when he walked out of the courthouse as a free man,” said Gohara. “The fact that Mr. Horn made a special effort to attend their graduations is a testament to the strength of the attorney-client bond they built with him as well.”

For Clinical Professor Fiona Doherty, who taught and mentored Keenan during his time at the Law School, the case was particularly meaningful to see.

“I could not be more proud of David,” said Doherty. “All of the odds were stacked against him, but he exposed a horrific injustice through his fierce resolve, exacting analysis, and deep commitment to his client. There were many difficult days on the road to victory, but David never wavered in his steely determination to secure Vernon’s release.”

Horn’s case is also a prime example of the how the unparalleled legal training provided at Yale Law School uniquely prepares future lawyers to handle cases of a lifetime like this one.

“Clinics have been the absolute highlight of my law school experience,” said Jain. “I came to YLS for the clinical program and have learned so much from each clinic I’ve taken. These experiential opportunities have allowed me to build critical skills and stay grounded while in law school.”

“YLS gave me the intellectual space to find and pursue my professional calling,” said Keenan. “It also introduced me to numerous professors and classmates who nourished my professional and intellectual interests. The Law School has had a tremendous effect on the type of lawyer and person I am and I don't think this case would have been possible without that background.”

And while this case illustrates the dark side of the law—how the vulnerable and underrepresented can fall through the cracks of the system—it also demonstrates the quiet power of everyday lawyering that can right even the most egregious wrongs.

“To be honest, working on Vernon’s case has taught me that lawyers can destroy people’s lives, but they can also help transform them,” said Jain. “In 1999 and 2000, Vernon’s life was torn apart by the criminal legal system. In 2017 and 2018, lawyers at the Federal Defenders listened, investigated, and worked hard, and Vernon finally regained his freedom. If lawyers talk less and listen more, we can move from correcting our own profession’s mistakes to affirmatively building a more just world.”

As Keenan noted while standing before a Judge on the day of Horn’s release, when lawyering is approached with humility, passion, and perseverance, anything is possible.

“This is an example of what our legal community can accomplish when the brightest minds from public service, academia and private practice work together,” Keenan said. “The moral of this story should not be that we performed some heroic act by saving Vernon's life. Let the historical record be clear, there was no magic here, no special lawyer trick, just simple, old-fashioned hard work.”