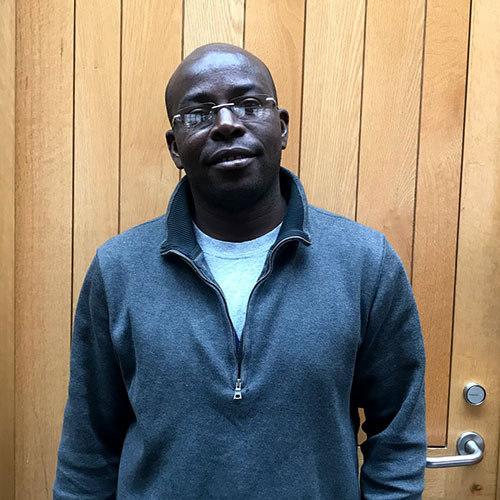 Nixon Boumba is a Haitian human rights activist and member of the Kolektif Jistis Min nan Ayiti (Haiti Mining Justice Collective). Boumba has been working in mining-affected areas of Haiti to ensure that local people understand their rights in regard to the extractives industry. Besides his work on mining, Boumba is also a supporter of economic and cultural rights in Haiti, a staunch advocate on behalf of all marginalized and oppressed populations in Haiti, and a leading figure calling for vigilance and justice in Haiti’s current development climate, which is marked by notoriously low wages and controversial efforts to create industrial and tourist zones. Boumba also works on issues of gender and sexuality in the context of humanitarian aid.

Q: How did you get into human rights work? What motivates you to keep going?

NB: I came from a very poor family in a very marginalized area in Haiti. All of my life, I wanted to understand how we could transform our unjust society. I knew that I needed to be able to take care of my family, but even if I was, say, a successful businessman, I couldn’t change the country in all the ways I’d want to. Using human rights as tool to achieve social change in my country is what motivates me.

I’m trying to integrate and connect different human rights activists to create a broader social movement to end patriarchy, corruption, and all these different issues. I want to engage people in building better, more transparent processes, participatory mechanisms, and strategies for how we use wealth in the country — for example, the development aid we’ve received from the Venezuelan government — to create more sustainable development for the next generation.

In Haiti, land has particular significance for how people create their lives. But over the last 10 years, the government has been tempted to attract foreign investment in the country and put people out of their lands and livelihoods. They assume that the people don’t have a vision for how to develop the land. And these development projects are not helping us. The money is not going where it needs to. This is really bad, because Haiti is very affected by climate change. We’re facing a very long dry season, we don’t have enough wind power, and people are having to figure out by themselves — with no support from the government — how to make things more sustainable for the future.

Q: Tell us more about the work you’ve been doing on LGBTQ rights in Haiti.

NB: I work for social change that is anti-patriarchy, considers gender, race, and sexuality, and addresses social inequality. I’ve been a human rights activist for 15 years, and for a while, I never heard about LGBT rights as part of human rights coverage. But after the earthquake, the LGBT community came more out into the open and were demanding their rights to live free of violence, discrimination, and stigmatization. As a part-time consultant for the American Jewish World Service, I served as a capacity-builder, link-builder, and advisor for LGBTQ activists. My strategy was and is to immerse myself in those communities, understand their daily lives and challenges, and integrate them more into social justice movements.

There’s so many things to address with collective leadership and capacity-building in LGBT groups. And the Senate just approved a law criminalizing homosexuality. This is very worrying, but even so, no one can deny that we’ve made huge progress. There were three LGBT organizations when we started. There are 25 now. You see more people doing media stories about LGBT couples, starting to talk about adoption for LGBT couples, etc. You can see the LGBT movement starting to integrate into broader social movements, like the anti-corruption movement, and you can see LGBT activists being invited to share their views in other activism spaces.

Q: What are the biggest challenges and opportunities you see in your work? What are your goals for the near future?

NB: Corruption affects everything. I hear people say that Haiti is a very unequal county and no one’s working to change things. But that’s not true: there’s a lot of work being done — it just needs to be coordinated better. Right now, we deal with a lot of interference from international actors, who bring in money without thinking about the consequences and without coordinating with each other. This means that money is wasted and we’re not contributing overall to rectifying inequality in the country.

The interference of international groups and governments also causes problems for human rights activists. For instance, I’ve seen international actors try and fragment the LGBT community by mandating too much specificity about which issues they want to address, such as rights for non-transgender LGBT individuals vs. rights for trans people. We need to move forward with a social justice movement that is inclusive and does not have stigmatization and discrimination — that provides power to marginalized people and gives them control of each thing that will happen in their daily lives.

We also need to have spaces for professional activists, organizers, and service providers to talk more about their issues and build solidarity, and to educate new generations of activists. We started to do this – we had an international dialogue about creating non-discriminatory mechanisms to protect LGBT people. But we need to do more. For instance, we have to address the fact that in Haitian universities, there are no books on gender and sexuality!

NB: I encountered the Lowenstein Clinic after the earthquake. We worked with the Clinic, along with independent journalists and researchers, to organize a very strong resistance movement against the government’s efforts to open up Île-à-Vache, an island off the southern coast of Haiti, to tourism. It was a beautiful island with no motorcycles or cars, where people lived on fisheries. The government tried to make the land available to foreign companies to build a golf course, an international airport, and agrobusiness projects. With the Clinic’s help, we blocked the project from developing.

I wanted to come to Yale to learn English and get immersed and meet new people. Now I feel there’s a commitment to move forward on so many other aspects. I’m already talking about next steps with people. I’ve really enjoyed my time here — meeting so many people, forming network of interested people with whom I can keep doing my work. It’s also always a great opportunity to be able to talk about my work and our challenges, so that we can get more support and contributions.