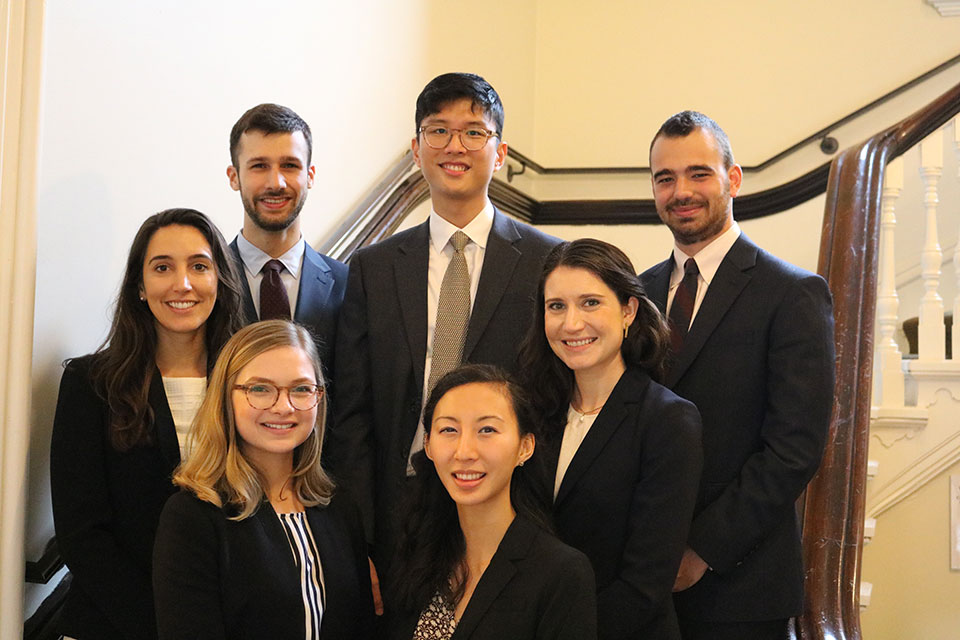 Seven Yale Law School students are among the 20 newly named Kerry Fellows who will work with former Secretary of State John Kerry on pressing global challenges as part of Yale University’s Kerry Initiative in partnership with the Jackson Institute for Global Affairs.

Elizabeth Allan is copresident of the National Security Group at Yale Law School, a features editor for the Yale Journal of International Law, a member of the Entrepreneurship and Innovation Clinic, and a member of the International Refugee Assistance Project. She is passionate about developing strategies for inclusive and sustainable economic growth at both the community and global levels. During her summer, she worked at the Public International Law and Policy Group where she assisted clients in the Middle East on transitional justice and post-conflict institution building. Before law school, Elizabeth worked for two years as an Associate at McKinsey & Co., where she served public and private sector clients across three continents while based in the Middle East. Elizabeth has also interned at the Democracy Program of the Carter Center and volunteered for an NGO in Jordan providing refugee services. Elizabeth has undergraduate degrees from the University of Georgia in International Affairs, Arabic, and Economics. She also holds an M.Phil. in Modern Middle Eastern Studies from the University of Oxford, where she studied as a Rhodes Scholar.

Andrea de Sá is a graduate of Princeton’s Woodrow Wilson School of Public and International Affairs and a J.D. candidate at the Yale Law School. She serves as a Student Director of Yale's Supreme Court Clinic, as a Coker Fellow in Constitutional Law, and as a Student Director of the Center for Global Legal Challenges. While in law school, Andrea has focused on international law, through experiential work at the Department of Defense, Department of State, Department of Justice, and at WilmerHale. Andrea also pursues projects exploring the nexus between international law, national security, and technology, drawing on her pre-law experience working in Silicon Valley and in the Beltway.

Katherine Fang is a J.D. candidate at Yale Law School. Previously, as a Fulbright scholar in Jordan, she undertook consultancy projects for the United Nations Development Program’s Middle East Regional Office. She then served as an economics research associate at Harvard Business School. At HBS, Katherine supported studies of the future of work and its intersections with gender, firm policy, and criminal convictions. She has also previously worked as a consultant for the Senior Regional Advisors to the Middle East and to Sub-Saharan Africa at the International Organization for Migration headquarters in Geneva. She holds a B.A. from Yale College in Global Affairs and in Modern Middle East Studies, with distinction in both majors.

Max Goldberg is a first-year student at Yale Law School. He is interested in the law as a tool of American foreign policy in an era of faltering democracies, asymmetric warfare, and climate change. Before law school, Max was an Associate at Dalberg Advisors, where his practice focused on crafting policy for governments and corporations to support economic resiliency in emerging and frontier markets. In May 2017, Max graduated summa cum laude from Yale College with a B.A. in Ethics, Politics, and Economics. After graduating, Max was a Schwarzman Scholar at Tsinghua University in Beijing, where he earned an M.M.S. in Global Affairs and Public Policy.

Annie Himes is copresident of the National Security Group at Yale Law School, a first-year editor on the Yale Law Journal, and a member of the Peter Gruber Rule of Law Clinic. Before law school, she worked as a Junior Fellow in the Russia and Eurasia Program at the Carnegie Endowment for International Peace, where she analyzed the Kremlin’s resurgent foreign policy since Putin’s return to the presidency in 2012. She also spent a year as a Fulbright Scholar at Saratov State University in Saratov, Russia, where she taught English. In 2016, Annie graduated summa cum laude and Phi Beta Kappa from the University of Nebraska-Lincoln with degrees in Russian, global studies, and history. She was named a Harry S. Truman Scholar in 2015 for her commitment to public service.

Brian Kim is an editor of the Yale Law Journal and Yale Journal of International Law and on the board of the Paul Tsai China Center and Yale Law & Business Society. He earned his undergraduate degree from Princeton University, graduating summa cum laude and Phi Beta Kappa in the Woodrow Wilson School of Public and International Affairs. Prior to law school, he received a Master’s in China Studies from Peking University where he studied as a Yenching Scholar. He has previously interned with the Center for Strategic and International Studies (CSIS), State Department’s Japan Desk, and Choson Exchange in Singapore, working on policy challenges involving China, Japan, and the Koreas.

Isa Qasim is interested in U.S. foreign policy and its connection to domestic politics, policy, and law. At the Law School, he is a Coker Fellow, an editor for the Yale Law Journal, and a member of the Allard K. Lowenstein International Human Rights Clinic. Previously, he served on the board of the National Security Group and as an editor of the Yale Law & Policy Review. He has held legal internships at the State Department Office of the Legal Advisor, the Southern District of New York U.S. Attorney’s Office, and Kirkland & Ellis LLP in Chicago. Prior to law school, he managed an international development project in the West Bank and worked as an investment associate at Bridgewater Associates. A Chicagoland native, he was also an inaugural member of the Obama Foundation’s internship program. After law school, he plans to clerk for Judge John M. Walker, Jr. of the Second Circuit.

The Kerry Initiative is an interdisciplinary program focusing on pressing global challenges through teaching, research, convenings, and international dialogue. Kerry Fellows work with Secretary Kerry and his team on key projects for the Initiative, including conducting research, assisting with conferences on international topics, and helping write journal publications and social media content. The 2019–2020 Kerry Fellows represent several of Yale’s professional schools, including the schools of Medicine, Forestry and Environmental Studies, Law, Management, the Graduate School of Arts and Sciences, and the Jackson Institute for Global Affairs.