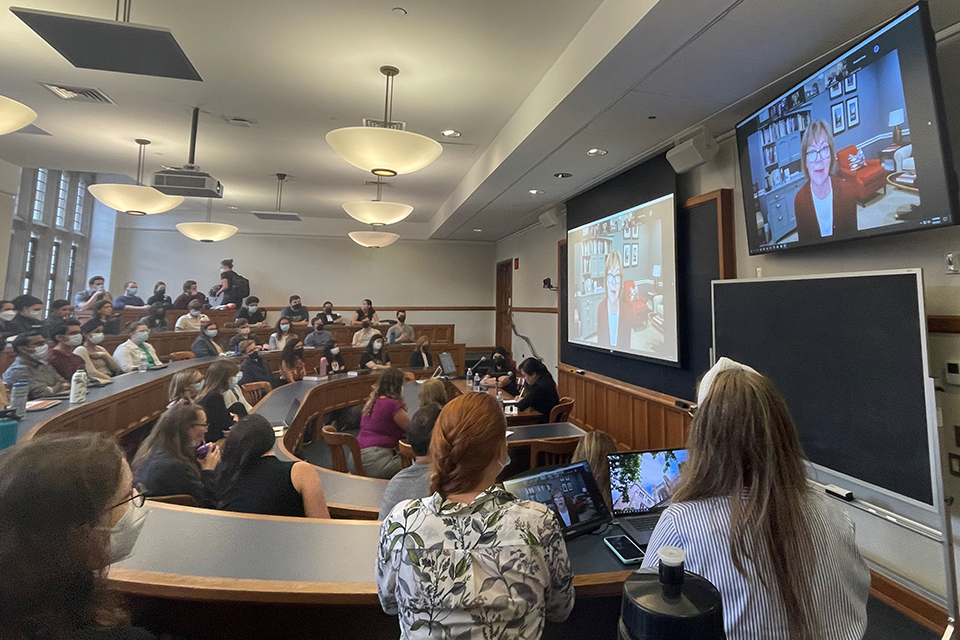 The Solomon Center for Health Law and Policy hosted its kickoff event of the semester on the state of reproductive rights following the fall of Roe v. Wade. The Sept. 7 event — co-sponsored by the Yale Health Law & Policy Society (YHeLPS), the American Constitution Society, and If/When/How: Students for Reproductive Justice — explored the impact of the Supreme Court’s recent decision in Dobbs v. Jackson Women’s Health Organization taking away the constitutional right to abortion, abandoning nearly 50 years of precedent, and paving the way for states to restrict reproductive health care services.

The panel, “Roe Fell: What’s Next for Lawyers and Advocates?” brought together reproductive justice policymakers, advocates, scholars, and litigators. Organized by Doménica Merino ’24, Cat Gassiot ’24, Laura Hallas ’24, and Abigail Bessler ’24, the event provided students with an overview of the Dobbs decision, its impact, and what experts see as the way forward for reproductive rights.

First, U.S. Sen. Tina Smith, who once served as Vice President of Planned Parenthood in Minnesota and has led efforts in Congress defending the right to abortion, spoke about work being done at the national level in the wake of Dobbs. She talked about the severe impact of the decision on access to abortion care across the country, as well as her bill to protect access to medication abortion. She also took student questions about the possibility of federal legislation protecting the right to abortion.

Next, students heard from panelists who offered three other distinct perspectives on the issues at hand. Professor Khiara M. Bridges, who teaches at UC Berkeley School of Law, provided a historical overview of Targeted Regulation of Abortion Providers (TRAP) laws and a critique of the Court’s legal reasoning in Dobbs. She also laid out the implications of the decision for marginalized communities and for other constitutional rights that may be affected.

Next, Maleeha Aziz, an abortion storyteller with WeTestify and a community organizer with the Texas Equal Access Fund, spoke about the barriers to care that existed before Dobbs by sharing her own experience seeking abortion care. She also described the devastating impact of SB8 and Dobbs on those seeking abortion care in Texas and the challenges for advocates on the ground.

Finally, Jenny Ma, a senior litigator at the Center for Reproductive Rights, talked about her experience working directly on the Dobbs case and now on active challenges to state abortion bans, as clinics are forced to close, leaving whole regions of the country without access to care. She also spoke about how law students and lawyers can support ongoing efforts to address the needs of those most impacted by this retrenchment.

The panel was followed by a reception, at which students and faculty interested in health law and policy got the chance to meet the panelists for further discussions.