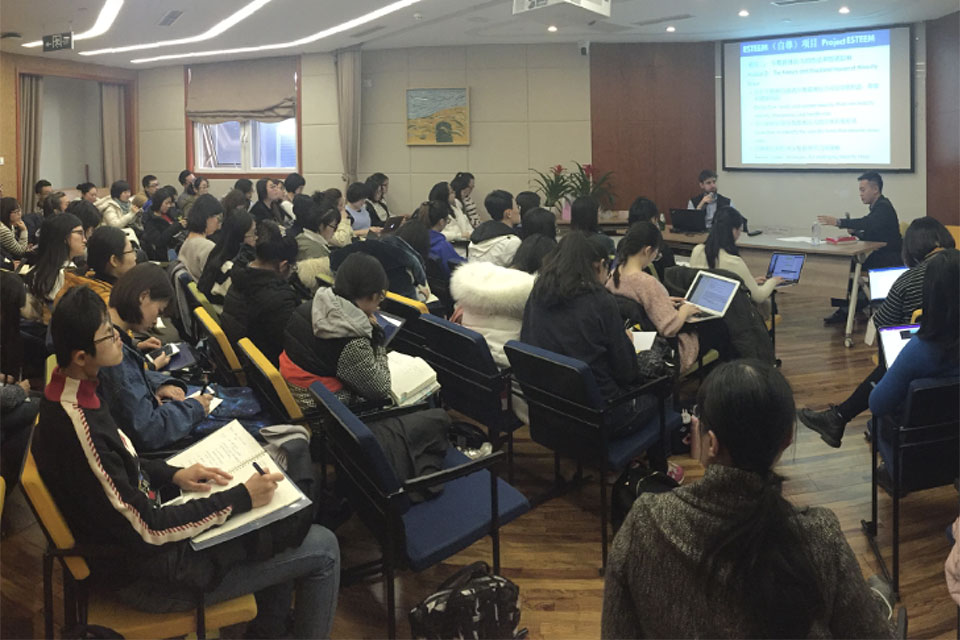 Dr. Charles Burton from the Yale School of Public Health trains students and faculty at Beijing Normal University in the LGBT-affirmative therapy ESTEEM.

The Chinese Psychiatric Association officially declassified “homosexuality” as a mental illness in 2001. A decade later, however, the Beijing LGBT Center (北京同志中心) saw that stigma was still pervasive throughout the mental health profession.

“We found that many people had suffered through conversion therapy or had therapists who completely didn’t know what being LGBT was or how to deal with LGBT clients,” said Cai Yao (蔡瑶), a program manager at the Beijing LGBT Center. “Many of our members wanted mental health counseling, but they weren’t willing to see a therapist.”

To meet the community’s need for safe and effective mental health counseling, the Beijing LGBT Center started building a network of LGBT-friendly therapists in 2012, a network which now has more than 600 members. Despite its growth, the network can feel like a drop in the ocean of China’s approximately one million certified mental health counselors. Striving to scale up, the Beijing LGBT Center has sought cooperation with universities, professional associations, and online education platforms to raise awareness of LGBT issues across the profession.

“After declassification in 2001, there was little investment in training mental health counselors on sexual and gender diversity,” said Darius Longarino, Senior Fellow at the Paul Tsai China Center, who has worked closely with LGBT advocates in China. “There was a top-level decision but little follow-up, so civil society stepped in to take the lead. The question now is whether NGOs can get establishment stakeholders to speak up for LGBT people.”

According to Longarino, supporting research, education, and engagement with influential experts in China is how organizations outside of China, such as universities or professional associations, can be most helpful. “Even in the United States, research on LGBT-affirmative therapy is quite new, and, in China, researchers often avoid the topic because of its perceived political sensitivity,” Longarino said. “Advocates in China could use more support in accessing empirical research and international best practices and getting LGBT issues on the radar of leaders in the field.”

To this end, the Tsai Center has been facilitating workshops in China on ESTEEM, a pioneering LGBT-affirmative therapy developed by Professor John Pachankis at the Yale School of Public Health. “Because of social stigma, sexual and gender minorities disproportionately experience much higher rates of mood and anxiety disorders,” Professor Pachankis said, explaining the theoretical framework behind ESTEEM. “Professional organizations such as the American Psychological Association have issued treatment guidelines based on this insight, but ESTEEM is one of the first attempts to translate these general guiding principles into concrete practice.”

In July 2017 and January 2018, respectively, Professor Pachankis and his colleague Dr. Charles Burton shared research on ESTEEM with faculty and students at several universities throughout China, including Beijing Normal University, Central South University, Central China Technology University, and the Chinese Academy of Sciences Institute of Psychology.

Wang Yun (王芸), the manager of the Beijing LGBT Center’s mental health counseling program, believes ESTEEM could inspire similar models in China. “This empirically based, systematic, and practicable intervention is very lacking in China and has great importance as a guide for us,” she told the Tsai Center. “However, the ESTEEM model is based on U.S. research and would need to be adjusted to fit the Chinese context.”

Professor Li Xianhong (李现红) of the Central South University Xiangya School of Nursing (and former visiting scholar at Yale in 2007) was interested in doing just that. An experienced researcher who has studied LGBT- and HIV-related stigma in China, Professor Li was immediately struck when she encountered the ESTEEM model. “When I saw ESTEEM I thought, ‘I have always wanted to do something like this,’” Li said. In coordination with Professor Pachankis and the Tsai Center, Li initiated a project to test ESTEEM’s feasibility in China, starting this year. She envisions this as the first step in localizing and promoting ESTEEM throughout the country.

The recent workshops featuring Dr. Pachankis and Dr. Burton also contributed to the building of new networks within China. According to Cai, researchers at Beijing Normal University’s School of Psychology and the Chinese Academy of Sciences Institute of Psychology have begun working with the Beijing LGBT Center on a number of new LGBT-related mental health research projects—opportunities that resulted from connections made at the workshops.

The Beijing LGBT Center hopes these kinds of research collaborations can slowly but surely build a critical mass of support among key stakeholders in the mental health profession. Then these professionals would be positioned to take action—for example, by integrating LGBT-affirmative therapy into psychology textbooks or continuing education programs.

During his trip, Dr. Burton admired the advocates’ efforts, especially in such a challenging environment. “Behind your laptop at Yale, it’s easy to forget the impact research can have in the real world,” Dr. Burton shared. “It was inspiring to see how advocates used social science research to catalyze crucial discussions about the dignity of LGBT people in China.”