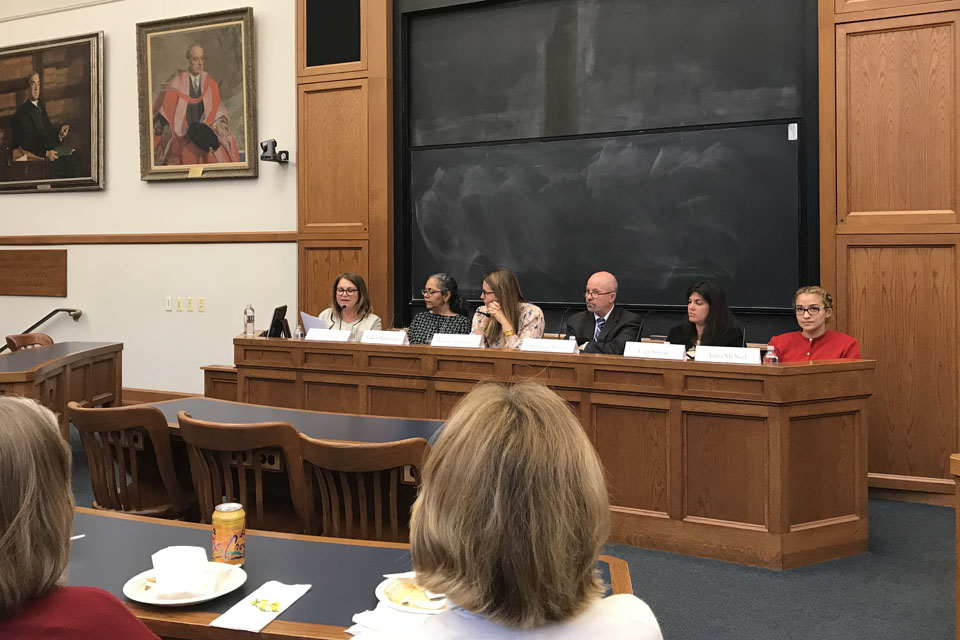 Addressing a large room filled with people from across the Yale Law School, Yale University, and New Haven communities, each panelist spoke about diverse problems labeled as “sexual harassment” and the ways to address them effectively. Professor Schultz set the stage for the discussion by theorizing harassment. She called upon the #MeToo movement and the media to adopt the broader legal definition of sexual harassment that includes not only unwanted sexual advances, but any conduct that demeans or excludes people because of their sex— including many non-sexual forms of sexism and mistreatment such as gender-based ridicule, social ostracism, non-sexual assault, and work sabotage. Focusing narrowly on sexual misconduct alone erases these everyday forms of harassment, which research shows are far more prevalent than unwanted sexual advances and particularly harm women in male-dominated settings, LGBTQ people, and others who defy conventional gender norms. Theoretically, Schultz explained, harassment is an expression of entrenched workplace sexism and a desire to maintain masculine work superiority and identity—not sexual desire or gratification. Professor Schultz urged lawmakers and advocates to build on the momentum of the #MeToo movement to challenge sex segregation and unchecked, subjective authority—two key structural causes of sex harassment at work and on campus.

Professor Hernández shared scholarly research showing that women of color experience greater amounts of sexual harassment and more severe harassment than white women. She noted that women of color often fear retaliation and so bypass reporting harassment to their employers, going directly to the Equal Employment Opportunity Commission, the federal agency tasked with enforcing the federal laws against workplace discrimination. Unfortunately, in doing so, they often lose the right to proceed in court and obtain compensation from their employers, because Title VII jurisprudence requires complainants to give employers the opportunity to redress hostile work environment harassment before proceeding in court, she said. Hernández said that women of color are also barred from relief on the ground that they “welcomed” harassment due to stereotypes about their sexuality. Professor Hernández emphasized the courageous and historic role women of color had played in challenging sexual harassment and contributing to the development of sexual harassment law.

Rachel Tuchman of the law firm Kaplan & Co. spoke about the formation of and her involvement in the #TimesUp Legal Defense Fund, a $21 million fund intended to support lawyers in bringing affirmative sexual harassment cases and defending victims from retaliation, defamation, or other defensive claims. Often lawyers will not accept sexual harassment cases, she said, because victims cannot pay high hourly rates and fees that are contingent on winning in court will not be high enough if the accused employer is not wealthy or high-profile. The Legal Defense Fund aims to remove these barriers to justice for harassment victims. #TimesUp is also involved in other policy and advocacy initiatives, such as its recently successful formal request to the New York Attorney General’s office to investigate the controversial prosecution of Harvey Weinstein.

Attorney Shannon Minter of the National Center for Lesbian Rights spoke of the disproportionately high rates of sexual and non-sexual violence, harassment, and discrimination against LGBTQ adults and youth in a variety of settings, including work, school, family, prison, and health care. Research shows that some of the most vulnerable populations are LGBT women, particularly women of color. They are more likely to be harassed at work, incarcerated at extremely disproportionate rates, face some of the greatest violence when trying to use restrooms, and are also disproportionately targeted in student discipline cases. Minter emphasized that unintended consequences on vulnerable populations such as the LGBTQ community must be taken into account when crafting legal and policy reforms to address harassment. Zero-tolerance harassment policies that ban all sexual conduct and prohibit dating co-workers, for example, tend to backfire and disproportionately target LGBT workers and students as harassers because of stereotypes that they are sexually predatory.

Attorney Cari Simon of the Fierberg National Law Group spoke next about Title IX, the federal statute that provides that “[n]o person in the United States shall, on the basis of sex, be excluded from participation in, be denied the benefits of, or be subjected to discrimination under any education program or activity receiving Federal financial assistance.” Simon explained that this statute gives students of all genders robust rights to obtain institutional responses to instances of sexual assault, harassment, and sex discrimination that interferes with their educational experience. According to Simon, lawyers can and should use Title IX creatively to help victims get the support they need. Such support can include academic accommodations, such as finding alternate ways to meet course requirements or getting poor grades removed from a transcript that were the result of assault-related trauma, as well as fair disciplinary procedures that ensure perpetrators are held accountable for their actions.

Student activist Anna McNeil of Engender spoke of her student organization’s work at Yale University to gender integrate all-male fraternities, given their disproportionate impact on social life on campus and on economic opportunities after graduation. Fraternities facilitate professional networks for their members, providing career opportunities to elite male students unavailable to female and nonbinary students. Furthermore, research shows fraternities foster higher rates of sexual assault and harassment on campus, McNeil noted. Sex segregation by fraternities creates climates on campuses across the country where demeaning views about women are rampant, teaching young men to feel entitled to women’s sexuality and driving heightened rates of sexual violence. Based on their own experiences and on empirical research, McNeil and her colleagues argue that integrating women fully into fraternities is a fundamental and necessary step to make those fraternities and the surrounding campuses less dangerous and discriminatory places for current and future generations of college students.