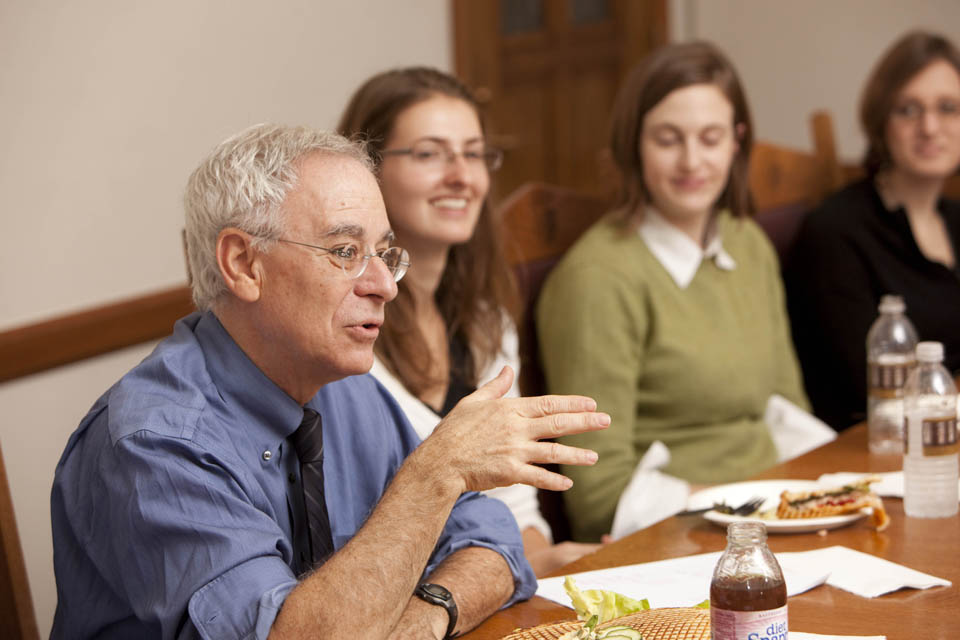 In the eight years that Dean Robert C. Post ’77 has been at the helm of Yale Law School, he has solidly entrenched the School’s position at the forefront of legal education.

Post, a leading First Amendment and constitutional law scholar, began his tenure as Dean in 2009 immediately following the Great Recession. He was determined to work with faculty, staff, students, and alumni to deepen the School’s commitment to scholarly excellence, bolster its academic reputation, and enhance the students’ educational experience. In 2014, he was reappointed for a second term after being widely praised for his vision and leadership. Following two terms in office, Dean Post will step down in June 2017 to focus on his teaching and scholarship.

“My general philosophy is that the faculty and students should take ownership of the place,” said Post. “This was never about me personally. What I wanted is to create the structures that would allow others to thrive and flourish.” — Dean Post

“His clear and steady vision helped ensure the Law School flourished even in the face of one of the worst financial crises in decades and during tumultuous times for legal education around the country,” said Kate Stith, Lafayette S. Foster Professor of Law who served as Acting Dean in 2009 before Dean Post was selected.

“We will always be grateful for Dean Post, who stepped into the leadership role when the school most needed him,” said Professor Heather Gerken, who will become the new Dean of Yale Law School on July 1, 2017. “He has been an intellectual leader for Yale as it hired its next generation of faculty, and he has done a great deal to strengthen the Law School.”

During his two terms as Dean, Post hired 18 new faculty members whose areas of expertise include tax law, health law, criminal law, and legal history, to supplement an existing faculty of brilliant scholars from across all generations.

“Dean Post's commitment to the Law School's intellectual excellence and national leadership was evident in every aspect of his deanship,” said Professor of Law Abbe Gluck ’00, who was hired under Post’s tenure, “from his tireless efforts to recruit and support new faculty, to all the new academic courses we launched during his tenure, to his vision in establishing the many new centers that have positioned YLS at the forefront of teaching, scholarship and real-world impact in areas of national policy ranging from health care, to criminal justice, to national security.”

To build upon the School’s reputation as a leader in training the next generation of legal scholars, Post created a first-of-its-kind Ph.D in law program in 2012. This innovative degree program prepares students who have earned a J.D. degree from an American law school to enter careers in legal scholarship. Faced with a tightening teaching market, students in the program are better able to produce the rich and robust portfolio of scholarship necessary for success in the academic job market while contributing to the development of law as an academic field. The program graduated its first cohort last year.

“In the past few decades, legal scholarship has matured as an academic discipline,” said Post. “The natural next step for the legal academy was to create its own Ph.D. program that can focus on the questions and practices of the law itself.”

Post also championed an expansion of the School’s experiential learning opportunities and created new business simulation courses to provide students with hands-on training in business practice. He created the position of deputy dean for experiential education, oversaw the growth of new and innovative clinics, and provided an environment for students that enabled them to develop creative solutions to real-world problems.

“The priority was to integrate experiential and non-experiential learning,” said Post. “I have a very pragmatic understanding of education. I believe that theory should emerge from practice.”

“During his tenure, Robert’s steady hand guided the transition in personnel from the ‘founding generation’ of clinical faculty at Yale to a dynamic new cohort that will lead our program for years,” said Wishnie. “In addition, he supported the development of an exciting suite of business practice courses that brings top global practitioners to New Haven to offer vital experiential training for more corporate and transactional-minded students.”

Wishnie noted that Post also worked to secure institutional, regulatory, and other reforms, such as a new rule easing admission of faculty to the Connecticut bar, so as to facilitate the growing number of clinical courses taught by academic faculty.

Outside of academics, Post has worked to provide strong investments in the future of the school. While leading the School out of a financial crisis with a significantly reduced endowment and budget, Dean Post still managed to expand programs, centers, and initiatives through effective fundraising and careful management of the School’s finances. Under Post’s leadership, the Law School secured approximately $270 million in new gifts and commitments to enhance the academic and student experience.

As part of this dedication to investing in the future, Post spearheaded a major initiative to bring back dormitory living to Yale Law School for the first time in years, securing a $25 million gift from Christina and Robert C. Baker ’56 B.A., ’59 LL.B. to obtain and renovate a University-owned building at 100 Tower Parkway. With this leadership gift, the building has been renamed Robert C. and Christina Baker Hall at Yale Law School. Post also helped raise additional funds to cover the entire cost of the project, which will break ground this summer. When completed, the four-story mixed-use facility will house student dormitory space, community space, and offices for intellectual centers.

“For years, dormitory living was an essential part of student life at Yale Law School, and it remains a memorable experience for scores of alumni,” said Post. “This building will combine living and learning spaces for students that will enhance collaborations and deepen relationships among community members.” It will also contain a conference center and additional classrooms.

Additional major gifts that were secured during Post’s tenure helped create or expand key centers at the law school, including the newly renamed Paul Tsai China Center; the Abdallah S. Kamel Center for the Study of Islamic Law and Civilization; the Solomon Center for Health Law & Policy; the Justice Collaboratory; the Center for Private Law; the Gruber Program for Global Justice and Human Rights; the Media Freedom and Information Access Clinic; the Floyd Abrams Institute for Freedom of Express; and the Collaboration for Research Integrity and Transparency (CRIT). The Human Rights Program at Yale Law School also received generous investments from donors under Post, ensuring that rich opportunities in the field will be available in perpetuity. Two major endowment gifts also helped support the post graduate loan repayment (COAP), a program that enables graduates to pursue the careers that best fit their interests and skills without suffering undue financial burden as a result of student loans. When Post became Dean, 75% of the expenses associated with the COAP program — which represents a large financial commitment — were funded through general operating funds. As he leaves office in 2017, almost 75% of the expenses are funded through endowed gifts.

During a time when important conversations about diversity and inclusion began to take place at institutions around the country, Post sought to tackle these complex issues head on, engaging directly with students and faculty to improve the student experience for everyone.

In spring 2015, Post convened the Committee on Diversity and Inclusion and asked it to research issues and recommend initiatives to enhance diversity and inclusion within the Law School community. In March 2016, the Committee, composed of faculty and students, made more than 60 recommendations focusing on student and faculty diversity, mentoring and classroom climate, enhanced support for student and alumni groups, and methods to ensure ongoing progress on these issues. The administration has been actively working to implement these recommendations ever since.

“It is right and appropriate that we seize this extraordinary opportunity to rethink how our community lives, works, and learns,” Post said at the time. “We can always do more to ensure that all here feel welcomed, respected, supported, and included.”

To strengthen ties between students and alumni, Dean Post worked to cultivate relationships with alumni to ensure they felt connected to the Law School. Twice a year he hosted approximately 60 alumni members of the Executive Committee at the Law School for meetings, class visits, faculty speakers, and tours. The Dean engaged Executive Committee alumni to help plan the annual alumni weekend and to offer their views on current law school developments.

“This helped alumni feel relevant to the Law School of today and not just the Law School in the era they attended,” said Christine Adams ’94, President of the Yale Law School Association Executive Committee.

Adams noted how Post often traveled to meet with alumni like herself and was committed to keeping alumni informed of the many developments at the Law School.

“Dean Post made clear that the relationship he desired with alumni was personal and familial,” added Adams. “As a graduate, I felt connected, relevant and engaged and my affection for the Law School has only deepened since I graduated so many long years ago.”

Outside of the Law School community, Dean Post fostered many connections between the School and Yale University through a number of initiatives.

“Robert Post worked to integrate the Law School in interdisciplinary initiatives across the university,” said Yale University Provost Ben Polak. “We are grateful for his efforts to increase opportunities for students throughout the University to collaborate on important, substantive work. I have really enjoyed working with Robert. He is a superb scholar, a wise counselor, and a person of deep integrity and deeply ethical values.”

During his deanship, Post continued to teach and wrote two books, Citizens Divided: A Constitutional Theory of Campaign Finance Reform (2014) and Democracy, Expertise, Academic Freedom: A First Amendment Jurisprudence for the Modern State (2012). Post also published numerous scholarly articles during this time and was quoted and cited frequently in the press as an expert on First Amendment law.

Post joined the Yale Law School faculty in 2003 as David Boies Professor of Law. Prior to joining Yale Law School, Post taught law for 20 years at the University of California, Berkeley, School of Law.

Former Dean Guido Calabresi ’58 LLB said that Post is a wonderful person and that has always shone through during his deanship.

“His thoughtfulness and care for all of us has been a joy,” said Calabresi. “I will think again and again of all the times that he has been there when I, or other members of the faculty, have needed him.”

Calabresi said the Law School was lucky to have Post as its leader, but they will also be grateful to have him back as a scholar.

“He is such a good scholar, that one side of me also says what a delight it will be to have him come back, full time, to doing what all of us in this business love most — teaching and writing,” added Calabresi.

Post said despite an incredibly busy schedule as Dean, it was important to him to keep writing and teaching. “I love writing, that’s what I do,” he said. “And I find teaching so nourishing.”

Looking back at his time in office, Post said he hoped he would be remembered as being a steady and devoted force who made tough decisions to ensure the Law School has and continues to provide the best experience for law students anywhere in the world.

“My general philosophy is that the faculty and students should take ownership of the place,” said Post. “This was never about me personally. What I wanted is to create the structures that would allow others to thrive and flourish.”